Apple Strudel: the original recipe of the traditional Austrian dessert

Apple strudel is a traditional Austrian dessert made with a very thin, flaky crust that's rolled and filled with apples, raisins, pine nuts and cinnamon. Tasty and very fragrant, you can enjoy it at breakfast, as a dessert or snack together with a cup of hot tea and with a scoop of vanilla ice cream, a dollop of semi-whipped cream or a simple sprinkling of powdered sugar.

Making the apple strudel is very simple, it is important to roll out the dough as thin as possible to make it elastic and mouldable, and choose apples with a juicy, sweet and crunchy pulp like Golden, or Renette. So let’s find out how to make this classic version by following our instructions step by step.

What is Apple Strudel?

The apple strudel is a delicious dessert with a flaky crust and a spiced apple filling that will win over everyone, especially if served with a scoop of vanilla ice cream.

Apple strudel should not be confused with a streusel. A strudel has thin sheets of dough wrapped around an apple filling, while a streusel has a sweet and crumbly topping made of sugar, flour and butter like cakes.

Where does the Apple Strudel come from?

Apple strudel is a very popular dessert which belongs to the Viennese tradition and for this reason it is considered the Austrian national dish dating back to 1697 when the recipe was published for the first time in a cookbook. Although these origins, it is often mistaken for a German dish and associated to the Jewish culinary tradition.

Strudel can also be considered as a variant of ancient baklava recipe, a typical specialty of Turkey, made with layers of phyllo dough, dried fruit and honey. Following the conquests of the Turks, the dessert arrived in Hungary in the seventeenth century, where it became the current strudel with apples inside. It soon spread to Austria and then, with Austrian domination, to Northern Italy and in particular to Trentino Alto-Adige region, where it had great success thanks to the many apple crops in that area.

What are the best apples for Traditional Apple Strudel?

Choose an excellent quality of apples, with a juicy, sweet and crunchy pulp; we used the Golden variety, but the original recipe calls for the use of Renette.

Tips for the Best Apple Strudel

Initially the amount of dough may seem small, but it is essential to let it rest to get the maximum elasticity and to be able to roll it out very thin without the risk of breaking it.

You can add nuts, dark chocolate, dried figs or other oil seeds to the filling, add other types of fruit, such as pears, apricots, cherries, but also vegetables, cheeses and cold cuts for a delicious savory version.

How to store Easy Apple Strudel

The apple strudel can be stored at room temperature, under a glass bell, for 2-3 days even if, inevitably, after the first few hours it will tend to lose its fragrance due to the humidity released by the filling.

Can you freeze Apple Strudel?

Yes! Apple strudel can be frozen, both raw and cooked, for 1 month.

How to make Apple Strudel from Scratch

Prepare the strudel dough; pour the flour into a bowl and add the egg (1).

Mix initially with a fork (4) and then transfer the mixture to a work surface.

Form a smooth and homogeneous dough, quite soft and elastic (5).

Wrap it with cling film (6) and let it rest for 30 minutes at room temperature.

Peel the apples, cut them into slices and flavor them with the grated lemon zest (10).

Add the granulated sugar (11) and mix.

Heat a small pan and toast the pine nuts for a few minutes (13), turning them often.

Add the pine nuts to the apple filling and mix (14). Also add the squeezed raisins.

Take the dough back and roll it out with a rolling pin on the floured surface (15).

You will have to obtain a very thin sheet (16), so much so that you can almost see through it.

Transfer the pastry onto a cloth and grease the surface with 30 grams of melted butter (17).

At this point, also add the apple filling (19).

Leave a few centimeters of space on each side (20).

Fold the edges inwards by a few centimeters (21), so as not to let the filling come out when you form the roll.

With the help of the cloth, start rolling the dough from the long side (22).

Roll up to the end, trying to position the attachment of the dough below (23).

Still with the help of the cloth, transfer the apple strudel to a baking tray lined with parchment paper and brush the surface with more melted butter (24).

Remove the strudel from the oven, let it cool and settle for at least 3 hours, then sprinkle with powdered sugar and serve (26). 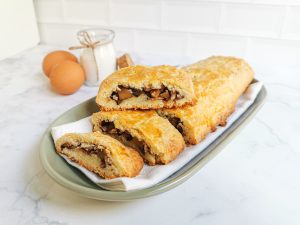 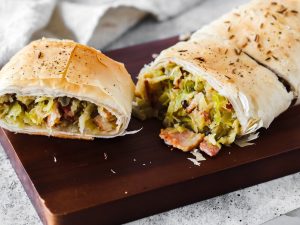 Easy 40min
Savory sauerkraut and bacon strudel: the recipe for the delicious and savory variant 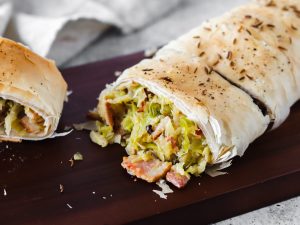 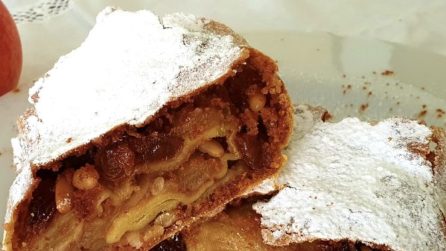 1.339 • by Recipe ideas
Apple strudel: the easy recipe to prepare a delicious dessert
502 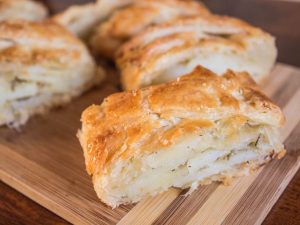 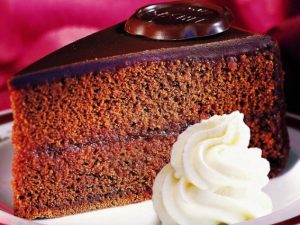