Apple Tarte Tatin: a classic french dessert that is sure to please!

This simple French-style apple tarte tatin consists of one layer of flaky pastry crust and a thick layer of caramelized apples. It’s made by placing caramelized apples with butter and sugar in the bottom of a pie dish and then topping with a buttery dough. After baking it like this, it is flipped upside down and served with the crust on the bottom and apples on the top. Hearty tarte apples like granny smith are the best to use in apple tarts like this because it will stand up well to the caramelization and baking.

The tarte tatin is a classic French dessert that started with two sisters named Tatin. The French sisters baked a tart upside down in their hotel kitchen and decided to go ahead and serve it that way. It has since become an eponymous classic baked in kitchens around the world!

How to make a French-Style Apple Tart

Peel and core your apples, then slice into quarters.

Start a caramel sauce in an oven safe skillet by melting butter and stirring in sugar. Let it dissolve and add the apples. Cook the apples and the caramel for several minutes, stirring often.

When the apples are soft and the caramel is to color and texture, top with pastry crust. Bake the tarte tatin in a preheated oven until the crust is golden brown.

Keep stirring the caramel and apples as they cook to ensure the apples are evenly cooked and the caramel won’t brown.

How to store Apple Tarte Tatin

This French tarte tatin can be left on the counter for a day or in the fridge in an airtight container or covered with plastic wrap for up to five days. If needed, it can be frozen in individual slices.

Heat the oven to 375 degrees fahrenheit.

Peel and core apples, then slice them into quarters.

Start the caramel sauce by melting butter in an oven-safe skillet on medium heat. Stir in the sugar and let it dissolve into a syrup.

When the mixture begins to bubble, add apples and salt to the skillet and stir, coating apples.

Cook the apples until the sauce darkens to a caramel color, stirring and turning the apples every few minutes. It will take about 12 minutes.

Remove pan from heat and arrange apples so the rounded sides are face down. Remove pie crust from the refrigerator and roll over hot apples, being careful not to touch the hot sauce or skillet. Tuck the edges of the pastry crust into the pan and poke holes to allow steam to escape.

Bake the tarte tatin in a preheated oven for 20 to 25 minutes or until the crust is golden brown.

Flip the tarte tatin. Run a knife around the edges to loosen the crust and separate it from the pan and shake the skillet to loosen the apples. Place a pie plate over the skillet and flip quickly and carefully, using oven mitts.

Lift the skillet away and scrap any leftover bits into the pie pan.

An old fashioned two-in-one apple peel and coring machine will assist in preparing the apples for the tarte tatin. 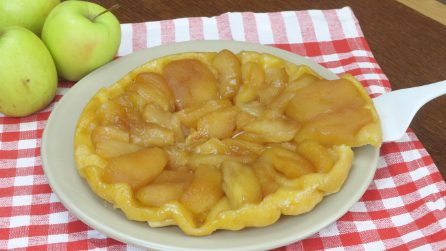 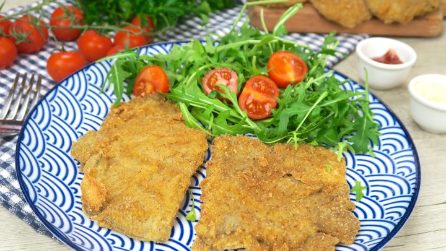 6.483 • by Cookist
Mushroom cutlet: this vegetarian recipe is sure to please everyone!
210 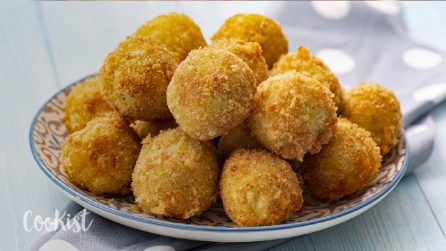 5.344 • by Food Inspiration
Crispy french fry croquettes: crispy on the outside, soft on the inside and sure to please everyone!
76 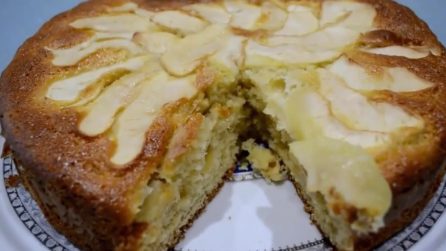 222 • by Love Kitchen
Apple Hazelnut Cake: A Delicious Dessert That Will Please All Palates
85 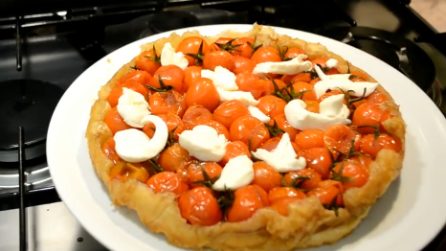