The falafel (in arabic: فلافل, falāfil; in Hebrew: פלאפל, falāfel) are a Middle-Eastern dish consisting of fried and spiced little meatballs of legumes. The most used ingredients are chickpeas, lentils, fava beans or beans, flavored with different spices, garlic and onion. In Middle-East falafel are mainly sold as street food, and they are eaten and tasted still hot just after frying. However, they can be made even at home, it will be enough to have some spices and a mincer, and that’s it! The recipe I propose is the chickpeas falafel, for which I used canned chickpeas, but you can also utilize dried chickpeas, the important thing is to bathe them in water for at least 12 hours before making your falafel.

Rinse the canned chickpeas, drain them and then put them in a bowl. Wipe them well with absorbent paper before putting them in the mixer. Add the clove of garlic, the chopped onion, the parsley and finally the spices: cumin seeds, sesame seeds, coriander, curry. Add salt and pepper and a handful of breadcrumbs. Mince until the dough has reached a homogeneous consistency and it is sufficiently dry and compact to touch: it is important that the dough is hard and not too moist, otherwise you will not be able to cook the falafel.

Make the meatballs, giving them a slightly crushed form, and place them on a sheet of baking paper (4). Heat up a bit of oil in a frying pan and cook the falafel (5), gently and repeatedly turning them, to obtain a uniform cooking. Serve your chickpeas falafel (6) still hot.

If you want to be sure that the chickpeas do not release water, before putting them in the mixer let them dry for about 5-10 minutes in a convection oven at 100 C.

To prevent falafel from collapsing during the cooking, do not immerse them in a too hot oil.

If your dough is a bit too soft, add more breadcrumbs or a teaspoon of potato starch.

Which sauce accompanies the chickpeas falafel?

Falafel, whether made with chickpeas or other legumes, according to the Arabic cuisine tradition are served in a soft pita and accompanied by sauces such as hummus and yogurt sauce.

To quickly make a hummus, blend 250 grams of pre-cooked chickpeas in a mixer, together with 100 grams of tahina (sesame cream), 150 grams of Greek yogurt, 6 drops of tabasco, 1 tablespoon of sweet paprika, parsley as much as it is needed, salt and pepper.

Yogurt sauce is really easy to make: take 100 grams of Greek yogurt, the juice of a half a lemon and mix. Add some minced mint leaves, a bit of extra-virgin olive oil and a pinch of pepper.

You can also utilize the tarator sauce: blend 300 gr of tahina (sesame cream), the juice of half a lemon, and add a crushed clove of garlic, salt and pepper. 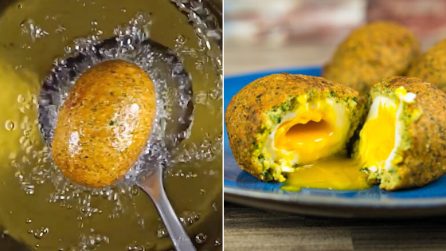 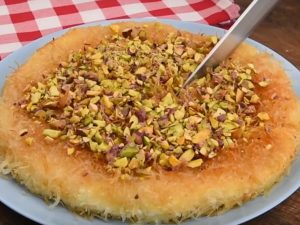 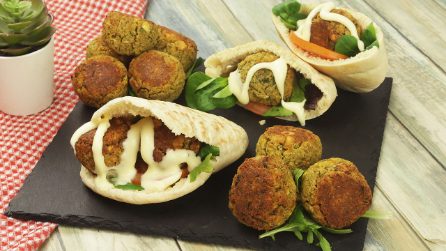 18.665 • by Hacks Inspiration
Falafel: from the Arab tradition, you will love these vegan meatballs! 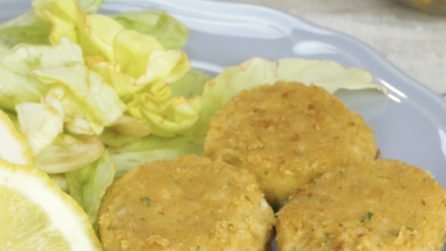 19.037 • by Cookist
Falafel: blend the chickpeas to make these delicious falafel balls!
255 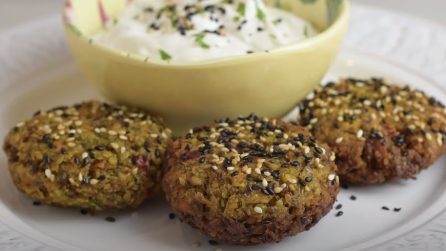 302 • by Recipe ideas
How to prepare delicious lentil falafel
80 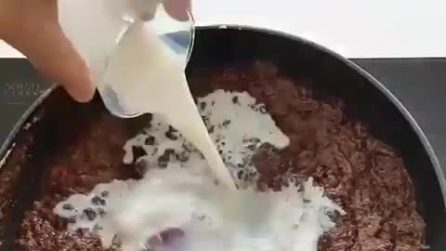