This is an easy and quick doner kebab recipe. It traces its origins back to Turkey where you will still find doner kebabs served as popular street food. Traditional doner kebab is layers of seasoned meat stacked vertically and cooked on a rotisserie. This Homemade doner kebab makes it slightly easier by making it in the oven.

Pork tenderloin (instead of traditional lamb or beef) and bacon are simply layered on top of each other and baked in the oven until golden. It’s served by slicing it from the top to create thin shavings of meat, and topping it with a sauce. You will love this easy twist on the traditional doner kebab.

What Is Doner Kebab?

Well, besides being delicious, a doner kebab is technically seasoned meat stacked vertically and cooked on a rotisserie. To serve, it’s sliced into thin shavings from the outer layer as the meat cooks.

Pork loin – even though the doner kebab is mostly eaten in countries where pork is not consumed, we modified this recipe for pork-lovers. Pork loin is tender enough for this recipe, so don’t substitute it with another cut that requires a long cooking time.

Bacon – doner kebab is usually quite fatty, so because the pork tenderloin is lean, we added bacon for extra fat. Use streaky bacon for best results, lean back bacon won’t work as well.

Marinade ingredients – because the pork tenderloin is so lean with little fat, it doesn’t have much flavor. This is why it’s essential to marinate the pork with these flavorful ingredients.

Pineapple – the fruitiness of the pineapple goes very well with the spicy and salty meat.

How To Make Homemade Kebab Doner

First, you will need to prepare the marinade. Mix together all the ingredients and pour over the pieces of pork tenderloin. Allow marinating for at least 20 minutes (and up to 24 hours).

After the pork tenderloin is done marinating, place it on a baking sheet lined with aluminum foil and alternate with layers of bacon. Insert a long wooden stick into the meat stack and top of with a piece of pineapple.

Bake until the meat is cooked through and golden. Serve with the remaining chopped pineapple and your favorite sauce.

This recipe will work with beef fillet, or lamb too.

You can prepare this recipe ahead of time. Simply marinate the meat the day before (you can safely marinate it for up to 24 hours), and prepare the pineapple. You can bake it on the day of serving.

The doner kebab is not the healthiest dish, but this recipe is slightly healthier than the traditional one which contains lots of added fat.

The doner kebab is traditionally served with a yogurt sauce. Simply mix together crushed garlic, mayonnaise, plain yogurt, a bit of olive oil, and za'atar.

Kebabs refer basically to meat on a stick and are enjoyed around the world, in all shapes and sizes. Here are some of the most popular ones:

Shish kebabs – they originate from Turkey, and are usually grilled cubed of lamb meat.

Seekh kebabs – these are enjoyed in South India and consist of minced meat cooked in a tandoor.

Chuan – this type of kebab comes from the Uyghur communities in China and is made from cubed lamb.

Is There a Difference Between Kebab, Gyros and Shawarma?

All the dishes are similar in that they are meat dishes cooked at high temperatures. Gyros and Shawarmas are derived from the Doner Kebab. The meats are usually served inside a fluffy flatbread, with hummus. Or in some countries, it’s served with French fries. But while they are similar, they aren’t exactly the same. Here is the lowdown:

Gyros are eaten in Greece. Meat is stacked on a vertical rotisserie, and is traditionally made from pork. It’s served with pita bread and a generous serving of tzatziki.

Shawarmas can be made with any type of meat, from chicken to goat. The meat is marinated in a mix of spices to give it a punch of flavor. While it’s served with hummus and tabbouleh, it’s not served with tzatziki.

How To Store Homemade Doner Kebab

The cooked doner kebab can be stored in the fridge for up to 4 days. It can also be frozen in an airtight container for up to 3 months. Allow to thaw in the fridge.

Preheat the oven to 190°C. Mix all the marinade ingredients in a small bowl.

Add the marinade to the meat. Marinate for 20 minutes.

In a baking sheet, place the meat on top of the other to simulate the top. Between layers place 3 to 4 strips of bacon according to size. Repeat until you finish with all the meat.

Insert a thick wooden stick in the center to hold the meat. Cut a thick cube of the pineapple and insert it to the top of the wooden stick to hold it.

The rest of the pineapple chop it into thin slices. Bake the meat top and turn constantly so that the cooking is even. Once cooked, remove and let stand a few minutes. Serve and accompany with corn tortillas, sauces and pineapple.

If you don’t eat pork, you can use chicken thigh fillets and turkey bacon. 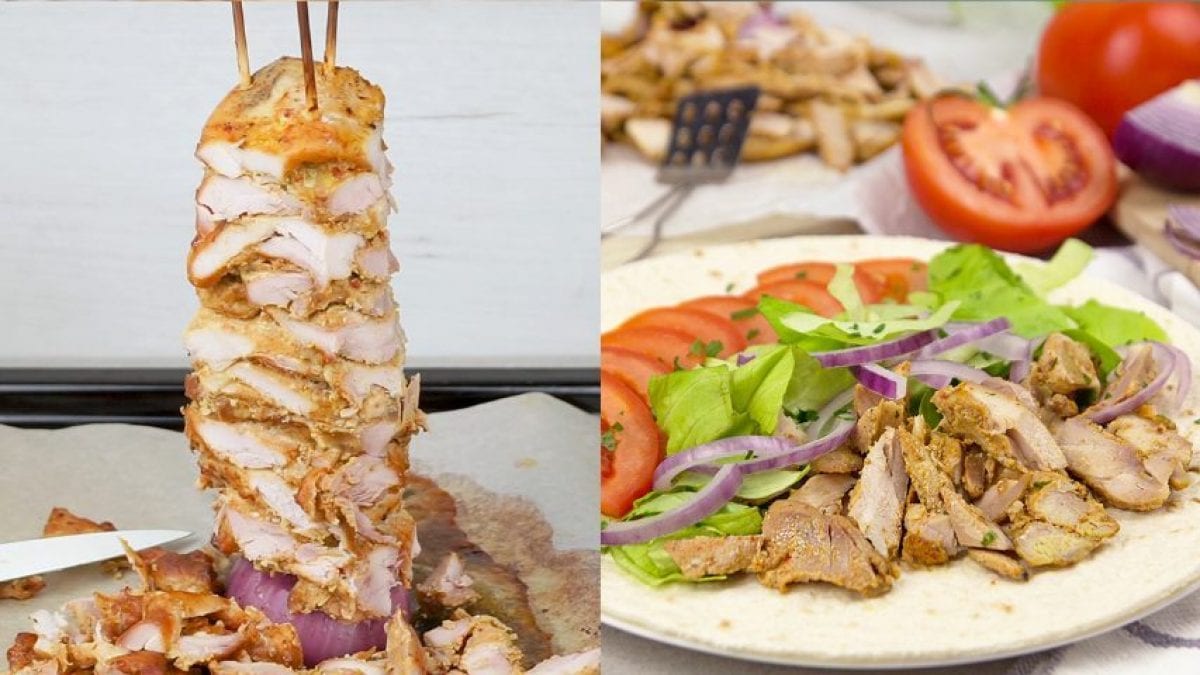 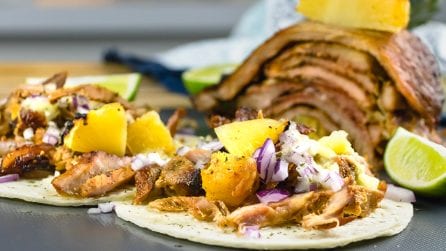 Homemade Doner kebab: how to make it step by step
Views
2.843 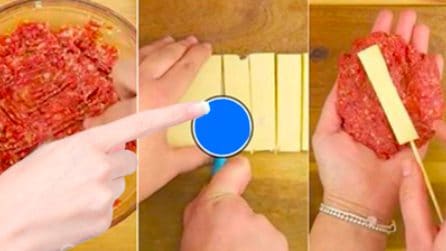 Meat kebabs: the recipe that the whole family will enjoy!
Views
221.751