Homemade Pastrami: what it is and how to make pastrami

Pastrami is a Jewish dish of Balkan origin. After being exported to America at the beginning of the 20th century it has become a very popular street food in a few decades. A beef-based dish usually served in a sandwich of rye bread with mustard and gherkins, to which you can also add cheese or your favorite sauces. Pastrami is a succulent, spiced and smoked meat, cut into slices and used to prepare tasty snacks. This soft and very tasty beef ham made the fortune of places like Katz's in New York, where the famous scene of the movie "When Harry met Sally…" was filmed, the scene in which the protagonist Meg Ryan fakes an orgasm while she is eating a succulent pastrami sandwich. For the preparation of pastrami, brisket is usually used, which through a long process is first put in brine, even up to 24 hours, and then smoked and steamed, and steamed with many tasty and fragrant spices. So let’s see how to make pastrami at home.

The pastrami was born in the Middle Eastern and Turkish countryside, and then in Romania where it became a delicacy and then a typical dish of Jewish cuisine. With the emigration of Jews in the early 20th century, pastrami began to spread in the United States, especially in New York. It is usually based on beef, but in the past, pastrami was also prepared with pork, mutton or goose breast. This dish was supposed to store meat in the best way and for a long time before the invention of the refrigerator. American pastrami has now become the main protagonist of overseas street food.

How to make Pastrami

Make the spice mix you will need for brine. Heat the black pepper grains, coriander and mustard seeds in a pan and then grind them into powder by pounding them in a mortar.

In a bowl, mix the powders together with the other spices for the brine (30 grams). Add the water, minced garlic and salt to the spice mix, put everything in a saucepan and bring to a boil.

Then let it cool to room temperature; your brine is ready. Dip the piece of beef in the brine, cover the pan with aluminum foil and let it rest for 8 hours or overnight.

Wrap the piece of beef in aluminum foil, making several layers, and bake it in a preheated oven at 110 degrees c for 3 hours or until the central part of the meat has reached 60 degrees C;  use a kitchen thermometer to check the internal temperature of meat.

Then let the pastrami rest in foil for an hour and a half. Then transfer it to the refrigerator for 5 hours and finally grill it.

First brown it in the oven for a few minutes and then place it on a preheated oven rack that is not resting on the bottom.

Finally, cut into thin slices and enjoy the pastrami in a hot sandwich. 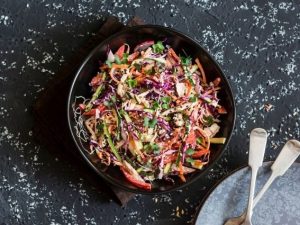 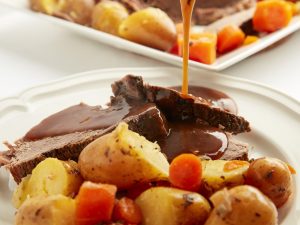 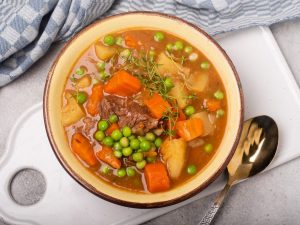 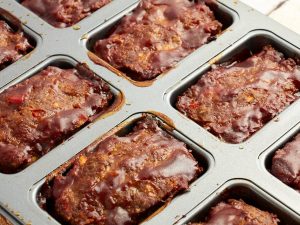 Easy 1h 15min
Gluten-free meatloaf: this recipe will surprise you
27 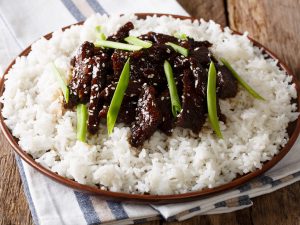