Here are all the answers to your questions on how to cook a mouth-watering fried food.

Frying is an ancient method of cooking that was already used by the Egyptians, but today few are those who really know how to make fried food in a perfect way. To have a crispy, light and non-greasy fried food, just follow some basic rules. From the choice of oil to temperature, from breading to the right pan to common mistakes not to be made; here are all the rules to follow for a perfect frying.

Crunchy, fragrant, light; the perfect fried food is not as difficult to make as it seems. But frying is one of those cooking techniques that cannot be learned "by intuition"; how can you not make it become greasy? When to put salt? Which pan to choose? Here are all the answers to your questions on how to cook a mouth-watering fried food.

1. Which oil to use for frying

First long-standing problem, which is the best oil for frying? There are many answers to this question, but one thing is certain; the fundamental rule is to consider the oil smoke point. The smoke point is the temperature above which the oil burns, because the part of fat begins to decompose; the oil begins to produce smoke and releases volatile substances that have been classified as "probably carcinogenic to humans" ( Group 2a) by the International Agency for Research on Cancer (IARC). For this reason it is essential to choose the right oil, because it affects the health of our guests.

So which oil to choose to fry? It is always better to opt for peanut oil that has an excellent resistance during cooking, even if the temperature raises too much; it is also cheaper than extra virgin olive oil and lighter both in terms of flavor and smell.

Today for frying we have also experimented with methods different than the more classic ones; for example, frying with glucose, which ensures perfect but fat-free frying,

When you are about to fry, never underestimate the preparation of the food; you can cut it into pieces or leave it whole, bread it or knead it, but you must never fry foods that are not dry. Even salt should never be added before, because it could cause the crust to lose its crispness.

3. The amount of oil and food

An element that can create problems are the quantities; how much oil to use for a frying? How much food to fry?

For oil, the proportion is easy; in theory, the amount of oil should be 10 times higher than the weight of the food. In practice, just check that the pieces are completely immersed in hot oil; frying with a little oil, in fact, often makes the fried food greasy.

The quantities of pieces to be fried are also important; in this case there is no rule, but it is good to remember to always fry a few pieces at a time, maximum 100 grams of product, especially in the case of breading, to avoid dirtying the oil.

4. Use the right pan (and maybe the kitchen thermometer too)

To really fry in the best way, the best thing is to buy a kitchen thermometer; in this way you will always be sure not to exceed the smoke point. They are quite cheap (depending on the model) and greatly simplify the operation; the same rule applies to the fryer, which, however, is more expensive.

If you don't have a fryer, don't worry; the important thing is to use a good pan, perhaps with high edges and a high bottom. The best for frying are those in iron, because they allow a more gradual heating of the oil, with a large and low shape and with straight edges. But aluminum and copper pans are also fine. We advise against steel pans, unless they have special coatings.

Each food has its own dress; this means that there are foods to fry as they are (not many in reality), foods that prefer flourings, others that prefer breading and others that are more suitable for batter.

Natural frying is a bit aggressive cooking and there are few foods that can be fried like this; eggs above all, but also potatoes. They are basically compact foods, able to withstand the heat of boiling oil; however, make sure they are dry.

The flouring can be done with a passage in the beaten egg or you can flour food directly: it is a method suitable for slightly more delicate foods such as fish and small molluscs, scallops, some types of vegetables such as eggplants.

Breading is one of the most popular methods. It can be done with one passage in the beaten egg and one in the breadcrumbs; in some cases also a first passage in the flour, a second in the beaten egg and a third in the breadcrumbs. This is the so-called Viennese method and allows the breading to detach slightly and swell, becoming more crunchy. The breading is suitable for preparations such as cutlet, chicken, pieces of rabbit, fish slices and boiled vegetables.

The batter is made with a mix of eggs (sometimes even just the egg yolk or only the egg white), salt, flour, water (even sparkling), that sometimes is replaced by beer or milk or they are directly added to. It can be used for both savory and sweet foods (in this case it is better not to add salt to the batter). The density must be such that lifting the mixture with a spoon it will have to fall back sticky and slowly. The ideal foods for this type of frying are vegetables and fruits of all kinds, but also fish with a strong flavor such as cod.

5. What to do while frying

During frying it is always good to remember to keep the oil temperature as constant as possible; to have a crisp and dry fried food, never fry too many pieces at a time. The food must be dry (as well as the hands) and must be inserted into the oil little by little, with a decisive movement, but never "thrown". Of course, if you can control the temperature well, it is not necessary to change the oil during frying, but it is absolutely forbidden to re-use it for subsequent frying.

6. Foam and grease: how to deal with them

If foam emerges, don't worry, the oil temperature is simply too low: just remove foam with a slotted spoon and wait for the temperature to rise. Another effect of a sudden drop in the temperature of the oil is that the food being fried tends to absorb much more grease, making it heavy and less crunchy.

To prevent the oil from burning when it has reached maximum heat, just do not leave it without any ingredient in frying. If, on the other hand, while frying, the oil temperature starts to rise excessively, it is not necessary to put more oil to lower it, it is better to put a piece of bread, which will allow a more gradual decrease.

For a physical process called osmosis, the salt tends to attract water; if it is put before frying, it will tend to moisten the external surface of the food, causing the friedness to lose its crispness. So, it is always better to put it just after frying, without waiting for the food to cool down.

And where to place the fried food just pulled out of the oil? Once straw paper was very popular, typical of street food, but today it is used less, especially because it is not recommended by the HACCP protocols as it is a very absorbent paper. In replacement, there is polyethylene-coated straw paper for food use, which is precisely covered with a thin layer of polyethylene, suitable for contact with food. The most common attitude is to use absorbent paper; it is not entirely correct because, if colored, for example, it can release substances dangerous to human health.

If you cannot use anything else, make sure you have a non-colored absorbent paper and change the sheet often, in order to avoid that the new fried pieces absorb the moistness of the previous pieces.

Finally, never cover the fried food after having put it to rest, or it will lose all its compactness.

8. How to handle stuffed fried foods

Frying a stuffed food is much more difficult; it is not only the oil that fries it, but also the temperature generated inside. It is always better to ensure that you have closed the edges of the food well and that you have not inserted too much liquid stuffing; in addition, during frying, it is necessary to turn it very often, in order to prevent it from frying only on one side and that on the other side the filling break the dough. 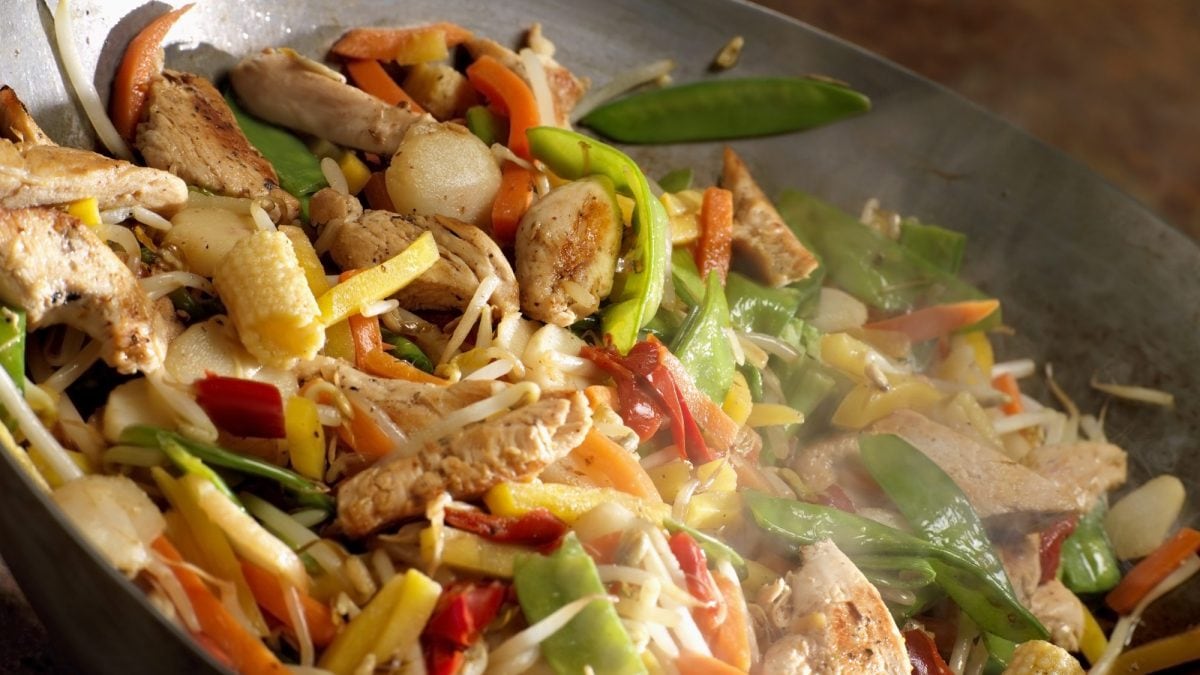 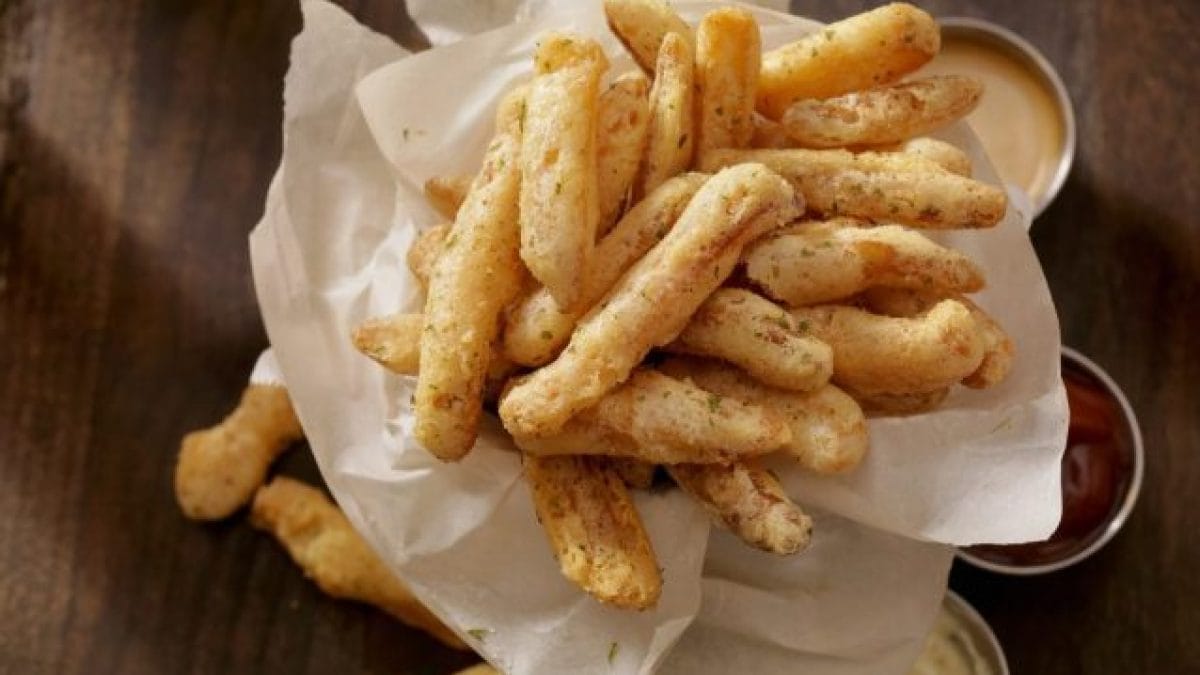 Recipes Perfect fry batter: the rules for a light and crispy frying
Low 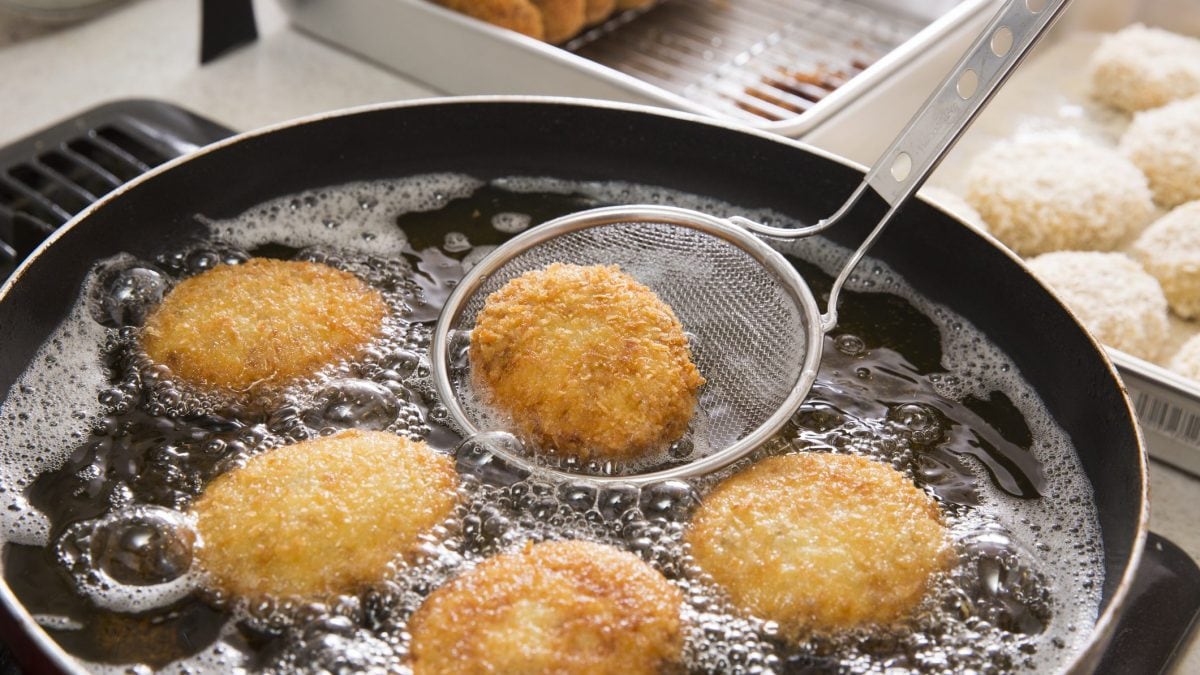