Here are some ways to cook them.

Read on to know about many ways in which you can cook chestnuts!

Chestnuts are mainly cultivated in Asia, Europe, and North Africa. These nuts are earthy in flavor and slightly sweet to taste. Some variety of chestnuts can be eaten raw but cooking these nuts bring out its rich and intense flavor. Here are some ways to cook them.

Cut each chestnut into half and then microwave it uncovered in a microwave-safe bowl for 2 to 5 minutes on the “potato” setting. Remove from its shell and serve.

read more
How to cook chestnuts with salt: the perfect method

Roasting in an oven

Preheat the oven to 200 degrees C. On each chestnut, either use a knife to make a crisscross (“X”) on the outer shell or pierce its shell several times with a fork for the steam to escape. Arrange these chestnuts in a single layer on a baking tray with the cut side facing up. Lightly sprinkle some water over them and then roast these nuts for 15-20 minutes or until chestnuts are tender. While chestnuts are roasting, you will have to move around a spatula on them a few times to prevent them from burning. Put them in a dry cloth, crush their outer skin, and then peel the skin away. Serve and enjoy.

Rinse chestnuts under running water and then make a crisscross on each nut. Place the nuts in a cast iron pan with the flat side of chestnut facing downwards. Now, place this pan on a high flame or a bed of glowing coals. Roast each side for about 5 minutes and shake the pan in between to roast them well on all sides. Slightly cool and serve.

Score each chestnut by making a crisscross mark on it and then add it to the boiling water. Boil chestnuts for 5-10 minutes. Cool slightly and then peel off the skin. Season the boiled nuts with butter or sprinkle some cinnamon over it and enjoy. 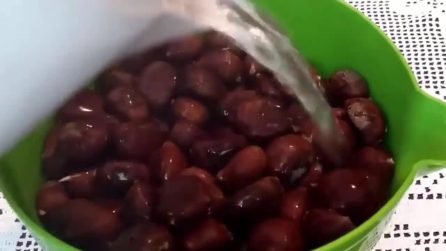 How to perfectly cook chestnuts
Views
1.013 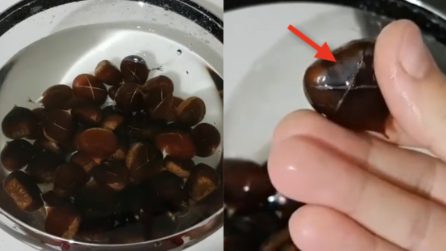 How to cook chestnuts: the tip to make them perfectly
Views
14.269 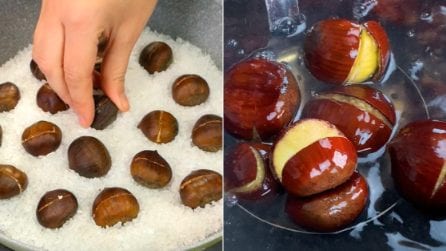