Cheese Filled Colombian Arepas: crisp on the outside and filled with tasty cheese

These crisp Colombian style arepas are crisp on the outside, and filled with tasty cheese. Instead of folding the dough over the filling into a half-moon shape, you put the cheese on one disc of dough, and cover it with another.

Making good arepa dough takes practice, and shaping them can be fiddly, but it doesn’t matter if they’re a perfect circle – they taste just as good whatever shape they are!

Preheat toaster oven or oven with rack in the center to 325°F.  A toaster oven comes in really handy for making these arepas!

Knead with your hands until a dough is formed.

Take a small amount and flatten it between your palms If the edges crack, knead in more water a tablespoon at a time until dough is supple and smooth but not sticky.

Season dough to taste with salt, then cover and set aside for five minutes.

Divide dough into eight even pieces and roll into balls.

Working on a wooden cutting board or a regular cutting board with a sheet of plastic wrap or parchment paper on top of it, flatten each ball down to a disk about 5-inches in diameter and 1/4-inch thick.

Place 1/4 of your chosen cheese (I used feta) into center of one disk, leaving a 1/2-inch gap all around.

Place a second disk on top and carefully seal the edges all around, trying to remove as much air from the center as possible.

Use one hand to shape the edges of the arepa so that it is an even round disk.

Melt butter in a 12-inch cast iron or non-stick skillet over medium-low heat (see note #3 above). Add arepas and cook, moving them around the pan and rotating them occasionally, until first side is charred in spots and a dry crust has formed, which takes about five minutes.

Flip arepas and cook on second side until a dry crust has formed, about five minutes longer. Transfer to a baking sheet and place in oven until heated through and cheese is melted, about 10 minutes. Serve immediately.

Masarepa is dehydrated cooked corn meal. It is available in the Latin section of most supermarkets in either white or yellow varieties. I used white, but they can be freely substituted. Don’t make the mistake of buying corn meal – it just won’t make the right kind of dough. It has to be precooked maize meal, of which P.A.N and Goya are the main brands.

Crumbled cheese can be added to the dough if desired. Depending on the moisture level of the cheese, you may not need all the water.

For the cheese filling, Colombian-style queso fresco is ideal. If you can't find it, substitute cotija, ricotta salata, or feta, but the texture of the hot cheese will be different. I used feta, which doesn’t melt well, but still tastes great. 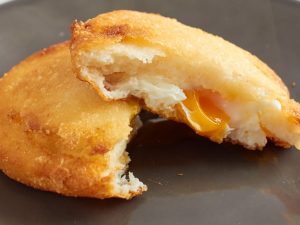 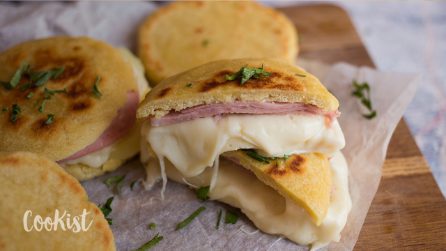 7.594 • by Food Inspiration
Ham and cheese stuffed arepas: a soft corn cakes you must try!
138 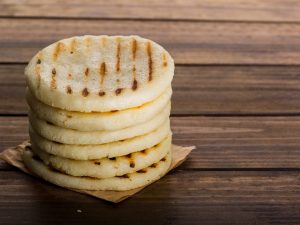 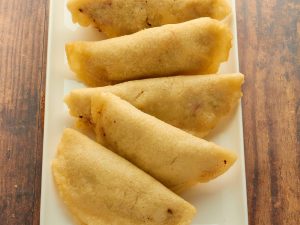 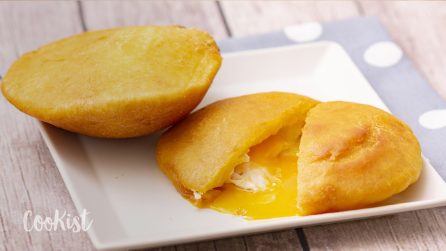 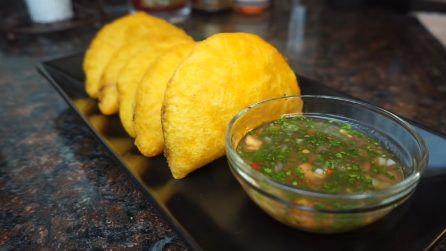