Sesame chicken: the easy savory-sweet dinner recipe both kids and adults will love

If you love tasty Chinese restaurant copycat dishes, you need to try this amazing sesame chicken recipe. The perfectly crispy pieces of chicken breast are coated in an incredible honey-soy sauce that gives this dish its outstanding flavor. It's a winning combination of sweet and savory that will appeal to just about everyone! Sesame chicken is a cinch to make – you can have it ready in about 30 to 40 minutes. The best part is that making sesame chicken at home is so much healthier than anything you'll get from a takeaway.

This is the difference between sesame chicken and General Tso's chicken

While sesame chicken and General Tso's are fairly similar, there are a couple of differences that make the two dishes unique. General Tso's chicken tends to be spicier and is often served over rice with steamed broccoli. Recipes for General Tso's also tend to skip out on sesame oil and sesame seeds, but you will come across variations that include both.

Orange chicken has a tangier flavor than sesame chicken, but both have a delicious sweet-savory taste which helps make them so universally popular. Sesame chicken is actually a little bit easier to make than orange chicken as well, making it a wonderful choice for a quick mid-week meal.

To make an authentic copycat recipe, it's best to coat the chicken and fry it. However, if you want to whip up a healthier take on this super popular Chinese recipe, you can saute the chicken instead of coating and frying it. It'll still taste great!

What to serve with sesame chicken

You can't go wrong if you serve up your sesame chicken with steamed rice. Noodles taste fantastic as well – we recommend using egg noodles, which are available at most supermarkets. Other excellent options to serve with your sesame chicken include quinoa and stir-fried veggies.

Crack the eggs into a small bowl and beat with salt and pepper. Mix the flour and cornstarch in a bowl.

Heat about 3-in of oil in a large, deep pan. Fry the chicken in batches of about 7-9 at a time (depending on the size of your pan) for about 5 to 6 minutes. The chicken should be golden brown and crispy. Set aside on a paper towel to drain excess oil. Repeat until all the chicken is cooked.

As the chicken is frying, mix the honey, soy sauce, ketchup, sugar, rice vinegar, sesame oil, and cornstarch in a bowl. Heat oil in a large pan and cook the garlic until fragrant, about 30 to 45 seconds. Pour in the honey-soy sauce mix. Stir, and allow it to come to a simmer. Cook until it begins to thicken, about 3 to 4 minutes.

Place the chicken in the pan with the sauce. Toss to coat. Garnish with spring onions and sesame seeds before serving. 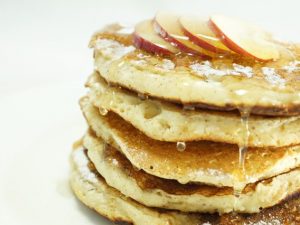 Easy 20min
Apple pancakes: the recipe for an American brunch
795 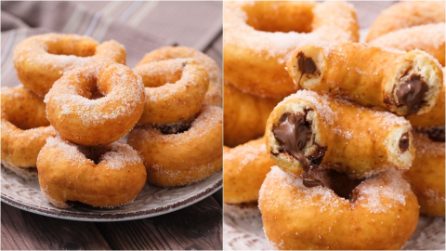 10.406 • by Food Inspiration
Chocolate filled donut recipe: both grown-ups and kids are gonna love this!
343 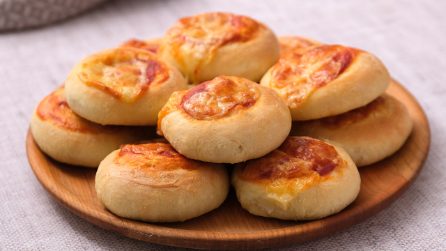 3.487 • by Food Inspiration
Fluffy mini pizzas: a bite sized version of pizza that makes for a fun and unique appetizer!
153 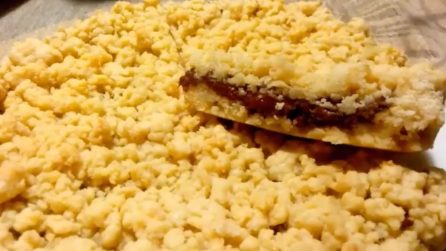 964 • by Love Kitchen
Chocolate crumble: the fragrant dessert that both grown-ups and kids will love
78 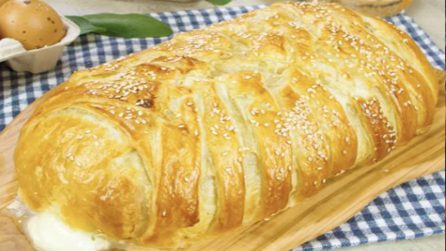 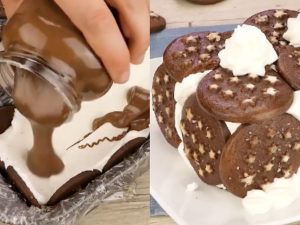