15 Things You Need to Know About Wasabi

If you’ve ever been to a sushi restaurant, you’ll most likely have been served with a pretty, light green condiment paste. This is wasabi root, and its beautiful green coloring hides the ferocious heat that lies within it!
Healthy food hacks
by Cookist

If you’ve ever been to a sushi restaurant, you’ll most likely have been served with a pretty, light green condiment paste. This is wasabi root, and its beautiful green coloring hides the ferocious heat that lies within it!

Wasabia japonica is the scientific name of this small, perennial plant, which belongs to the Cruciferous, or mustard plant family native to Japan. There are some surprising health benefits to be had from consuming this plant, including disease prevention and antibacterial properties.

Wasabi grows about two feet tall from the surface of the soil, and has broad, heart-shaped leaves. The perfect place to cultivate it in Japan is considered to be Utogui, in Shizuoka prefecture.

1. Wasabi root has been used since ancient times in Japan as an antibacterial, antifungal, and anti-inflammatory agent. The Japanese used it to kill harmful food borne bacteria, especially in sashimi (raw fish) dishes.

2. The pungent heat of the wasabi root comes from many volatile sulfur-containing organic compounds, but particularly allyl isothiocyanate. This compound has been found to have anti-mutagenic and anti-cancer properties.

3. As with horseradish, some of the volatile phytochemical properties of the root stimulate salivary, gastric and intestinal enzymes, which helps to aid digestion.

4. Wasabi is a great source of vitamin C. It contains 41.9 mg per 100 grams, which is nearly twice the amount that horseradish has. Vitamin C is a water-soluble antioxidant, which helps to protect against free radicals. It may also help protect the body from cancers, inflammation and infections.

5. It’s also a good source of essential minerals, such as potassium, manganese, iron, copper, calcium, and magnesium. The rhizome also contains average levels of vitamins such as folate, vitamin B6, riboflavin, niacin and pantothenic acid.

6. It’s unusual to find fresh wasabi stems outside of Japan, but if you are lucky enough to find some, make sure the rhizomes are fresh and firm, and preferably with the top leaves still on.

7. At home, store it in the refrigerator, where it will keep for around two to three weeks. Cut the greens from the root before you store it, and if you are going to use the leaves and stalks, do so while they are still fresh.

8. To prepare wasabi roots, scrub the rhizomes well in cold, running water to remove any dirt and soil. Trim any protruding knobs on the surface, but you don’t have to peel the whole thing.

9. The heat of wasabi may not be appreciated in the whole root – it takes crushing and mincing of the rhizome to release the volatile compound that provides the burn.

10. To truly appreciate the flavor, let freshly prepared wasabi paste sit for five minutes after preparing. This gives time for the flavors and heat to fully develop. Traditionally, wasabi root was grated in a circular motion on a sharkskin grater, to provide a fine paste.

11. Don’t keep the freshly made paste hanging about too long, or it will start to lose its flavor, like with many other spices.

12. In Japan, the root is not just used for sashimi dishes, but is also used as an accompaniment to chicken, meat and seafood. It’s also used in sauces and dressings.

13. All parts of the wasabi plant are edible, including the leaves and flowers, but it is the root that is especially prized.

14. Fresh wasabi leaves and stalks can be pickled, and you can prepare wasabi vinaigrette to serve over salads. Another tasty idea is to add some wasabi paste to mayonnaise and lemon juice to use as a dip for asparagus, French beans, snap peas, and grilled meats.

15. Some people can have an allergic reaction to wasabi, although it is quite rare. Always take care and wear protective gloves and a mask if you are grating, chopping or crushing the root, as the gases released can irritate your skin, eyes, nose and mouth. Keep some vinegar or lemon juice on hand to stop this reaction and stabilize the flavor. 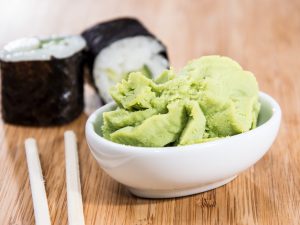 Wasabi: what it is, how to make it and how to use Japanese green sauce
127 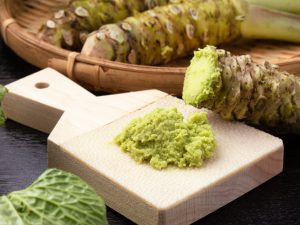 The Nitty-gritty Of Why Wasabi Is Always So Hot – According To Science!
181 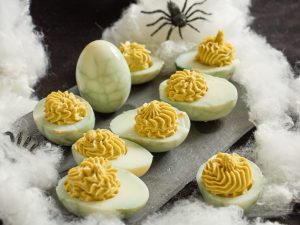 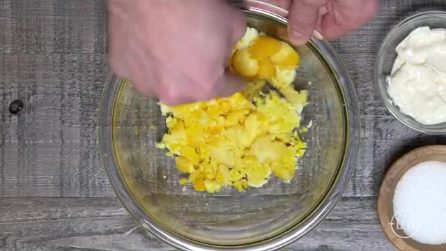 5.161 • by Love Kitchen
Separate egg yolk from white of the hard-boiled egg: make a real treat
97 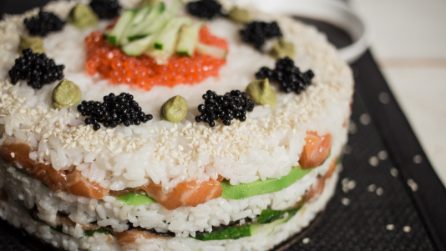 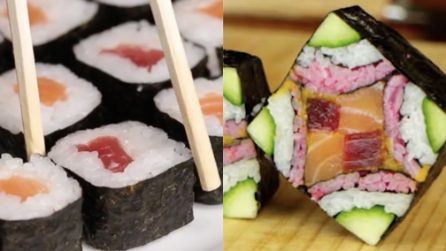