All about the Croque Monsieur Sandwich

This very simple French preparation is served at many cafés and eateries of the whole of France.

Sandwiches hold a special place in our hearts as it is a decadent treat that is quick to prepare and quite versatile in nature. From grilled to cold, to open, there are many versions of sandwiches that can fill our appetite. Read on to know about the famous Croque Monsieur sandwich, which is symbolic of Paris, of course, besides the Eiffel tower.

Paris is the city of roadside cafés where people can relish decadent French flavors. In this fast-paced life where people do not get enough time to enjoy even a decent meal, sandwiches come in handy. Croque Monsieur Sandwich is one such sandwich that is quite popular in the French capital, both for its taste and the history associated with it. It is essentially a toasted ham and cheese sandwich. This very simple French preparation is served at many cafés and eateries of the whole of France.

Going back to its history, it is believed that this sandwich was created accidentally when the French workers left their lunch too close to a radiator, which toasted the bread and melted the cheese in their sandwiches.

Another version of its origin states that it was created in the year 1901 by a chef who ran out of baguettes and instead used slices of pain de mie, placed cheese and ham between them, and then baked it until crisp.

Digging deep into the history, it was found that this sandwich first appeared on the Parisian café menu in the year 1910.

The main ingredients of this sandwich are:

A huge bunch of thinly sliced ham is placed between two slices of bread along with the cheese of your choice.

Any of these cheese, along with thinly sliced ham, is placed between two bread slices, and then the sandwich is first buttered and then grilled until crisp.

It is typically topped over the sandwich, and then the sandwich is placed under the broiler for a few minutes until golden brown on top.

Some Croque Monsieur sandwiches are topped with a lightly fried or poached egg. This version of the sandwich is referred to as Croque Madame, and it dates back to the year 1960. 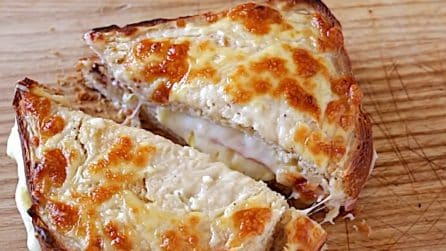 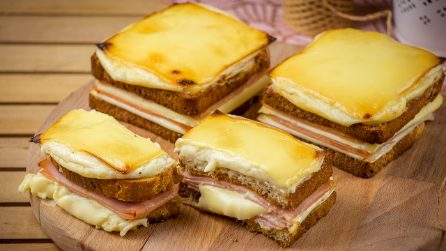 Croque monsieur: one of the most delicious toast ever!
Views
8.102 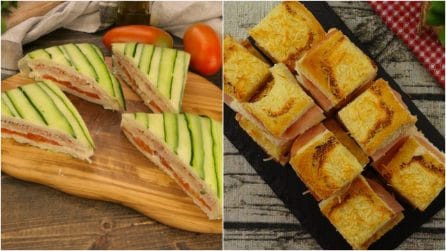 How to use sandwich bread for amazing appetizer!
Views
4.213