Bagel Breakfast Sliders has a Jewish origin and can make any breakfast or dinner special. The combination of processes during its preparation give it a soft core and a crunchy cover. When it is combined with good cheeses, the always tasty bacon, the right seasoning and a special omelet, a different breakfast can be obtained for a significant day: birthday, anniversary or any other. You will only need a little time to give your family with this delicious dish and begins the special day with a smile after eating delight. Animate to prepare this meal to surprise them.

Prepare a baking tray with cooking spray. Place the cream cheese out of the refrigerator to have it at room temperature. Now preheat the oven to 180°C/350 °F. Open the eggs and pour one by one in a bowl. Pour the milk in the bowl and proceed to beat up using a beater.

Preserve this mixture. Place a large frying pan on medium heat and add the bacon. When bacon is crunchy retire from heat, extract the bacon from the frying pan and place over absorbent paper to remove some fat.

Cut up the bacon finely. Keep up about 1 tablespoon of the bacon fat in the frying pan. Turn heat to medium-low  and proceed to pour the egg and milk mixture into the frying pan. Stir occasionally with a wooden spoon, to prevent adhesion.

Season with salt and pepper. Add the finely chopped chives. Retire the frying pan from heat. Proceed to cut the bagels in halves.

Cover completely one half of each bagel with the cream cheese and put them in the baking tray. Preserve the other halves.

Add the fried egg-milk mixture on the bagel halves. Spread the bacon over the eggs. Sprinkle the grated cheddar cheese over the eggs. Finally cover each bagel with the halves previously preserved.

Take a small bowl and add the butter. Introduce the bowl in the microwave oven, and cook for 20 seconds, in order to melt the butter. If after this time the butter is not completely melted repeat for other 20 seconds.

When the butter is melted proceed to varnish each bagel with it. Sprinkle now the dried onion, granulated garlic, sesame and poppy seeds over the bagels. Introduce the baking tray in the oven and bake until the bagels are toasted and the cheese is melted (about 10 minutes).

Retire from the oven and proceed to serve hot. 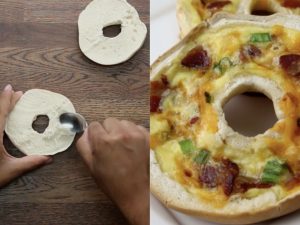 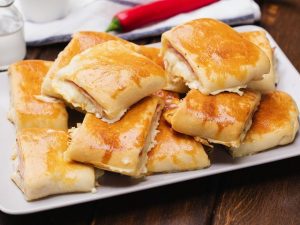 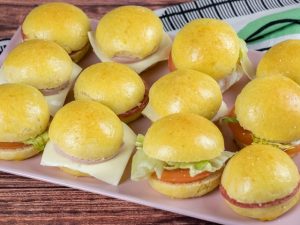 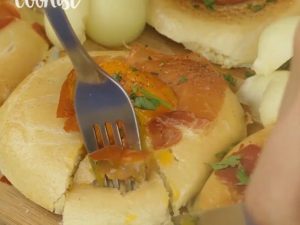 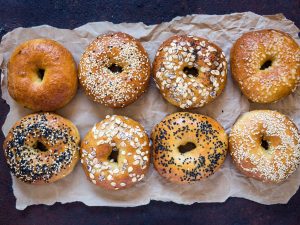 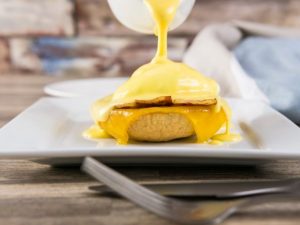