Fall is the time of apple desserts. If you haven’t tried apple cheesecake yet, you’ll fall in love with this Caramel Apple Cheesecake. It combines the sweet flavors of a caramel apple pie with the creaminess of a cheesecake—delicious! It’s not difficult to make either. Mascarpone and yogurt create a delicate cheesecake filling, while fresh apples are cooked and used as a topping.

It’s full of cinnamon, apples, homemade caramel sauce and is absolutely delicious! If you’re looking for an exciting new dessert to try this fall, this Caramel Apple Cheesecake won’t disappoint!

How to make Caramel Apple Cheesecake

The Caramel Apple Cheesecake has three components: the crust, the filling, and the topping. The crust comes together quickly. First, crush the biscuits using a rolling pin and mix with the melted butter. This crust is then pressed into the baking tin and set aside while you prepare the filling (you can place it in the fridge to allow it to become firmer).

The filling is then prepared with mascarpone, yogurt, and flour. Because it doesn’t contain heavy cream, it’s not as heavy as many other cheesecakes. The mascarpone also adds a bit of sweetness. The filling is then baked for almost an hour while you prepare the topping.

To make the topping, fresh apple slices are cooked with lemon juice, sugar, and cinnamon until it softens. The slices are carefully placed on the baked cheesecake and then drizzled with caramel sauce. A final sprinkle of almonds rounds of the cheesecake and it’s ready to serve!

If you love cinnamon, use cinnamon-flavored graham crackers for the biscuits base. Alternatively, use gingersnaps.

To make your own caramel sauce, cook caramels (a packet of 14oz) with 2/3 cup evaporated milk until the mixture starts to thicken and darken in color. You can also make a caramel sauce from scratch by cooking 1 cup brown sugar, ¼ cup butter, ¼ cup milk, and 1 teaspoon vanilla extract until it thickens (about 2-3 minutes).

To prevent the cheesecake from over-browning or cracking, use a water bath while it bakes in the oven.

To prevent the crust from not firming up (or breaking apart), make sure that you thoroughly coat the biscuit crumbs with the butter. Mix it until there are no more loose crumbs visible.

For a no-bake filling, whisk together two 8-oz packages of cream cheese, one 14-oz can of condensed milk, ½ cup fresh lemon juice, and 1 teaspoon vanilla extract until smooth. Refrigerate for 3-4 hours until firm.

How to store Caramel Apple Cheesecake

Store any leftovers in the fridge for up to 3 days. Just make sure to place it in an airtight container.

Crush the biscuits into a mixing bowl, and mix them with melted butter.

Press the crumbs into the baking pan.

Add the eggs and flour and whisk again.

In the meanwhile, prepare the apples. In a pan fry sliced apples with lemon juice, sugar, and cinnamon. Cook until the apples begin to soften and caramelize.

Transfer apples onto the prepared cheesecake.

Pour with caramel and sprinkle with almonds.

This Caramel Apple Cheesecake will work best when baked in a springform cake pan! 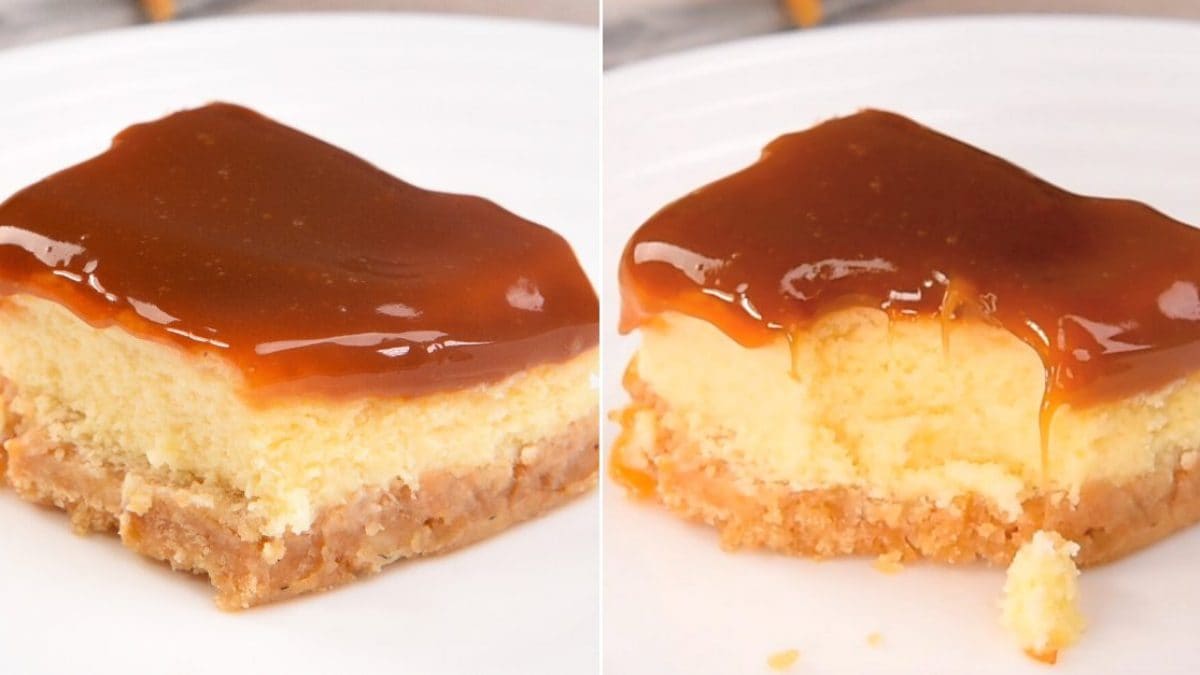 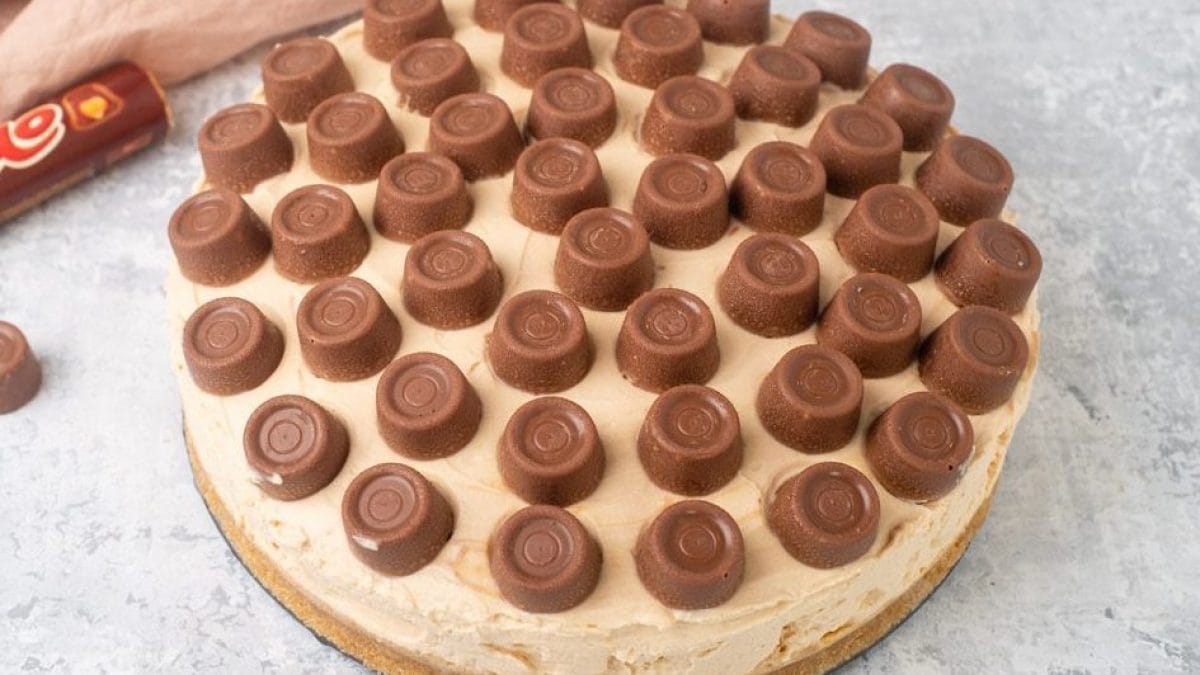 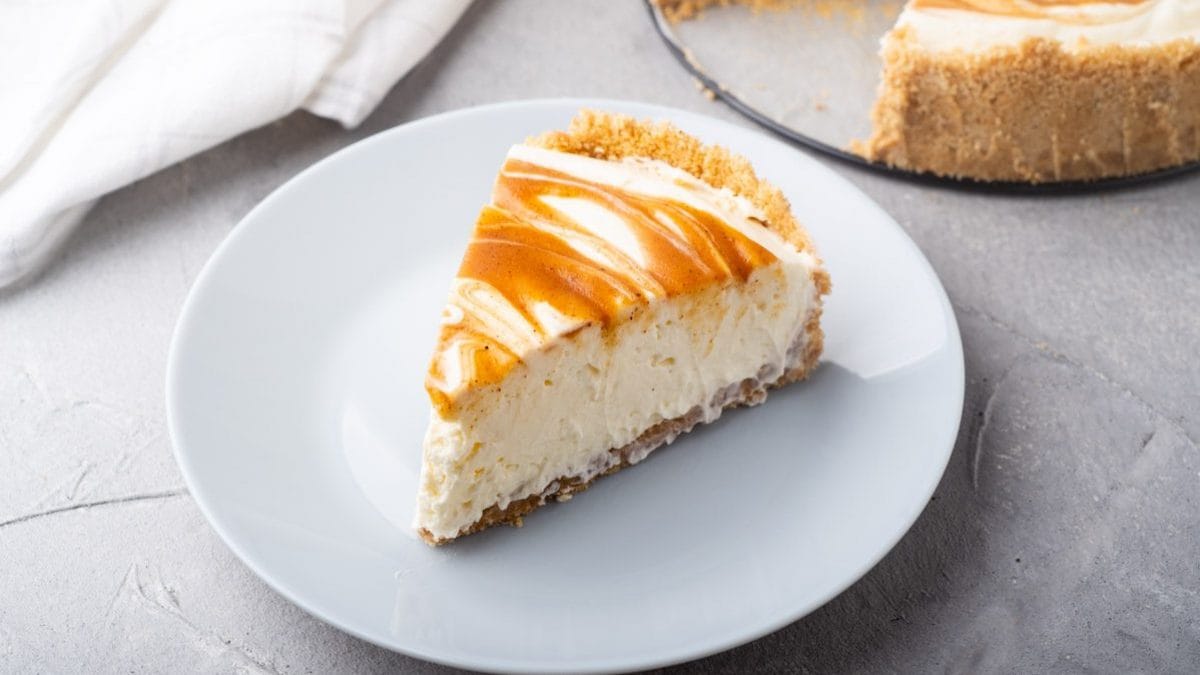