French macarons have come a long way. Some believed that they were actually invented in Italy as far back as the 8 th century, and some 16 th century Italian cookbooks actually mention a type of almond biscuit that sounds very much like a macaron. It’s safe to say however, that French macarons as we know them today, were indeed invented in France. The ‘Macaron Parisien’, a meringue sandwich cookie, was introduced to the public in the 19 th century. It was soon popularized by the sweet maker, Ladurée, and after that, experimentation has led to many new flavors and fillings.

How to make French Macarons – Step by Step

French macarons, which consist of almond cookies with a flavorful filling, should not be confused with macaroons, which a chewy coconut cookie. There are two different types of macarons, namely French and Italian, which differ in the way the meringue is made. With French macarons, the egg whites are whipped to stiff peaks, and only then are the almond flour (or ground almonds) and sugar folded in. With Italian macarons, the egg whites are whipped together with a hot sugar syrup. Ground almonds and more powdered sugar are then added to the meringues. Making Italian macarons are more difficult (you need a candy thermometer to check the sugar syrup), and the end result is also sweeter. Luckily, we have a great basic French macaron recipe you can try today!

Preheat your oven to 180°C/350°F. Cover a baking sheet with parchment paper. Sift almond flour with powdered sugar, add a pinch of salt, and whisk to combine.

Beat egg whites until fluffy. At this stage, start adding sugar gradually, while beating with a hand mixer. Beat until stiff peaks form.

Fold the dry ingredients into the egg whites.

Divide the mixture in three parts: add cocoa powder, pink and green food coloring into each separate bowl, and carefully stir to combine.

Fill three separate pastry bags with the different colors of fillings. Start squeezing the macaron filling out of the bag making small rounds on the parchment.

Leave macarons uncovered for 30 minutes. You’ll know they’re ready when a dry crust has formed on top of each one.

Bake for 10 minutes and cool down for another 10 minutes before removing them from the parchment. Using the caramel as a filling, create sandwiches with two macaron halves.

The key to French macaron success is careful measuring. Make sure that all the ingredients are weighed out precisely.

The biggest culprit for French macaron fails, is actually one that is beyond your control – humidity. French macarons are extremely sensitive to moisture, and if the air is too humid, the surface of your macarons won’t form a crust. This means they will turn out chewy, instead of forming a hard shell. There are a few ways you can try to combat moisture in your macarons. If you live in a humid area, switch on the air conditioner while you make macarons, as this will keep the air dry. Another option (and one that is quite unexpected too), is to use old eggs. Ageing egg whites have less moisture in them, which will make for a dryer macaron. Finally, you could also use powdered food coloring instead of the normal liquid, as this will also have a favorable effect.

To get a perfectly round macaron shape, use a template. You can either buy a silicone mat with templates, or print or draw your own on parchment paper.

Make sure that all your bowls and utensils are squeaky clean. If there is any trace of oil, dirt, or grease, it will be difficult to beat your eggs to a stiff peak.

There are many other fillings you can use, you don’t necessarily have to stick with caramel. Try fruit fillings (like strawberry jam), curds (like lemon curd), chocolate ganache, and even buttercream.

How to store and Freeze French Macarons

Filled macarons can be stored in the refrigerator for up to 2 days, depending on the filling!

It’s important to let the macarons ‘mature’ for up to 24 hours before freezing. This will ensure that they don’t release too much moisture when thawed.

Macaron shells can be frozen in an airtight container for up to 3 months.

Filled macarons can be frozen in an airtight container for up to 1 month, but it also depends on your filling.

Let the macarons thaw in the refrigerator for one hour, but bring them to room temperature before serving. 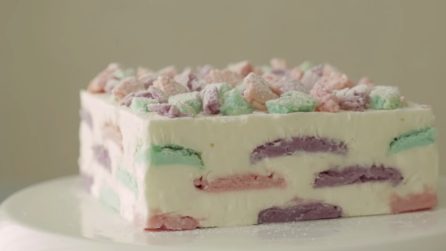 352 • by Love Kitchen
Macaron cake: beautiful, colored and so yummy
87 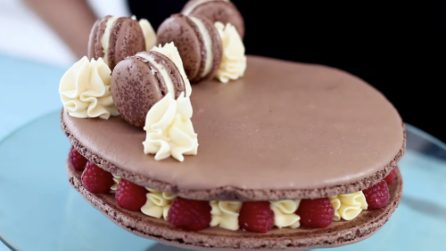 482 • by Love Kitchen
How to prepare a giant macaron cake: the easy recipe
238 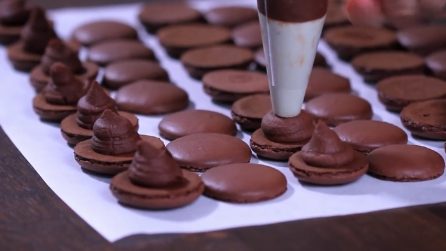 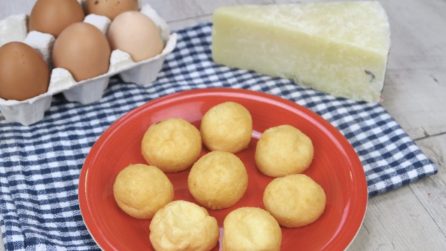 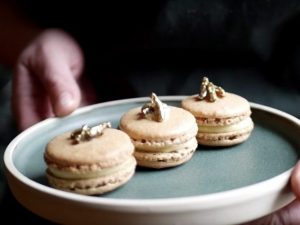 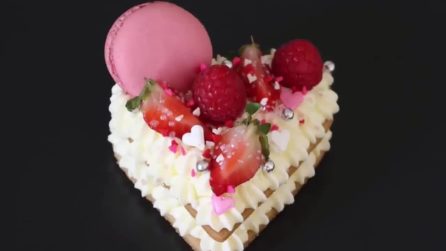