Potato latkes are a classic Jewish recipe that is usually served during Hanukkah. Latkes are crispy and golden brown on the outside, tender and chewy on the inside, and totally delicious. Compared to the potato pancakes, latkes are a little flatter, a little thicker, and aren't as uniform-looking due to the fact they're made from shredded potatoes.

Latkes are super easy to make – all you need are potatoes, egg, flour, and a dash of salt. Serve your potato latkes with sour cream and freshly chopped chives, apple sauce, or your favorite dips and toppings, or with a salad and a side of roasted veggies to make a full meal.

What Are the Best Potatoes for Latkes?

Any type of baking potato is good for making latkes. Russet potatoes are the gold standard. They're starchier than other types of potato, which means they're less likely to fall apart when you're frying them.

There are a few different ways you can make potato latkes. The basic ingredients you need are starchy potatoes like Russets, egg, flour, and salt to season.

The egg and flour act as binding agents to keep the latkes from falling apart when you're frying them. You can use matzo meal instead of flour for a crispier latke.

Finally, you'll need some vegetable oil to fry the latkes.

How to Make Classic Latkes Step-by-Step

Next up, heat 1/8-inch of oil in a large skillet. When the oil is shimmering hot, pop a couple of spoonfuls of the potato mixture into the skillet. Press them down to flatten them into patties, then fry them for 3 minutes on each side, or until crispy and golden brown. Place the latkes onto a paper towel to drain off the oil, then season with salt and serve warm.

What to Serve with Latkes

Potato latkes are usually served with sour cream and a sprinkling of fresh chopped chives or applesauce. They're also fantastic with cream cheese and smoked salmon, hummus, sauerkraut, relish, or pureed veggies.

Tips for the Best Classic Latkes

Make sure to squeeze out as much excess water from the potatoes as possible. You can also let the potatoes drain in the fridge overnight.

Traditionally, latkes are fried in chicken schmaltz, or rendered chicken fat. This gives them a better flavor and makes them crispier. You can make schmaltz at home or purchase it from a Jewish deli.

To make vegan latkes, use onion and matzo meal to help bind the latkes so they don't fall apart when frying.

For low-carb latkes, use almond flour or coconut flour in place of all-purpose flour.

For sweet latkes, use sweet potatoes instead of regular potatoes.

You don't have to peel the potatoes – it's up to you!

How to Store Potato Latkes

Once they've cooled to room temperature, transfer your potato latkes to an airtight container and place them in the fridge for up to 2 days.

Frozen latkes will last for 2 weeks. To reheat them, bake them at 350F until crispy. 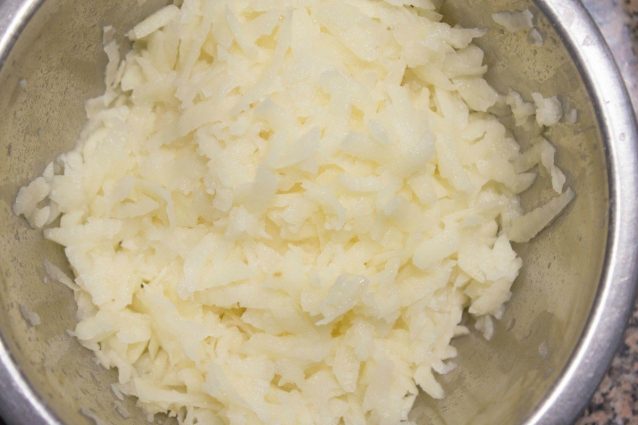 Grate the potatoes. As you're working, place the grated potatoes into a bowl filled with ice. Once all the potatoes have been grated, transfer them to a clean towel and squeeze out the water. Mix the potatoes, eggs, flour, and 1 teaspoon of salt in a large bowl.

Grate the potatoes. As you're working, place the grated potatoes into a bowl filled with ice. Once all the potatoes have been grated, transfer them to a clean towel and squeeze out the water. Mix the potatoes, eggs, flour, and 1 teaspoon of salt in a large bowl.

Heat 1/8-inch of oil in a large skillet. When the oil is hot, place a few spoonfuls of the potato mixture into the skillet. Press them to flatten, then fry 3 minutes on each side, or until crisped and golden brown. 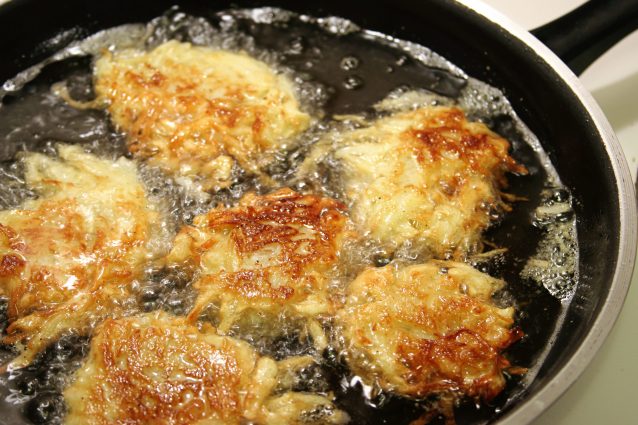 Place on a paper towel to drain excess oil, and season with salt. Serve and enjoy!

Use a neutral-tasting oil with a high smoke point to fry your latkes. Canola oil, sunflower oil, grapeseed oil, and vegetable oil are all safe bets. 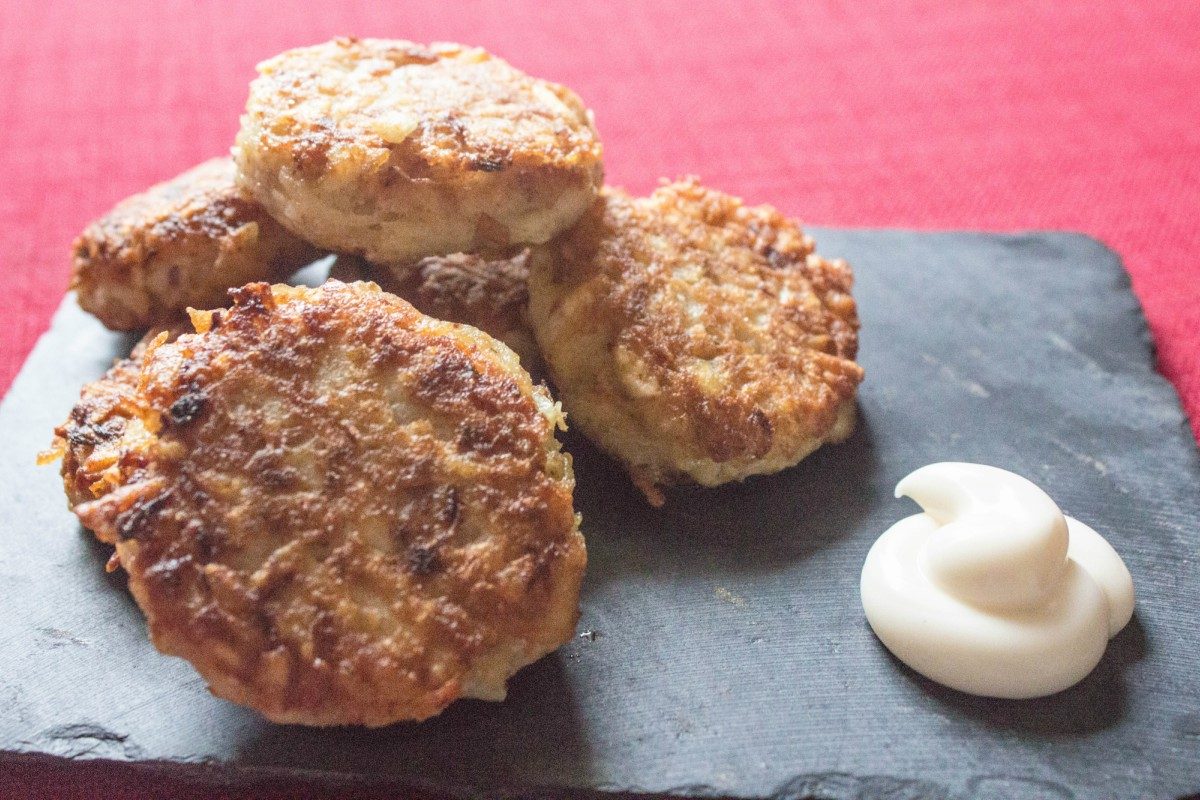 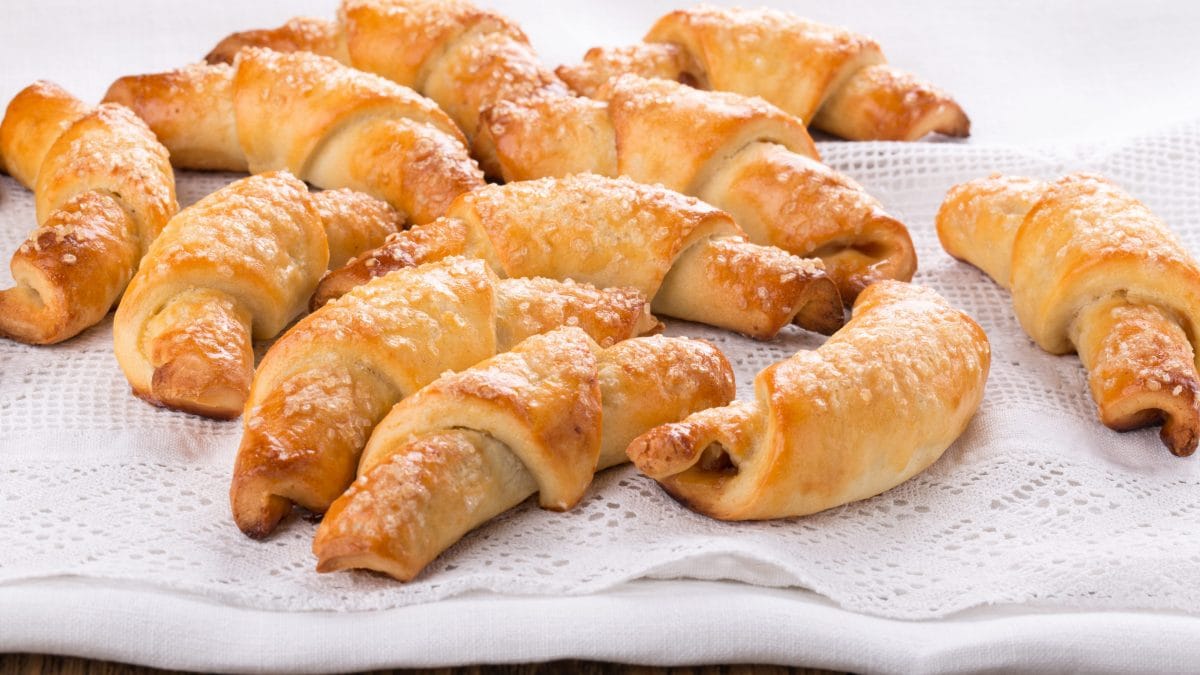 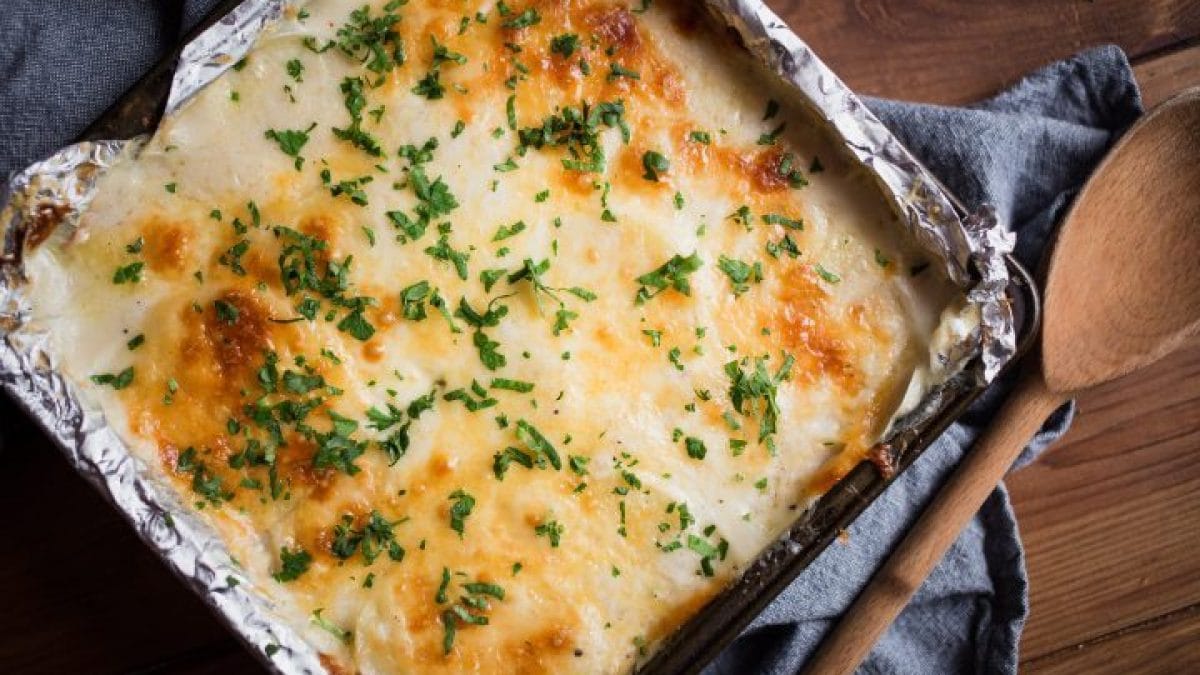 Side dishes Scalloped Potatoes: the easy recipe for a classic, layered side dish
Views
31.397