Cloud Bread: the easy recipe for fluffy and light bread

Cloud Bread is quick and easy and was made famous because of a viral #cloudbread Tiktok video. The bread gets its name from its cloud-like texture… it’s fluffy, light, and feels like fluffy clouds on your tongue. You’d think that an intriguing recipe like this requires many ingredients, but it doesn’t! Egg whites, a little bit of sugar, and cornstarch are all you need to make this famous bread recipe. Egg whites are whipped until stiff peaks, and it’s this step that’s responsible for the fluffiness of the bread. Because it doesn’t contain wheat flour it quickly became known as suitable for weight loss, keto, and gluten-free diets.

What is Cloud Bread?

Cloud bread is a baked puffy bread made with whipped egg whites (meringue). This creates a souffle-like bread (or cloud-like) texture that becomes more like bread, the longer it rests. There are many different variations (all of which include whipped egg whites), and you can make it either sweet or savory. You can make this gluten-free, and keto-friendly. It’s high protein and low carb, too!

Egg whites – For any cloud bread, you must have egg whites. The egg whites are what creates the souffle-like texture that you’re after. To make sure that they’re whipped properly, there must be no traces of yolk in the egg whites. Egg whites also whip better when at room temperature.

Sugar – For this recipe, we used sugar to make a sweeter dessert version of the traditional cloud bread. Regular granulated sugar is fine to use. The sugar stabilizes the egg whites so that they whip even better.

Cornstarch – any moisture in your egg whites will prevent them from forming stiff peaks, so the corn starch absorbs excess moisture, ensuring perfect whipped consistency.

Cocoa – for the chocolate variety (see below), we added cocoa. This creates an additional chocolate layer for your cloud bread.

How to Make Cloud Bread

Making this famous cloud bread recipe is easier than you may think. First, whip the egg whites until stiff peaks form. Make sure that you use a squeaky-clean bowl, to ensure that the egg whites are whipped properly. The sugar is added, and the mixture is whisked again. Cornstarch is added. You can sift it in if you like, as this will prevent lumps from forming. Continue to whip the mixture until it’s thick and glossy. The mixture is shaped into a loaf of bread on a baking sheet (remember to line with parchment paper!) and baked.

Because the Cloud Bread contains so much meringue, the texture is much like that of a marshmallow. It has a very light texture, and it might taste slightly eggy! This sweet version, however, hides the eggy taste slightly.

Tips for the Best Cloud Bread

– If you want to make rainbow color breads, you can color them with food colorings of your choice.

– When beating the egg whites, make sure that all your utensils and bowls are clean and free of any food debris or moisture.

– While beating egg whites is important, it’s also important that you don’t overbeat them! Otherwise, the meringue will start to break, and your Cloud Breads won’t be as fluffy.

– Cloud bread can be toasted, but be very careful as it burns very quickly!

Can I store Cloud Bread?

Unfortunately, Cloud Bread cannot be stored. The meringue is not very stable, so the bread will fall flat and shrink pretty quickly. They’re best enjoyed fresh from the oven.

To make the plain cloud bread, add the egg whites to a large mixing bowl.

Add the sugar and beat until stiff peaks form.

Add the whipped mixture to a baking sheet with parchment paper and form a ‘bread’. Bake for 25 minutes at 180°C/350°F.

To make the cocoa cloud bread, add the egg whites to a large mixing bowl.

Add the sugar and beat until stiff peaks form.

Divide the dough. Add cocoa to one part and mix.

On a baking sheet with parchment paper, alternately lay out the dough to form a bread.

Turn this recipe into a keto version, by whipping 4 egg whites with ½ tsp cream of tartar, 2 ounces low-fat cream cheese, and seasoning. 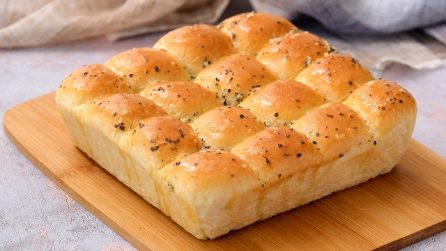 4.690 • by Food Inspiration
Easy garlic buns: light and fluffy as a cloud but rich and fragrant as garlic!
47 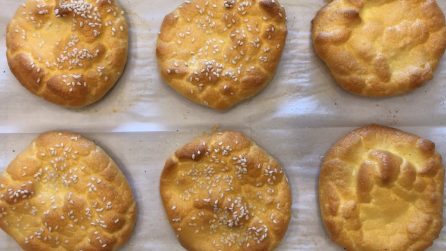 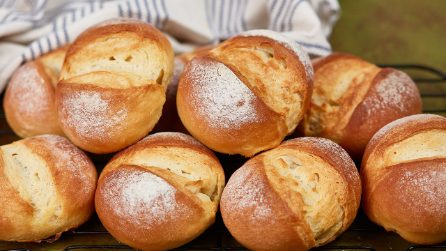 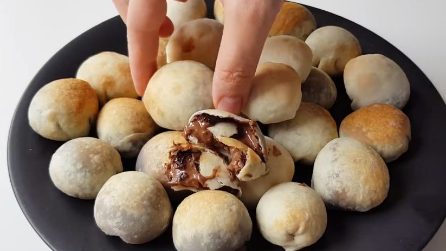 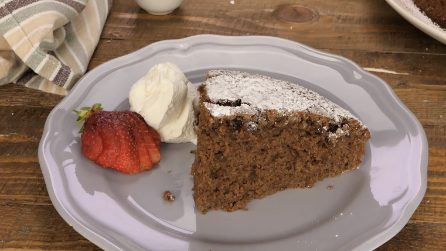 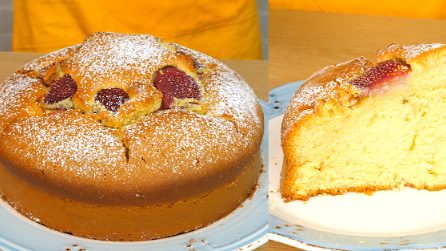