French Toast: the best-ever recipe for the popular breakfast dish

There's nothing like whipping up a batch of classic French toast on a lazy weekend morning. It has a rich, custardy, fluffy inside while the outside is buttery, crispy, and browned outside. Each bite is absolute perfection.

French toast is super to easy to make, you just need thick bread slices, eggs, milk, butter and cinnamon. There are loads of fabulous French toast variations to try. Serve yours with berries, maple syrup, powdered sugar, or jam, and enjoy it as part of a hearty, delicious breakfast or brunch.

What is Classic French Toast?

French toast is a much-loved breakfast and brunch dish which is also known as eggy bread, pain perdu, or pain doré. It's a clever way to use old, stale bread and turn it into a hearty, delicious meal.

Early versions of French toast date back to the 1st century AD. In fact, Romans used to dip bread slices in a milk mixture and fry them to make the so-called "pan dulcis".

What is the Best Bread for French Toast?

Old bread is ideal for making French toast. In fact, the staler it is, the better! Use several days-old French or Italian bread, and make sure to cut it nice and thick so the bread can hold the egg mixture without turning into a soggy mess. Brioche and challah bread as perfect as well.

French toast only calls for a couple of ingredients, and you probably already have them all in your kitchen.

First off, you'll need some stale French or Italian bread. Make sure it's a few days old.

To make the batter, you need eggs, milk, and cinnamon. Don't skip milk as it gives moisture and fat to the bread.

Finally, butter is used for frying the French toast, although you can also swap it for oil if you prefer.

How to Make French Toast

Whipping up a delicious batch of homemade French toast is so easy, even cooking newbies can do it with ease. Grab your ingredients, set up your tools, and let's get cooking.

To make the French toast batter, beat the eggs, milk, and cinnamon (plus any additions you might want to add) together so they're well combined. Put the egg mixture into a shallow bowl.

Soaking Bread in the Batter

Next, grab your thick-cut slices of stale bread and pop them in the egg mix. Let the egg soak through the bread, and be sure to hit both sides with the egg mix.

Melt the butter in a large pan or griddle over medium-high heat. Once the pan is nice and hot, fry the battered bread until it's golden brown, then flip it and cook the other side until browned. Once the French toast is cooked, pop it on a plate and add your favorite toppings.

Once you arrange the French toast on your plate, it's time to add garnishes. Simply sprinkle, dust, or smear your preferred toppings on top of your French toast, then grab a fork and knife and dig in!

You can add just about anything to your french toast. Popular toppings include fresh berries or fruit, powdered sugar, maple syrup, nut butter, fruit preserves, Nutella, chocolate syrup, and chocolate chips. Get creative!

How to Keep French Toast Warm

One last tip – don't stack the French toast on top of each other. This will make them lose their crisp exterior and become soggy.

Tips for the Best French Toast

To make dairy-free French toast, use oil instead of butter and plant-based milk instead of whole milk.

To make eggless French toast, simply leave out the eggs. You can add a little cornstarch to the milk if desired.

You can prep the egg mixture and the bread up to one day in advance.

Make sure you cut your bread nice and thick so it is robust enough to soak up the egg mixture.

For a richer French toast, substitute heavy cream for the milk.

What to Serve with Classic French Toast

French toast is usually enjoyed as a main meal at breakfast or brunch – although it tastes great any time of day. Serve it with your favorite toppings like maple syrup, fresh fruit, or powdered sugar, and enjoy it with a side of bacon, a small side of scrambled eggs, a light fruit salad, or some oatmeal.

How to Store French Toast

Let the French toast cool slightly, then wrap it with foil and put it in an airtight container in the fridge for up to 3 days. Reheat it in the oven at 350F or in a skillet until heated through.

Can You Freeze French Toast?

Absolutely! Place the foil-wrapped French toast in a sealable bag and freeze it for one to 2 months. 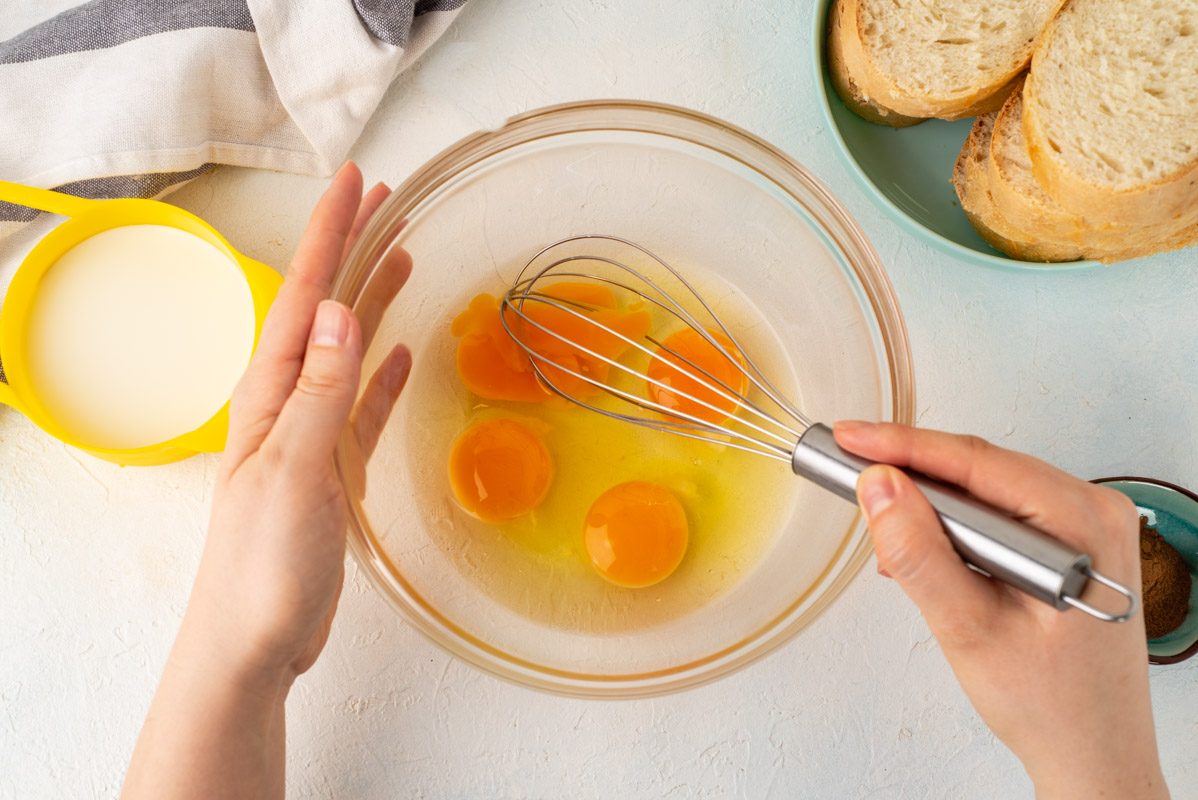 Pour in the milk. 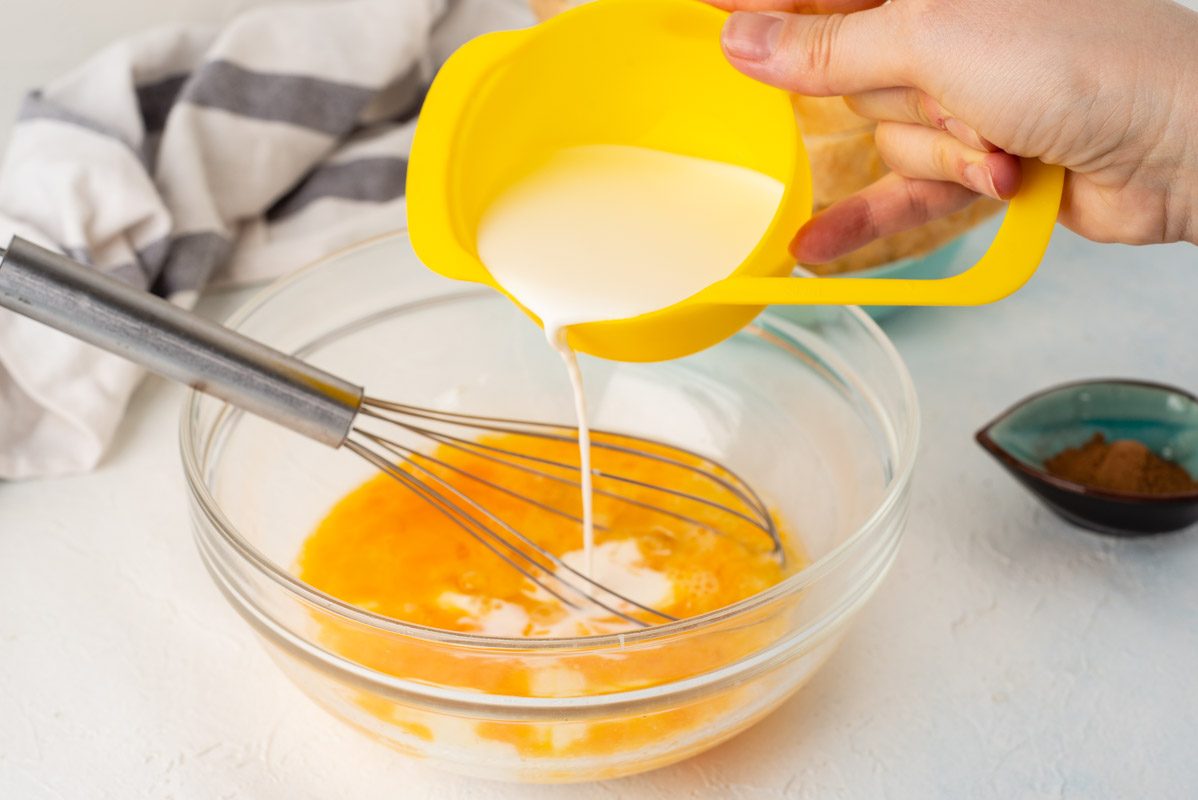 Add in the cinnamon.

Pour in the milk.

Put the bread into the egg mixture, one at a time. 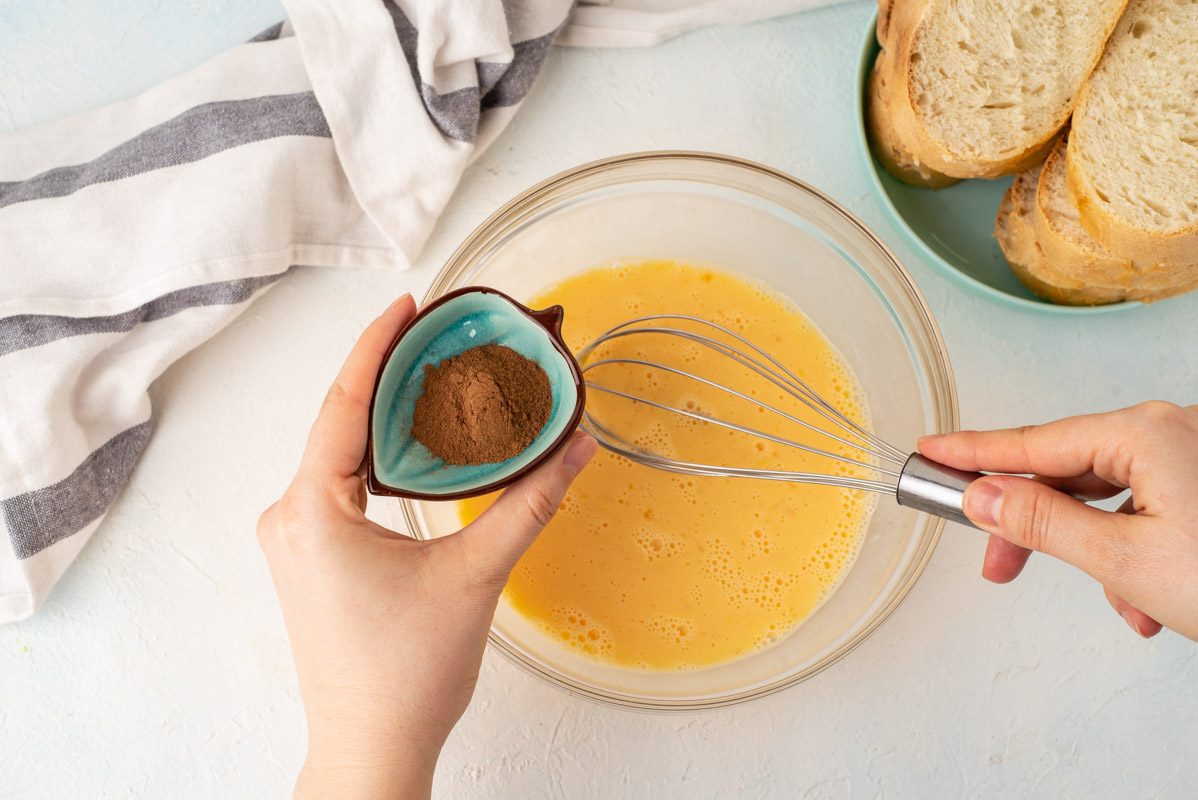 Flip the bread slice to coat both sides.

Add in the cinnamon.

Melt the butter in a large pan over medium-high heat. 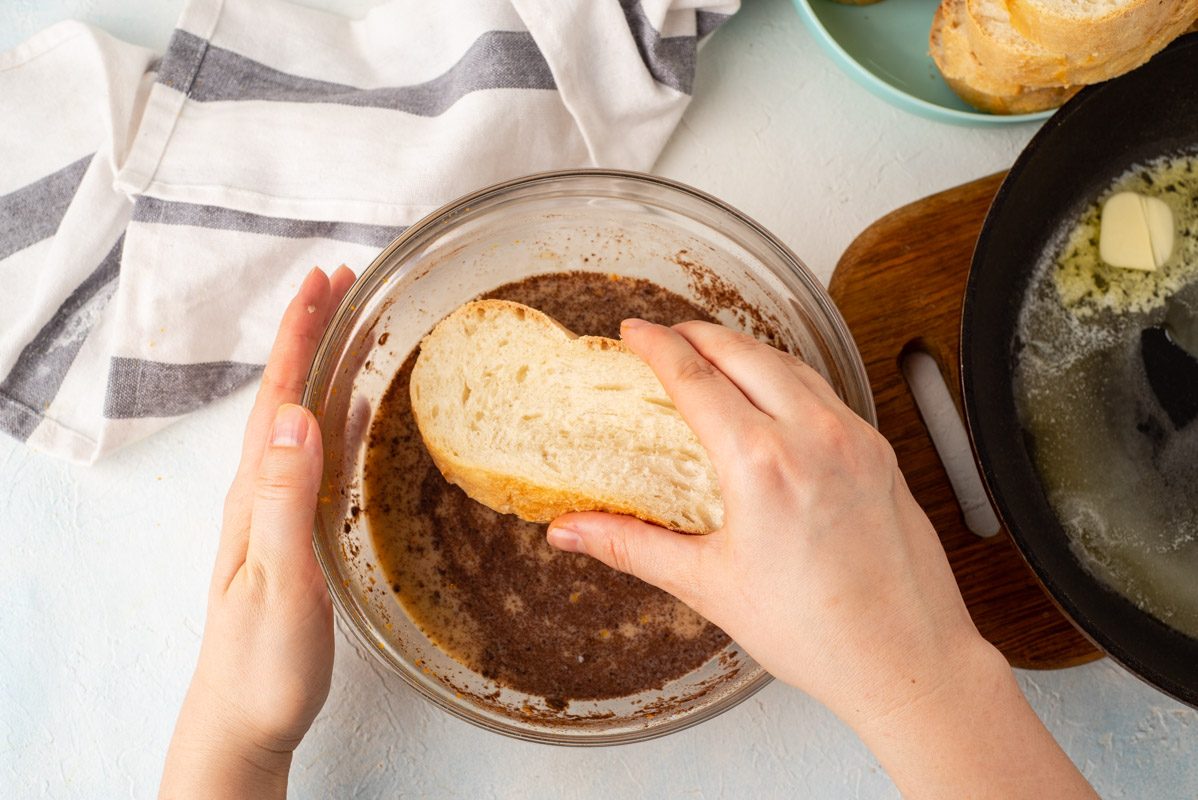 Once hot, fry the French toast for a few minutes, until browned.

Put the bread into the egg mixture, one at a time.

Flip it over and cook the second side until it browns. 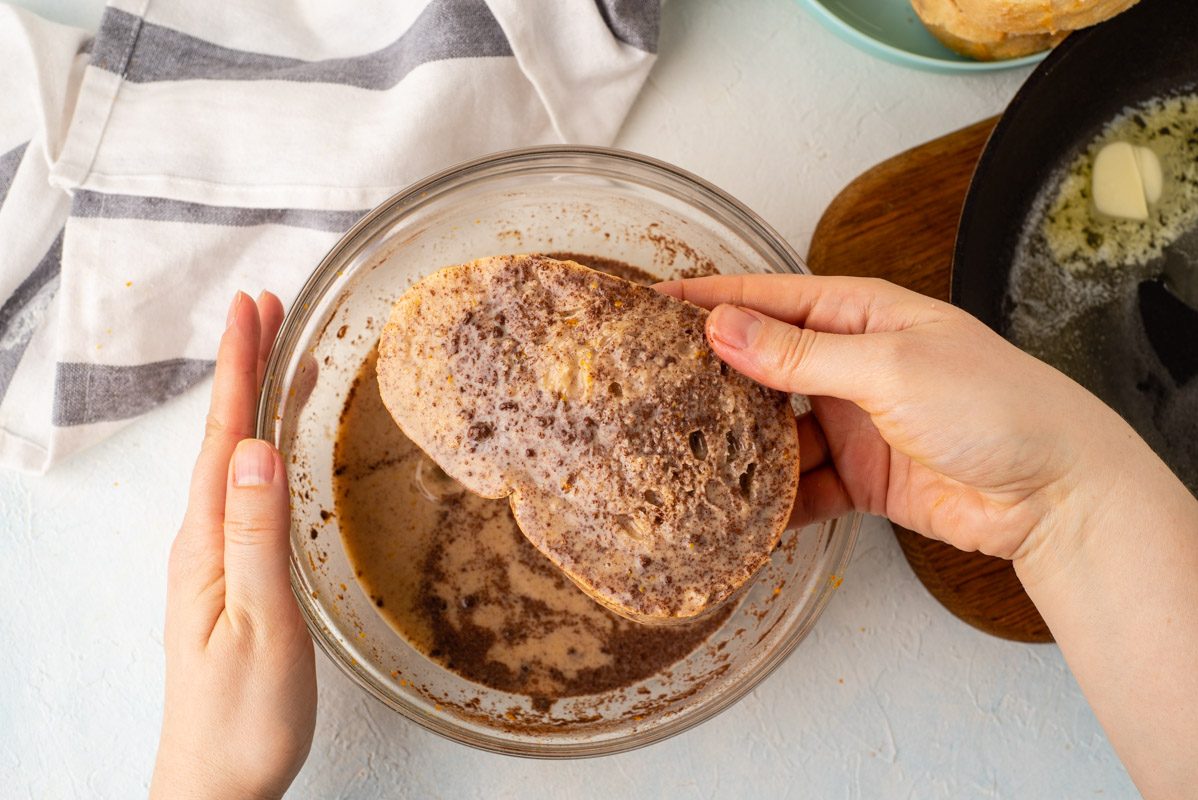 Transfer the bread slices to a dish.

Flip the bread slice to coat both sides.

Use salted butter for making your French toast. It'll give it a better flavor. 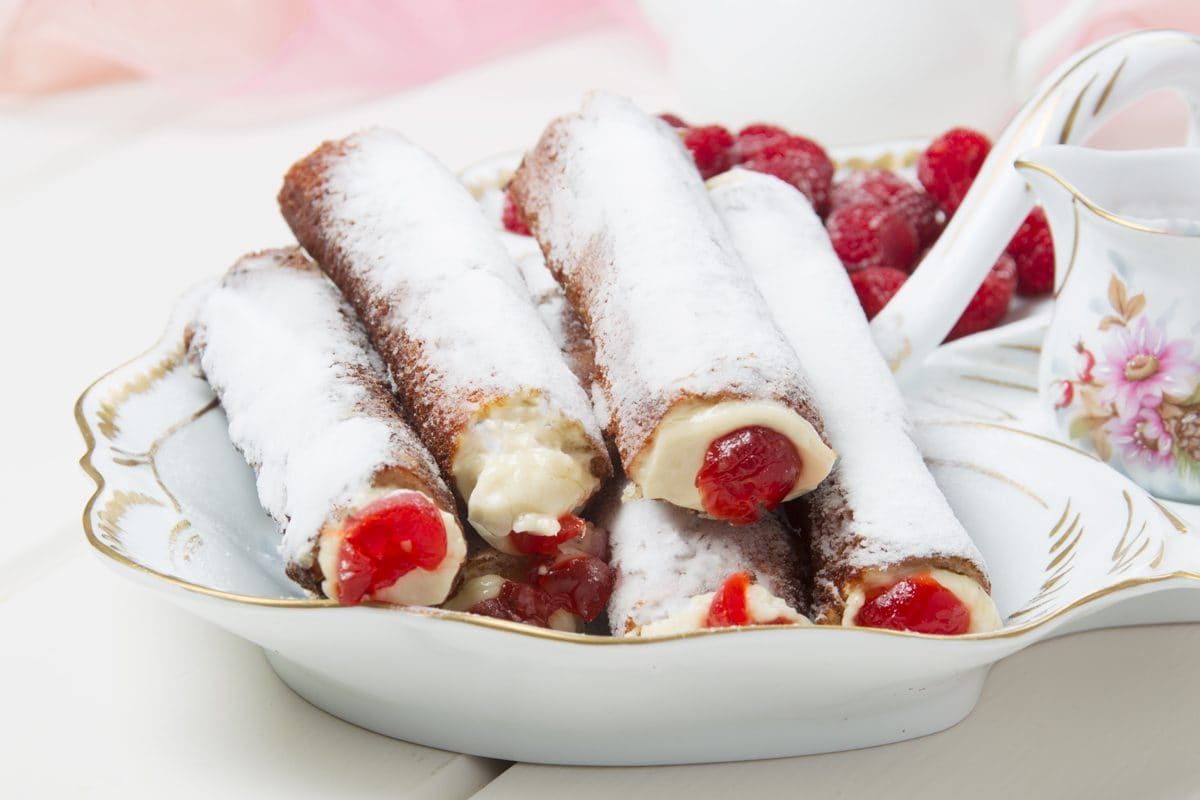 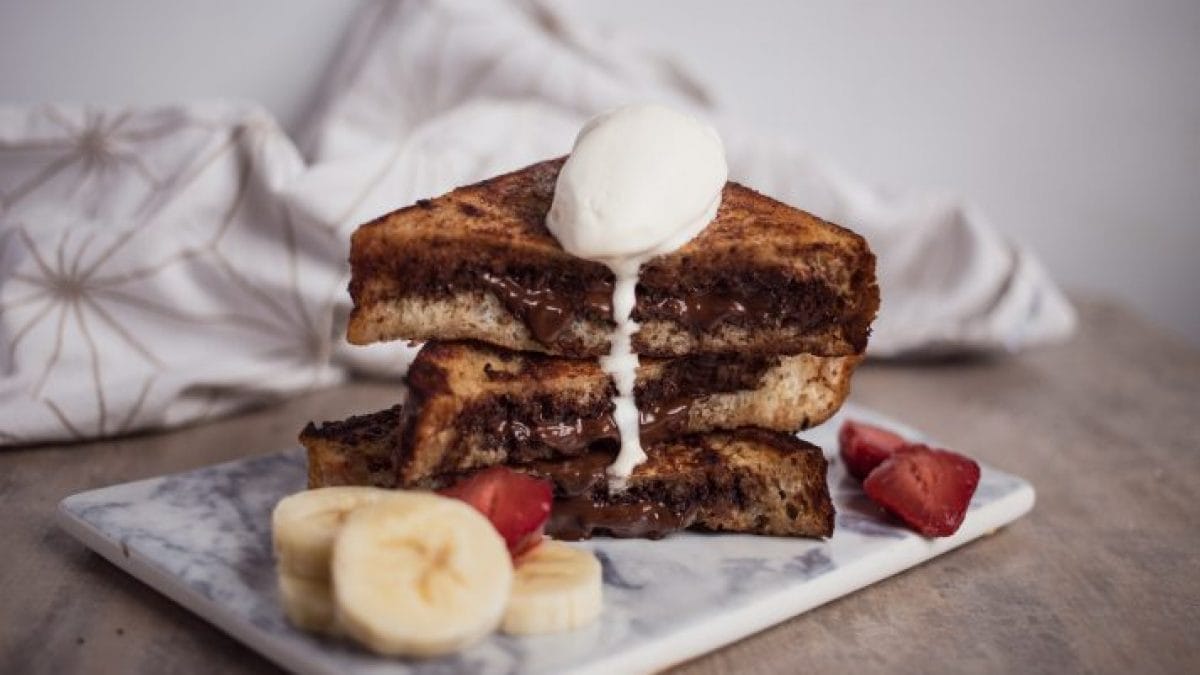