Keto Meat Sandwich: the recipe for meat triangles stuffed with ham and cheese

The mixture of keto meat sandwiches is very similar to that of meatballs, moist and soft, designed to accommodate a melting but at the same time compact filling.

So let’s see how to make really delicious keto meat sandwiches in a short time.

If you prefer, you can make a double breading, for an even more crunchy final result.

You can flavor the breadcrumbs with finely chopped aromatic herbs or spices.

For the filling, you can use cured meats and cheeses, but also vegetables such as zucchini, spinach, peppers, mushrooms.

You can use your favorite stringy cheese.

How to store Keto Meat Sandwiches

The keto meat sandwiches can be stored for 2 days in the refrigerator, covered with cling film.

You can freeze them before cooking or baking them only if you have used fresh ingredients.

How to make Keto Meat Sandwiches

Put the minced meat in a large bowl, add the breadcrumbs, soaked in milk and then squeezed.

Also add the eggs, then season with salt and pepper.

Give a quick stir and also add the grated parmesan cheese.

Knead again until the mixture is homogeneous.

Roll out half of the meat mixture on a sheet of parchment paper, giving the shape of a square about half a centimeter thick.

Add the slices of cheese.

Cover with the remaining meat, spreading it well over the entire surface.

Compact the stuffed square well, leveling the sides and eliminating any irregularities.

Bread the meat in breadcrumbs, first on the base.

Turn it over gently and also bread the other side.

Cut the square into 4 triangles by engraving it with two diagonals.

Also bread the cut sides of the sandwiches.

Arrange the meat sandwiches in a pan lined with parchment paper and lightly oiled.

Season the meat sandwiches with a drizzle of extra virgin olive oil, salt and pepper, then bake at 180° C (356° F) for about 20 minutes.

Remove from the oven and serve the keto meat sandwiches hot. 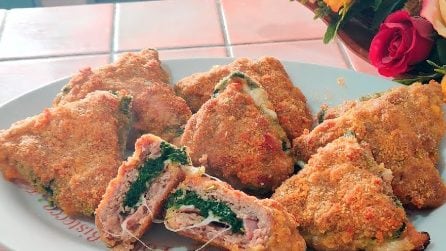 Meat sandwiches: the recipe to make a delicious meal
Views
679 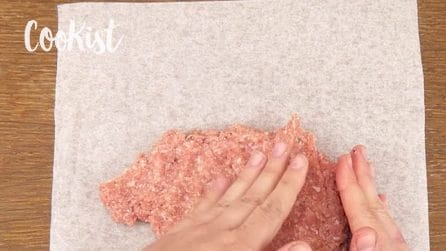 Meat Sandwich: they’re so good that you won’t be able to resist trying them!
Views
245.073 Meat Sandwich: you won’t be able to resist trying them!
Views
6.865