Mole is a rich, flavorful sauce that's used as a marinade or spooned over chicken, meat, plantains, and more, or swirled into soups and stews. Also known as mole poblano, this delicious traditional Mexican sauce has a sweet, spicy, smoky flavor.

Mole sauce is made from ingredients like dark chocolate, chili peppers, tomatoes, peanuts, garlic, raisins, spices, and more. It's incredibly complex in flavor and goes with a huge variety of dishes. There are many regional variations of mole sauce.

It's often served at celebrations like weddings, or for holidays like Day of the Dead or Mexican Independence Day. Mexican mole sauce is easy to make and is a perfect condiment to serve if you're making tamales, enchiladas, beans, or rice.

What is Mole Sauce?

Mole (pronounced “moh-lay”) is a traditional Mexican sauce that is used in everything from stews, soups, served over meat, quesadillas, and more. Mole comes from the Nahuatl word molli which means sauce.

Mole sauce is considered one of Mexico's national dishes. There are dozens of different regional variations of Mexican mole such as mole negro, mole poblano, mole verde, and more.

The reason why Mexican mole sauce is so delicious is because of all the wonderful, fragrant ingredients that go into it. Mole sauce is sweet, spicy, and smoky.

The sweetness comes from dark chocolate, sugar, raisins, and peanuts.

You'll need a few types of chili, including guajillo, ancho, and chipotle peppers.

Tomatoes and tomatillos add a tangy brightness, while tortillas and a dinner roll will help give the sauce a thicker texture.

Chicken broth acts as a base, but you can easily swap it out for a different type of stock depending on your dietary needs.

How to Make Mole Sauce

Let everything soak in the broth for about 10 minutes or so, or until the chilis and bread are totally soft, then blend the mixture until smooth. Dry roast the tomatoes and tomatillos for 3 to 4 minutes to blacken the skin, then pop them in the blender.

Sauté the onions, garlic, peanuts, raisins, and spices in the melted lard, until the onions become soft. Take out the cinnamon sticks then place the mixture in the blender and blend until smooth.

Add the sauce back into a skillet. Mix in the chocolate, chicken broth, salt, and sugar. Let the sauce come to a simmer, stirring occasionally. Cook it for 10 to 15 minutes, until it reduces, then serve.

How to Make Chicken Mole

To make chicken mole, sear the chicken on each side until browned. Pour the mole sauce over the chicken, cover, and cook for 20 to 30 minutes, or until the chicken reaches an internal temperature of 165F.

What to Serve with Mexican Mole Sauce

Mexican mole sauce goes with all sorts of classic Mexican dishes like tamales, tacos enchiladas, quesadillas, beans and rice, and more. It's fantastic spooned over grilled or smoked meats, poultry, or fish, and adds lots of complexity to soups and stews.

You can also use it to jazz up roasted veggies or drizzle it over your morning eggs – it's great with chilaquiles and migas as well.

You can make mole sauce up to one week in advance.

For a spicier mole sauce, add more chilies, or add habanero peppers, which are the spiciest type of Mexican chili, to your sauce.

If you're keeping tabs on your sodium intake, use low-sodium chicken broth.

You can make vegetarian mole sauce by swapping out the chicken broth for vegetable broth. There's mole negro, which has a more bitter and sweet, rich chocolate flavor.

Mole coloradito is a bit redder in color and is a favorite with chicken and enchiladas.

Another classic type of mole is mole Amarillo, which doesn't have chocolate or dried fruits in it.

Mole Verde, or green sauce, is made from cilantro, jalapeños, tomatillos, and seeds – great with poultry.

Finally, there's mole chichilo, which is only served on special occasions.

How to Store Mexican Mole Sauce

Keep your mole sauce in an airtight container in the fridge for up to one week.

To heat it, simply place it in a pot and warm it over medium-low heat until warmed through, adding more stock as needed.

Can You Freeze Mole Sauce?

Absolutely! Mole sauce will keep for up to 4 months in the freezer.

Heat 2 cups of chicken broth until it comes to a simmer. Pour into a blender.

Dry roast the chili peppers for 2 to 3 minutes, until aromatic. Place in the blender.

Dry roast the roll and tortillas until browned, about 2 to 3 minutes. Place in the blender.

Let everything soak in the broth for about 10 minutes or so, until fully softened.

Once soft, blend until smooth.

Dry roast the tomatoes and tomatillos for 3 to 4 minutes on each side, until soft and the skin blackens. Add to the blender.

Heat the lard in the skillet.

Sauté the onions, garlic, peanuts, cumin, raisins, thyme, cloves, cinnamon, and allspice for 6 to 8 minutes, until the onions become soft.

Take out the cinnamon sticks then place the mixture in the blender and blend until smooth.

Put the sauce into a skillet. Mix in the chocolate, 1 cup of chicken broth, salt, and sugar.

Stir occasionally, and let the sauce come to a simmer. Reduce the sauce for 10 to 15 minutes, and serve.

Use high-quality dark chocolate to make your mole sauce. 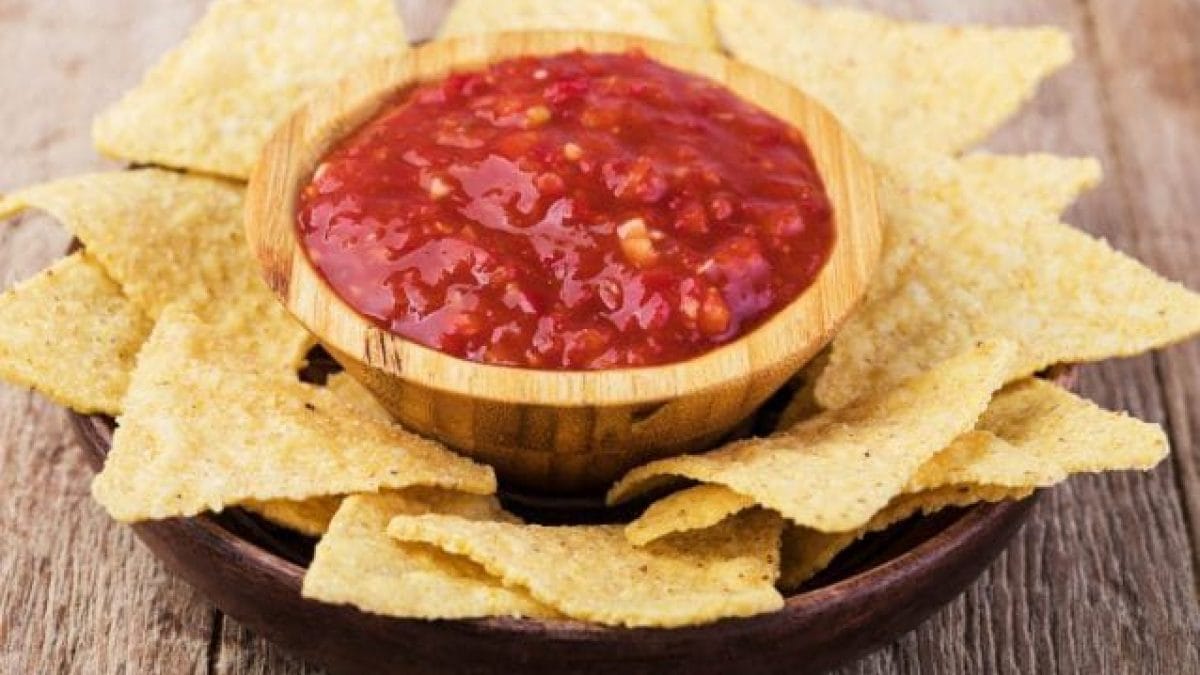 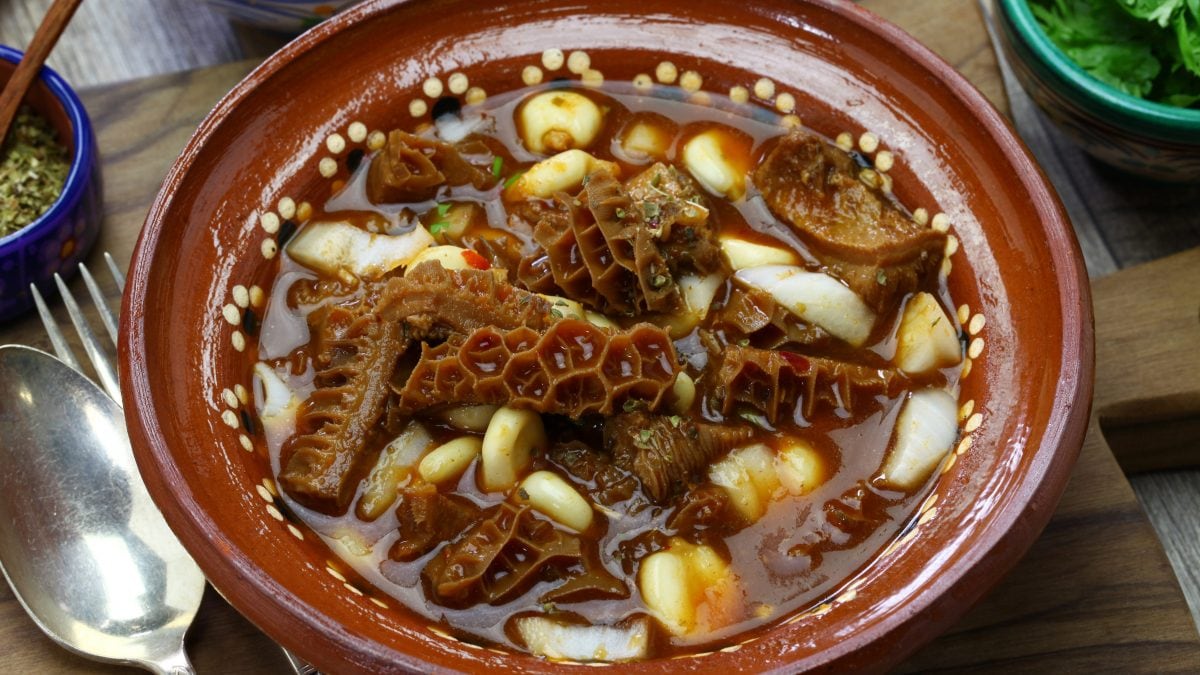 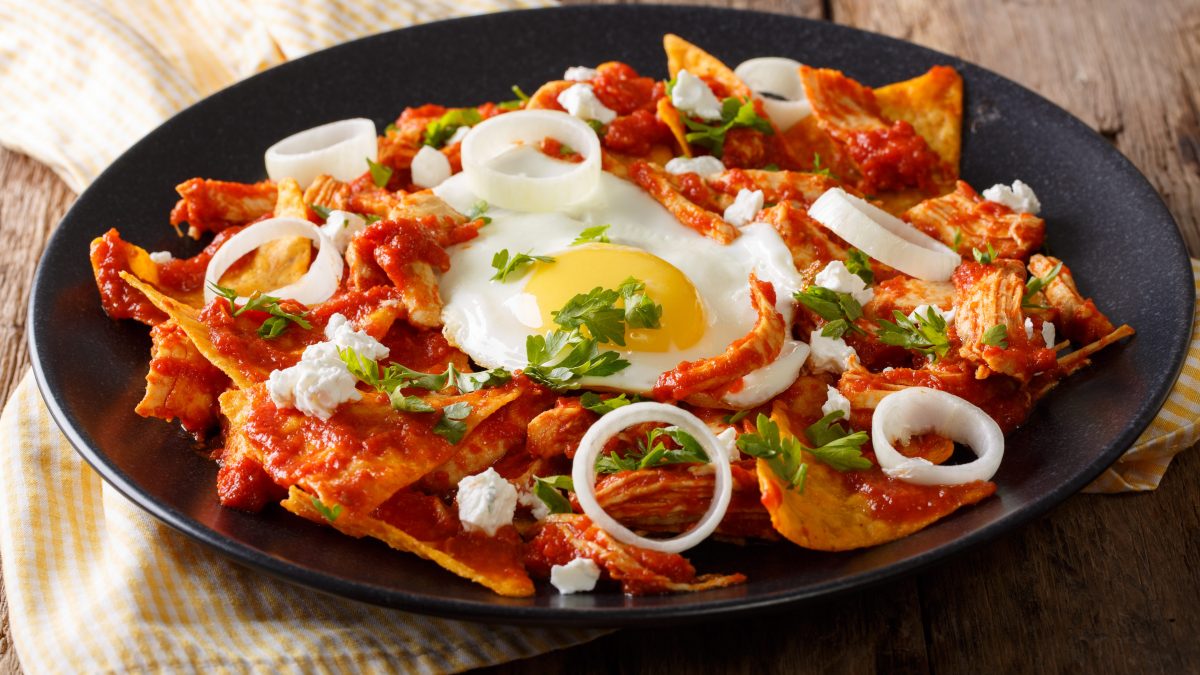