Pumpkin is synonymous with fall and if you're looking for fun, delicious new ways to enjoy everyone's favorite autumn gourd, you'll love these phenomenal pumpkin cheesecake doughnuts. These homemade pumpkin spice cheesecake doughnuts are even better than the ones you'll find at Krispy Kreme, and they're a wonderful treat to make on a chilly fall afternoon.

Pumpkin brioche doughnuts are perfectly fluffy, packed with a creamy, sweet pumpkin spice cheesecake filling, and rolling in pumpkin spice sugar – they're the ultimate dessert for anyone who loves the irresistible flavor of pumpkin spice!

You'll need plenty of pumpkin spice mix to make these delectable doughnuts – it's an essential ingredient in both the filling and doughnuts. You'll also need some canned pumpkin, bread flour, all-purpose flour, sugar, vanilla, and butter to make the doughnuts.

The milk, eggs, plus an extra egg yolk will make the doughnuts more brioche-like and ultra-soft.

How to Make Pumpkin Cheesecake Doughnuts

To make these beautiful, fluffy pumpkin brioche doughnuts, start by whisking the flour, sugar, yeast, salt, and pumpkin pie spice in a large bowl. Place the eggs, pumpkin puree, vanilla extract, and milk into the bowl of your stand mixer, then sift in the flour mixture and add the butter. Beat the mixture for 10 to 15 minutes, or until the dough is nice and smooth and comes away easily from the sides of the bowl. Put the dough into an oiled bowl, cover it with a damp towel, and leave it somewhere warm to rise for an hour or so.

While the dough is proofing, making the pumpkin cheesecake filling. Beat the cream cheese, powdered sugar, pumpkin pie spice, vanilla, and salt until it becomes fluffy. Beat in the cream until the mixture becomes smooth, then pop it in the fridge until it's time to use it. Cut the dough into 14 pieces and shape them into balls, then let them rest for another half an hour or so.

Now it's time to get frying! Heat some oil in a deep pot and fry the doughnuts a few at a time for 2 minutes on each side. Let them drain on a wire rack and repeat with the remaining doughnuts. Roll the doughnuts in the pumpkin pie spice sugar, then transfer the cream cheese filling to a piping bag. Poke a hole into each doughnut, then fill the doughnuts with the filling. That's it – the hardest part is trying not to eat more than one!

Properly seal the doughnuts when shaping them so they don't open up when you're frying them.

Use a candy thermometer to know when the oil has reached the ideal temperature for frying.

Don't let the oil get too hot when you're frying the doughnuts.

Make sure you don't overcrowd the Dutch oven when you're frying the doughnuts. They'll need enough space to cook properly.

You can make these delicious pumpkin cheesecake doughnuts low-carb by using almond meal instead of flour and your preferred sweetener (such as erythritol or monk fruit) instead of sugar. Just make sure to use unsweetened canned pumpkin to make your doughnuts.

Can I Make Pumpkin Cheesecake Doughnuts Ahead?

Absolutely! You can make pumpkin cheesecake doughnuts up to 1 day in advance.

How to Store Pumpkin Cheesecake Doughnuts

Place your doughnuts in an airtight container and separate each layer with some parchment paper. Keep them in the fridge for 3 to 5 days. Because they have cream cheese, these pumpkin cheesecake doughnuts will need to be refrigerated if you have leftovers.

Put eggs, pumpkin puree, vanilla extract, milk and butter into the bowl of your stand mixer.

Sift in the flour mixture. Beat on low until combined. Increase the speed to medium and beat for 10 to 15 minutes, or until dough comes away easily from the sides of the bowl.

Grease a bowl with oil then place the dough in the bowl.

Cover with a damp towel or transparent film and leave to rise for 1 hour, or until doubled in size.

While the dough is proofing, making the filling. Beat cream cheese, powdered sugar, pumpkin pie spice, vanilla, and salt until light and airy. Beat in the heavy cream and mix for 2 minutes, or until smooth. Cover and refrigerate until ready to use.

Wait until the dough is doubled in size.

Line two baking trays with parchment paper. Spray them with cooking spray. Punch down the dough and divide it into 14 equal pieces. Shape each piece into a ball.

Place each piece on the prepared baking tray. Cover with a damp towel and leave for 20 to 30 minutes to rise.

Remove with a slotted spoon and place on a rack to cool and drain excess oil. Repeat with remaining doughnuts.

While the doughnuts are cooling, mix the pumpkin spice and sugar in a bowl.

Roll the cooled doughnuts in the mixture to coat.

Transfer the cream cheese filling to a piping bag. Poke a hole into each doughnut. 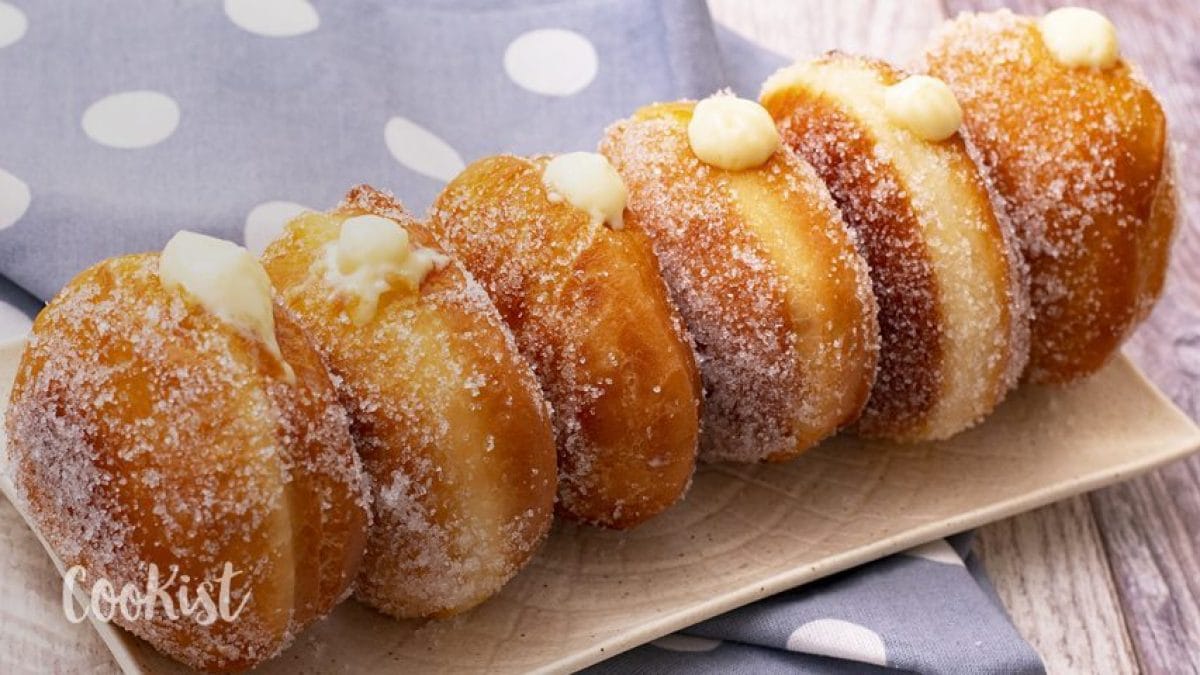 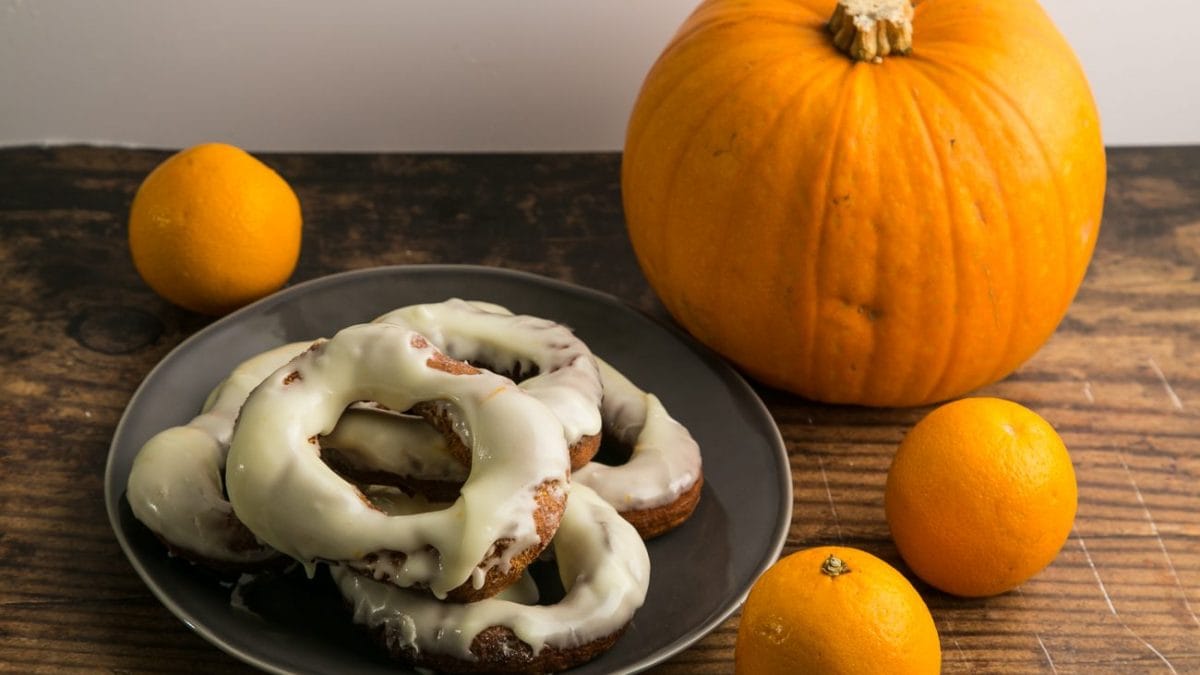 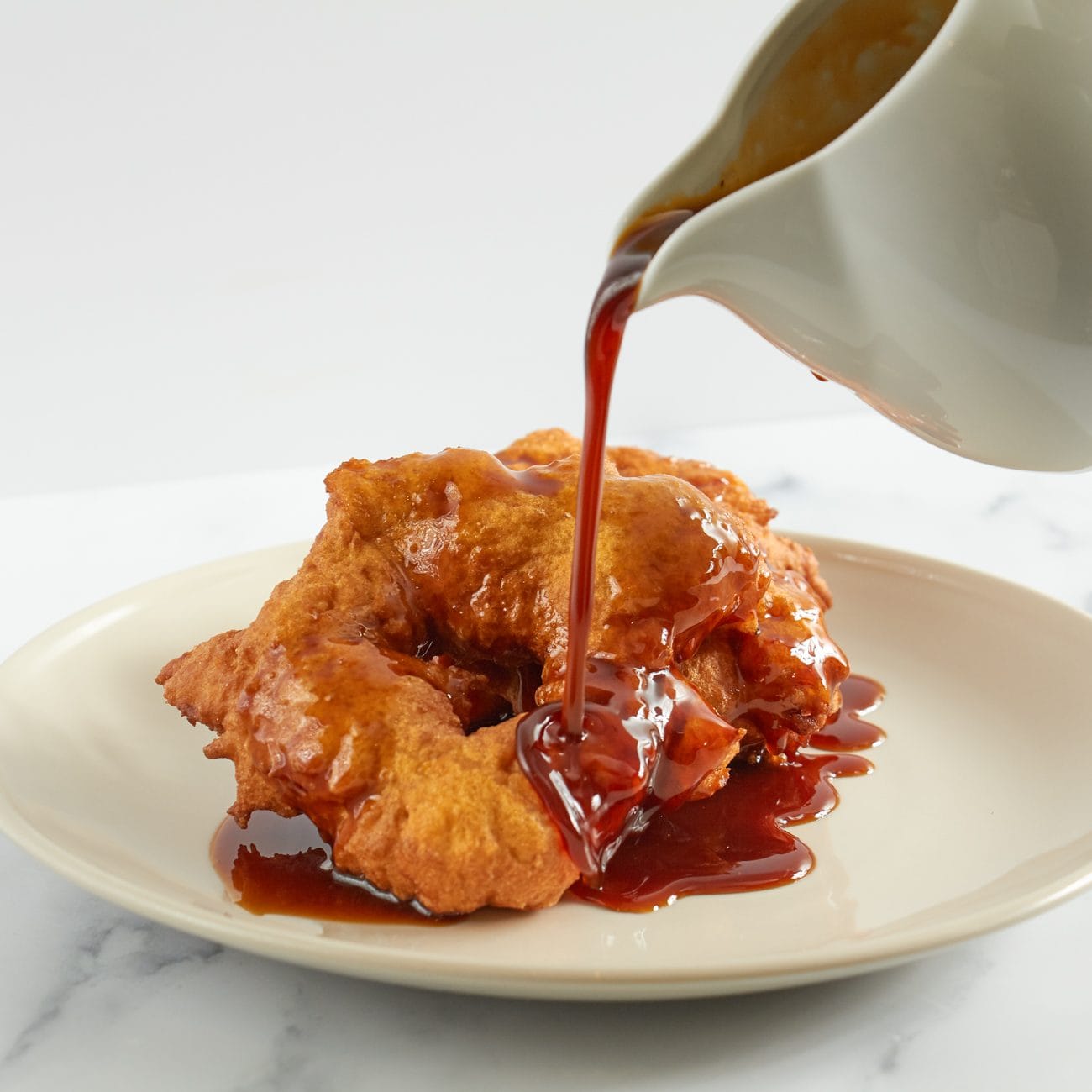