Spaghetti with clams is a classic Neapolitan recipe. Spaghetti, clams, just two cherry tomatoes and a lot of fresh parsley. This sea dish features few ingredients and an amazing taste.

How to make spaghetti with clams and garlic

Use fresh clams.Do not pour in white wine, the clams would lose their taste.Discard any clams that are still closed.Reserve a spoonful of the pasta cooking water, it may turn useful if the spaghetti appear to be dry.

According to tradition, spaghetti alle vongole is a classic main course of Christmas Eve in Naples. It soon gained its place also in other Italian regions, which customized the recipe. In Venice, for example, spaghetti with clams is prepared with the addition of ginger. About the Neapolitan recipe, some argue that it should be “in bianco”, without any addition of tomato sauce, whilst some are proud supporters of the “red version” with tomato sauce on it. We opted for an intermediate version, in white but with the addition of some cherry tomatoes, “no more than 2” so as not to alter the taste of clams. White, red or just slightly spotted, this dish is delicious!

Spaghetti with clams can be made in two different ways:

In white: the method is the one we have shown you – just skip the addition of the two tomatoes. In red: add tomato sauce to lightly fried garlic and oilThere are no other variations: if you add vegetables or other ingredients, it will be no longer spaghetti with clams but a different recipe. 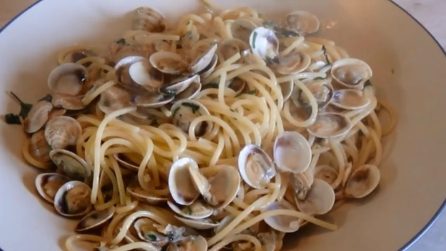 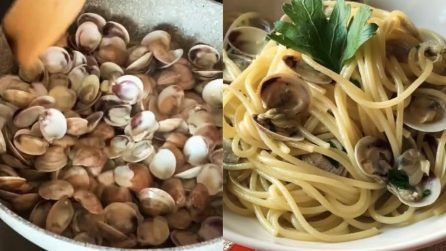 1.234 • by Love Kitchen
Spaghetti with clams: a delicious and easy first dish
3 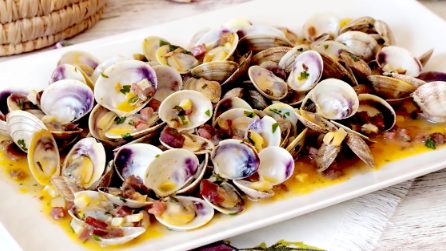 430 • by Recipe ideas
Clam Sauté: the recipe for a really tasty seafood dish
423 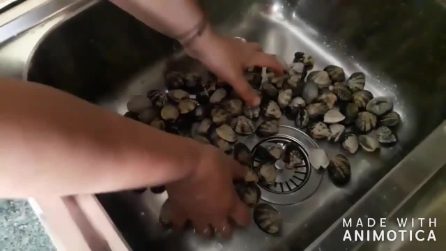 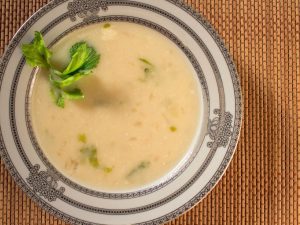 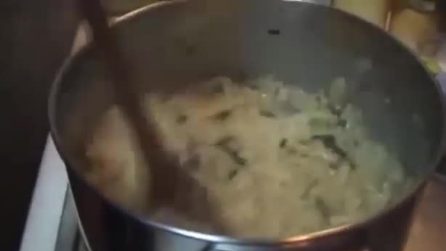