If you're looking for an incredible, delicious dessert you can serve at Thanksgiving this year, you'll love this easy Southern sweet potato pie recipe. With a generous dose of cinnamon, allspice, and ginger, this silky, creamy sweet potato pie with its flaky, crisp brown crust hits all the right notes for fall.

Although it has a similar spicy, sweet flavor as the pumpkin pie, as its name suggests, sweet potato pie is made with sweet potatoes. It's also served with a dollop of marshmallow whipped cream, which complements the flavors in the pie beautifully.

Southern sweet potato pie is easy to make yet looks impressive on the table and is an absolute delight to the senses. It's the perfect way to end a delicious Thanksgiving dinner!

Sweet potato pie dates back to the early colonial period of the United States. It's thought that the sweet potato was used by West African slaves as a substitute for yams. Originally, sweet potato pie was considered a savory dish, but over time, it evolved into a dessert.

Brown sugar enhances the sweet flavor of the pie, while spices like ginger, allspice, and cinnamon give sweet potato pie its incredible taste.

Evaporated milk and butter lend a creamy, silky texture to this dessert, and bourbon gives it a little kick.

You'll also need a pie crust, which you can make yourself or pick up from the supermarket, plus some whipped cream and marshmallow crème to make the topping.

How to Make Sweet Potato Pie

Ready to get baking? Start by placing the crust in the pie pan. Cut off any extra pastry, then crimp the edges and pop the crust in the fridge. Now for the filling. Simmer the sweet potatoes for 15 to 20 minutes, then drain and mash them.

Scoop out 2 cups of sweet potato (you can save any extra for another recipe), then put it back in the saucepan. Stir in the brown sugar, cinnamon, ginger, allspice, salt, butter, and half the evaporated milk, and heat it over a low flame, mashing the ingredients together as it cooks. For an ultra-silky smooth filling, you need to blend, blend, blend. Use an immersion blender to puree the filling until smooth. Take the pot off the heat and leave it to cool. In a large bowl, beat the remaining 5 ounces of evaporated milk, sugar, eggs, bourbon, and vanilla extract, then mix it into the sweet potato mixture.

Pour the pie filling into the crust and bake the pie for 10 minutes at 350F. After 10 minutes, reduce the heat to 325F and bake for 50 minutes, or until the pie is cooked through. Remove from the oven and set on a rack to cool completely.

To make the topping, toast the coconut over medium-low heat until it starts to brown, about 6 to 8 minutes. Make sure you stir it constantly, so it doesn't burn. Transfer to a bowl and set aside. Beat the whipping cream until soft peaks form, then beat in the marshmallow crème and vanilla.

Now it's time to serve the pie! Cut the pie, and serve it with a dollop of whipped cream and sprinkling of toasted coconut.

Whipped marshmallow cream is the classic topping for sweet potato pie, but there are plenty of other delicious ways you can decorate your dessert.

You can add a dash of ginger to the whipped cream to spice things up. Another tasty option is to make a meringue and lightly toast it.

Candied pecans are wonderful as a sweet potato pie topping, as is a brown sugar streusel. Both are sensational for adding an irresistible bit of crunch to every bite.

To make sure the crust doesn't get soggy, you can blind bake it for 8 to 10 minutes, then let it cool before adding in the filling.

If you're looking to make a vegan sweet potato pie, swap out the evaporated milk for coconut cream, and use oil instead of butter.

If your sweet potato pie is a little runny, cook it for an extra 5 to 10 minutes. It should be a little jiggly when it comes out of the oven. As it cools, the pie will set.

If you don't have evaporated milk, you can use condensed milk, but make sure to reduce the amount of sugar you use; condensed milk is already sweetened.

For a delicious twist on this recipe, you can roast your sweet potatoes instead of boiling them. It'll give your pie a richer flavor.

How to Store Sweet Potato Pie

Cover or wrap your sweet potato pie and refrigerate it for up to 5 days.

Can You Freeze Sweet Potato Pie?

For long-term storage, you can freeze your sweet potato pie. Place it in an airtight container and freeze it for up to 3 months. When you're ready to enjoy it again, defrost it in the fridge overnight.

Preheat your oven to 375F. Place the pie crust in the pie pan. Cut off excess pastry and crimp the edges. Refrigerate for 30 minutes up to overnight.

Measure out 2 cups of sweet potato and place it in the pot. Stir in the brown sugar, cinnamon, ginger, allspice, salt, butter, and 5 ounces of evaporated milk. Cook over low heat for 5 minutes, mashing the ingredients into the sweet potatoes.

Blend the sweet potato mixture with a handheld electric blender until totally smooth. Take the pot off the heat and leave it to cool.

In a large bowl, beat the remaining 5 ounces of evaporated milk, sugar, eggs, bourbon, and vanilla extract. Mix the egg mixture into the sweet potato mixture.

Take the pie crust out of the fridge and pour the pie filling into the crust. Put the pie pan onto a baking sheet and bake the pie for 10 minutes. After 10 minutes, reduce the heat to 325F and bake for 50 minutes, or until cooked through. Remove from the oven and set on a rack to cool completely.

In a large skillet, toast the coconut over medium-low heat until lightly browned, about 6 to 8 minutes. Transfer to a bowl and set aside.

In a medium-sized bowl, beat the whipping cream until soft peaks form. Beat in the marshmallow crème and vanilla.

Cut and serve the pie with a dollop of whipped cream and sprinkling of toasted coconut. 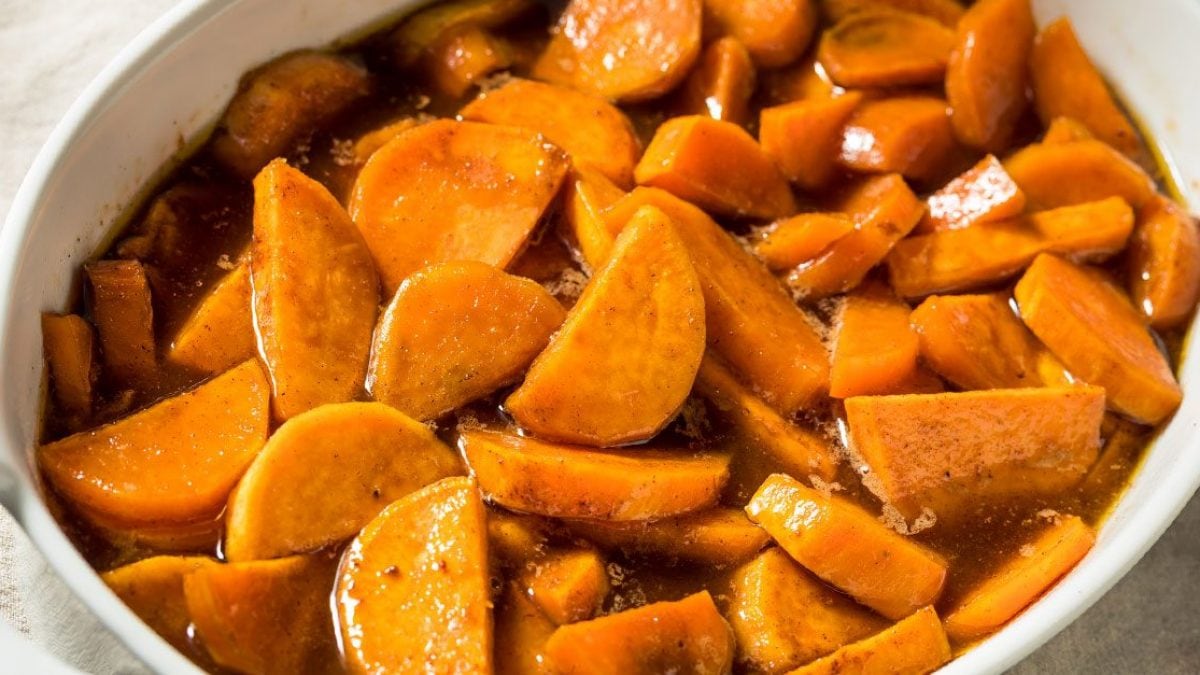 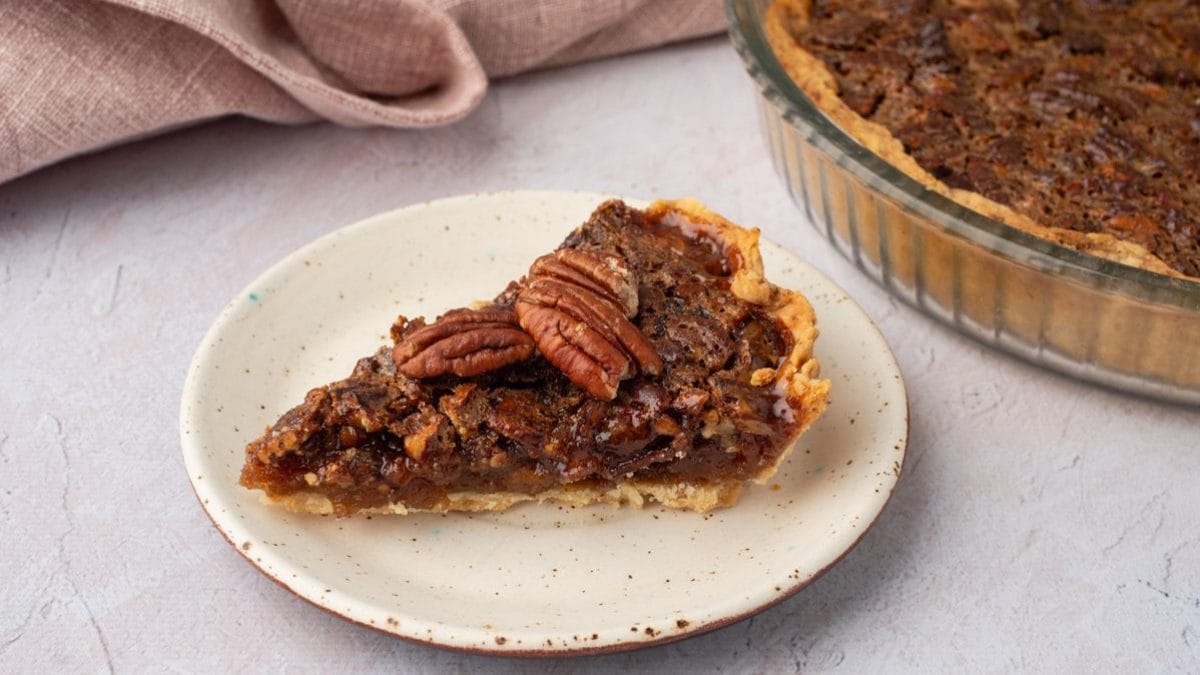 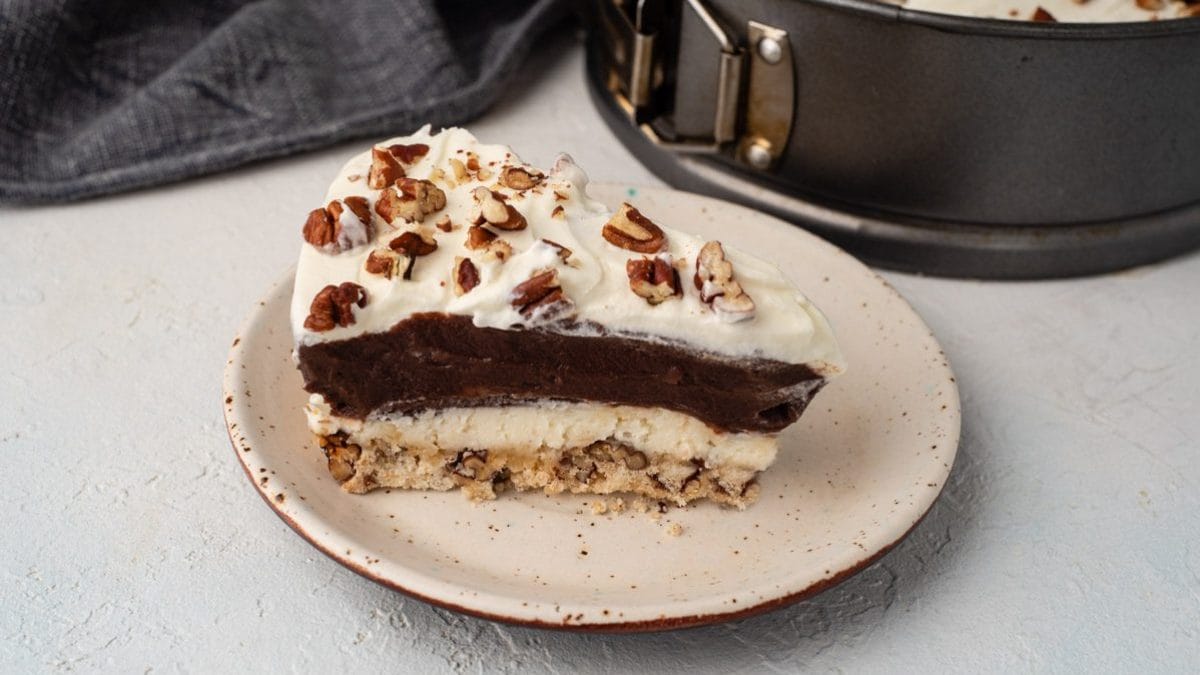