The poke cake is born in America around 1970 and, lately, it has come back in fashion thanks to social networks. It is charcterized by the holes on the surface so that the cream can enter in the center of the cake. The original version was with strawberries, but afterwards the versions of the poke cake have multiplied. Today I propose you the recipe of the chocolate poke cake, a cake completely made with dark chocolate, a true paradise for the gluttonous.

What is chocolate poke cake?

So what is a poke cake? According to its name, it's a cake that you make holes after baking. Its chocolate version is prepared with dark chocolate and is suitable for those who love cakes full of chocolate

How to make chocolate poke cake

Liquefy the dark chocolate in the microwave oven, but open the oven every 30 seconds to avoid burning it. Then bring the chocolate to room temperature (1). After, put sugar and butter at room temperature in a large bowl (2). Blend everything with an electric whisk, until you get a clear and foaming mixture (3). Then add also the egg yolks, and continue blending your dough.

Add the melted chocolate (4), and blend. Sift the flour along with the baking powder, and add it to the dough (5). To prevent the formation of lumps, amalgamate well the ingredients. Then, beat the egg whites until stiff (6).

Add the egg whites to the rest of the mixture, gently blending it from the bottom to the top so that they do not collapse (7). Pour the dough into a previously buttered and floured baking pan, and then put it into the oven for about 30/40 minutes (8). After the cooking, let the cake cool down (9).

Make some holes on the surface with a wooden spoon handle (10), without too much pressure. Prepare the chocolate ganache by almost boiling the cream into a small pot (11). Chop finely the chocolate, and put it in a bowl. Pour the hot cream on chocolate, and blend until the two ingredients are perfectly amalgamated. When the cake has cooled down, pour the ganache on it (12).

Whip the cream until it is compact (13), and pour it on the surface of the cake (14). Roughly crush some walnuts (15), and let them slightly toast in a non-stick frying pan. After they have cooled down, put them on the cake to decorate. Before serving, keep the poke cake in the refrigerator.

Can I make poke cake with chocolate pudding?

Yes. Pour the pudding evenly over the cake. Run the knife along the sides of the pan to soften the poke cake. Refrigerate for about 2 hours or until it cools.

How to store Chocolate Poke Cake

The chocolate poke cake should be kept in the refrigerator, in a hermetically sealed container, for a maximum of three days. It is important to preserve this cake well, because otherwise cream and also the chocolate ganache can lose their consistency. 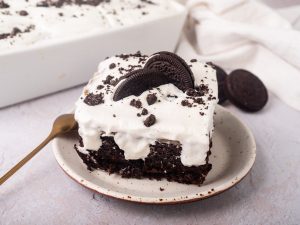 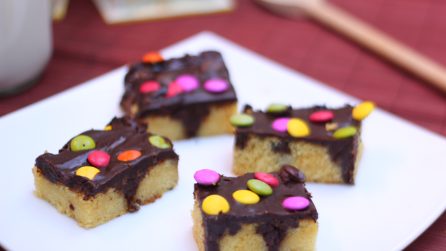 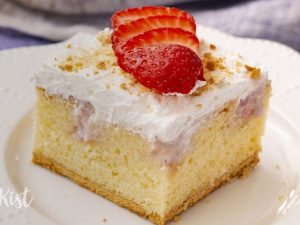 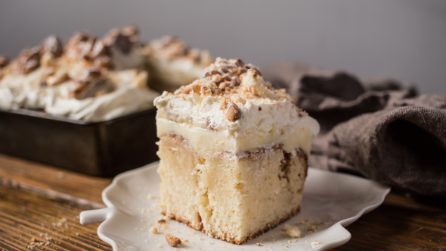 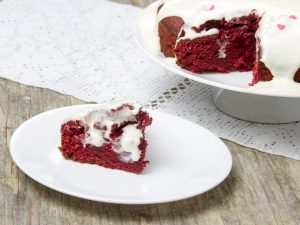 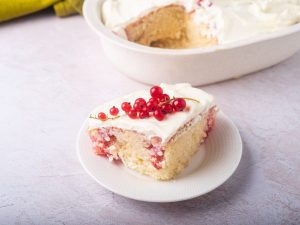