Fresh spinach dip is a crowd-pleasing, creamy and cheesy dip to serve as an appetizer to a crowd. Pair it with your favorite crackers, chips or veggies for an easy go-to party recipe.

This cheesy dip is made with three kinds of cheese: cream cheese, savory parmesan and melty mozzarella. The mozzarella and parmesan are shredded and mixed into the spinach dip, with a bit more mozzarella sprinkled on top for good measure. The cream cheese, on the other hand, forms the base of the thick and decadent dip, along with sour cream, garlic and, of course, fresh spinach.

The great part about this savory dip recipe is how versatile it is. You can easily make it ahead of time and store it in the fridge, or make a big bach and freeze it for later. Plus, there are dozens of ways to serve the dip. Try a bread bowl, straight out of a skillet, or even chilled for a warm-weather appetizer that never disappoints.

How to Make Spinach Dip

This creamy mixture goes into a baking dish or an oven-safe skillet to be baked to creamy, gooey perfection in about 20 minutes.

In a skillet, cook the spinach until wilted. Cool then squeeze out any water from the leaves. Chop the spinach.

Spread the spinach mixture in the prepared baking dish and cover with the remaining mozzarella cheese.

Bake for 20 minutes or until bubbly and golden on top. Broil for 2 to 3 minutes to brown the top.

Sprinkle with chopped parsley and serve.

How to make healthy spinach dip

If you want to make a healthier version of this recipe that’s just as creamy, you can swap out the cream cheese or sour cream for low-fat or fat-free plain Greek yogurt. The yogurt adds a nice tang, though the dip won’t be quite as thick as the original recipe.

Can I freeze spinach dip?

You can certainly make a big batch and freeze some (or all) of the creamy spinach dip. It lasts for up to three months in an airtight bag or container in the fridge. Make sure there’s no air in the bag before freezing to avoid ice crystals. Then, to serve, let the dip thaw overnight in the fridge before reheating in the oven.

How long does spinach dip last?

This spinach dip will last for up to three days in the refrigerator. You can assemble it and cover it before baking it if you like. Then add a few minutes to the baking time to account for the cold dip.

It’s easy to make this recipe your own. Add your favorite flavorings and mix-ins, such as:

– Bacon Spinach Dip, flavored with crisp, crumbled bacon bits that you fry in a skillet first.

– Herby Spinach Dip, speckled with any of your favorite chopped fresh herbs.

– Caramelized Onion Spinach Dip, which you can make by stirring in creamy, melted caramelized onions in before you bake the dip.

What To Serve with Spinach Dip

Can I Heat Up Spinach Dip?

Yes! This cheesy spinach dip recipe is warmed in the oven and best served immediately after you make it. The cheese is soft, gooey and melted when it's warm. Of course, it will still be just as tasty as it cools down. If your dip gets too cool, you can easily pop it back into a hot oven until the top is bubbly and melty again.

What Chips Are Best with Spinach Dip?

You can serve this cheesy dip with any of your favorite chips. Salty potato chips without other competing flavors are especially delicious. Avoid strong flavors like barbecue chips, which can mask the delicate flavors of your homemade dip. 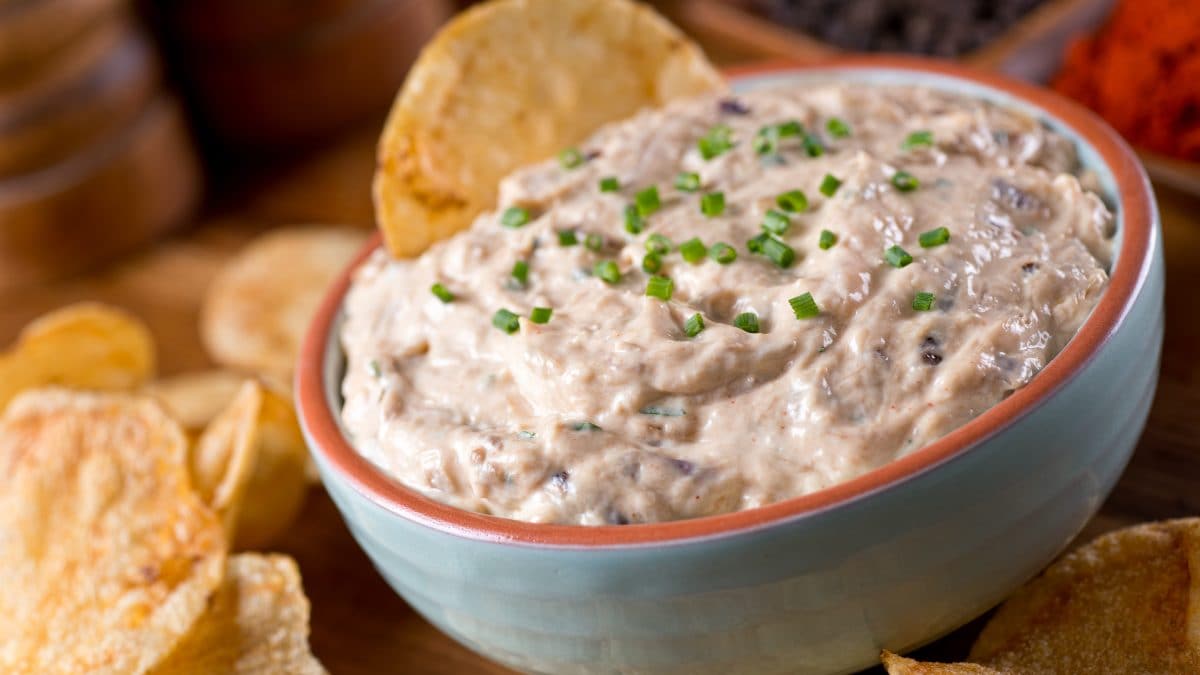 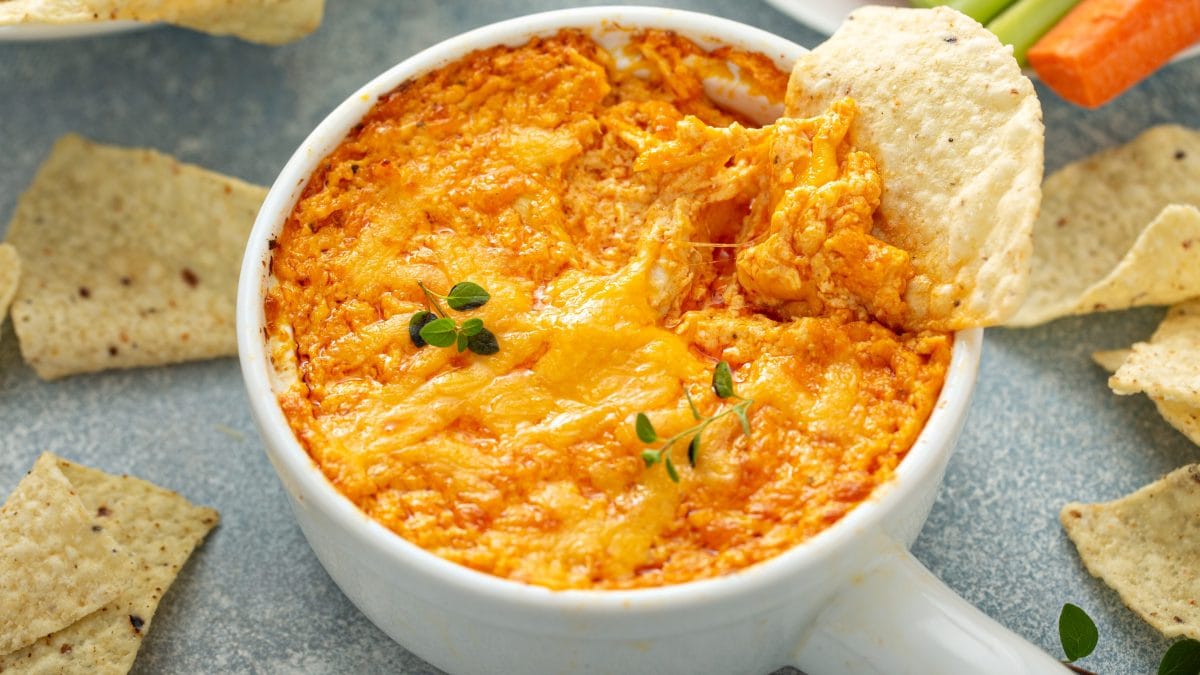 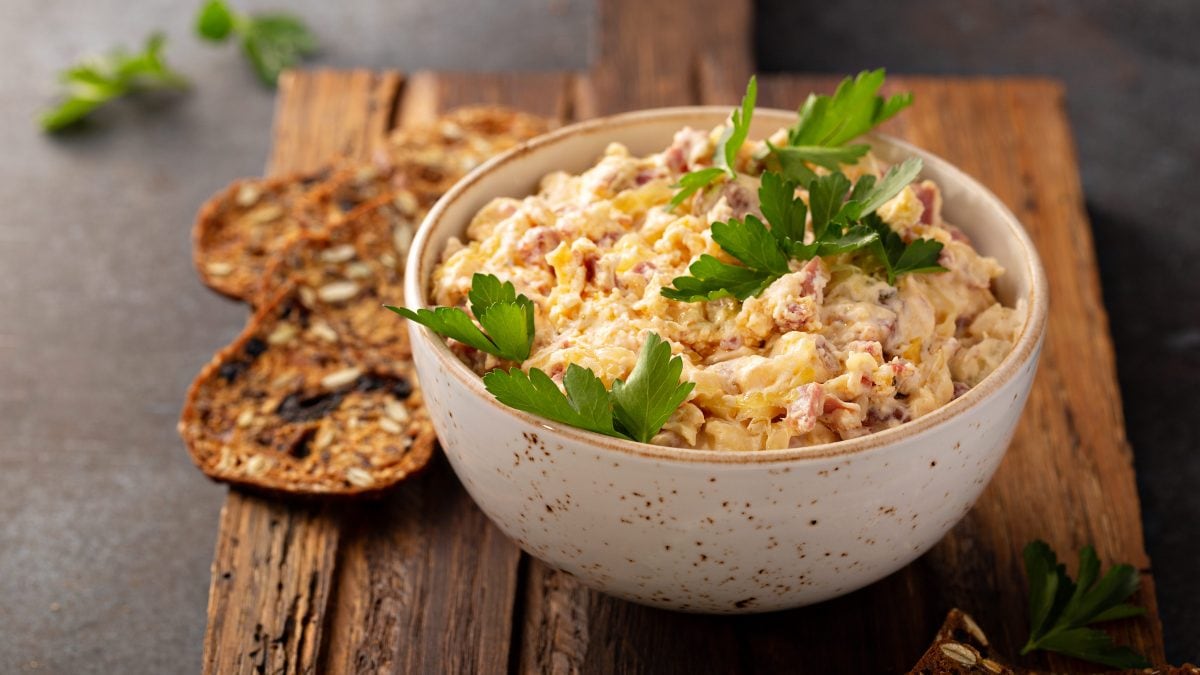