The texture is just what you’d expect—soft and doughy with just the right amount of cinnamon crunch. The cream cheese on top adds the final layer of flavor and makes you want to come back for more. Now you can indulge in cinnamon bun cravings any time you want. Whip up this easy Giant Cinnamon Roll at home, and invite your friends to join (or have it all by yourself…we won’t tell!)

How To Make Giant Cinnamon Roll

Start by making the dough. Mix together the ingredients and leave to rest for an hour. Once rested, knead the dough until smooth. Roll the dough out into a rectangle. Mix the ingredients for the filling and spread on top of the dough (make sure to spread it right up to the edges).

Use a pizza knife to cut the dough into strips, roll them up and place in a cake pan (or a cast-iron skillet). Leave to rest until double in size. Bake and top with the cream cheese topping. Slice, serve, and enjoy!

Use a 9-inch cake pan, or a well-seasoned 9-inch cast-iron skillet (make sure it has higher sides).

You can prepare the Giant Cinnamon Roll the night before and store it in the fridge overnight before baking.

How To Store Giant Cinnamon Roll

Store leftovers in the fridge for up to 4 days.  It can also be frozen. Make sure to wrap it tightly in plastic wrap and freeze for up to 3 months. Thaw in the fridge overnight and reheat in the microwave or the oven before eating.

Generously butter a 9-inch cast-iron or cake pan. In a large bowl, whisk together warm milk, melted butter, and granulated sugar. The mixture should be just warm, registering between 100-110˚F (40˚C).

Sprinkle the yeast evenly over the warm mixture and let sit for 1 minute.

Add 4 cups of all-purpose flour to the milk mixture and mix with a wooden spoon until just combined.

Cover the bowl with a towel or plastic wrap and set in a warm place to rise for 1 hour.

Preheat oven to 325˚F (160˚C). After 1 hour, the dough should have nearly doubled in size. Remove the towel and add an additional ¾ cup of flour, the baking powder, and salt. Stir well, then turn out onto a well-floured surface.

Knead the dough lightly, adding additional flour as necessary (about ½ cup), until the dough just loses its stickiness and does not stick to the surface. Roll the dough out into a large rectangle, about ½-inch thick. Fix corners to make sure they are sharp and even.

In a small bowl combine the filling ingredients and stir to combine.

Starting from the bottom, roll the first strip up right to left. Take the first roll and place it back on top of the next strip, starting again on the right side and rolling up right to left, building on the first. Continue with the remaining two strips until you have a giant cinnamon roll.

Place the giant cinnamon roll in the prepared cast iron or cake pan and cover with plastic wrap. Place in a warm spot and leave to rise for 30 minutes. The cinnamon roll should expand to the edges of the pan during this time. Bake for 45 minutes. Cover the cinnamon roll with foil to prevent the outside from burning, and bake for an additional 35 minutes.

While the cinnamon roll is baking, prepare the frosting. In a medium-size mixing bowl, whisk together cream cheese, butter, vanilla, whole milk, and powdered sugar, until smooth.

Remove the cinnamon roll from the oven and let cool in the pan for at least 20 minutes. Once cool, remove from pan and drizzle frosting over the roll before serving.

You can also top the Giant Cinnamon Roll with vanilla or chocolate frosting. 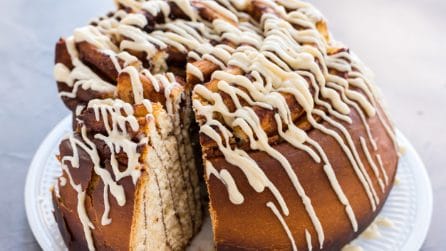 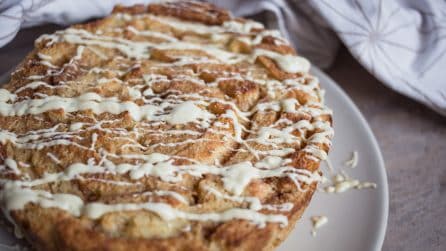 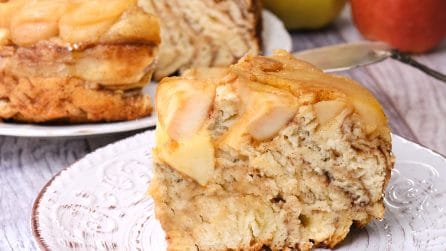