If you love potatoes but are getting bored with making baked potatoes week in, week out, it's time for you to meet the Hasselback potato. This phenomenal potato side dish is as impressive looking as it is delicious.

Made by thinly slicing a potato, baking it, and stuffing it with cheese, Hasselback potatoes are the perfect way to take your baked potatoes to the next level.

Tender on the inside with beautifully crispy skin on the outside, Hasselback potatoes are so easy to make, you may never go back to old-school baked potatoes again. Serve them with everything from steaks to stews, roasts, soup, and more.

What are Hasselback Potatoes?

Hasselback (pronounced “has-sel-back”) potatoes are a delicious potato dish. It's made by slicing a potato without cutting completely through it, almost like a fan or accordion, baking it, then adding cheese between the cuts and popping it back in the oven until it melts.

The dish dates to the 1950s and was first served in a Swedish restaurant called Hasselbacken, hence the name. It became a wildly popular dish and is enjoyed all over the world to this day.

You don't need any fancy ingredients or equipment to make the best Hasselback potatoes at home.

Cheese is essential. Cheddar is a popular choice, but you can use any variety you like.

You'll also need olive oil, butter, salt, and pepper to brush over the potatoes while they're baking.

How to Make Hasselback Potatoes

If you're ready to make the best Hasselback potatoes, here's your simple step-by-step guide. Start by heating your oven to 450F. A hot oven is essential for beautifully baked potatoes. Arrange foil on a baking tray and grease it with cooking spray.

How to Cut Hasselback Potatoes

Cutting the potatoes is the trickiest part of making Hasselback potatoes. Slice the potatoes about 1/4-inch down horizontally without cutting all the way through them. You want the overall potato to stay connected, but have enough space to stuff it later.

How to Bake Hasselback Potatoes

Mix the olive oil, butter, salt, and pepper in a small bowl. Brush the seasoned oil over the potatoes, as well as in between each of the cuts. Bake the potatoes for 50 to 60 minutes, or until they're fork-tender.

Take the potatoes out of the oven and cool them for 5 minutes. Put a piece of cheese in between each of the cuts in the potatoes. Bake for 3 to 5 minutes more, or until the cheese has melted. Garnish the potatoes with sour cream, bacon, and spring onions, and enjoy!

There are loads of fun, tasty ways to customize your Hasselback potatoes.

Instead of bacon, you can crumble sausage, pancetta, or sautéed garlic mushrooms over your potatoes.

If you like spice, add a little cayenne pepper, chili flakes, or smoked paprika to your potatoes.

The best potatoes for Hasselback potatoes are Russet, Idaho, and Maris Piper. However, you can definitely use smaller types of baking potatoes with equal success.

You can place two chopsticks on either side of the potatoes to help stop you from cutting all the way through when slicing them.

You can make Hasselback potatoes on the grill. Cook them over indirect heat for about 45 to 50 minutes or until tender.

What to Serve with Hasselback Potatoes

You can even eat a Hasselback potato as your main meal with a side salad and a few roasted veggies.

How to Store Hasselback Potatoes

Keep leftover Hasselback potatoes in an airtight container in the fridge for up to 4 days.

How to Make Hasselback Potatoes

Preheat your oven to 450F. Line a baking tray with foil, then brush with olive oil or cooking spray.

Preheat your oven to 450F. Line a baking tray with foil, then brush with olive oil or cooking spray.

Slice the potatoes 1/4-inch down horizontally without cutting all the way through them. 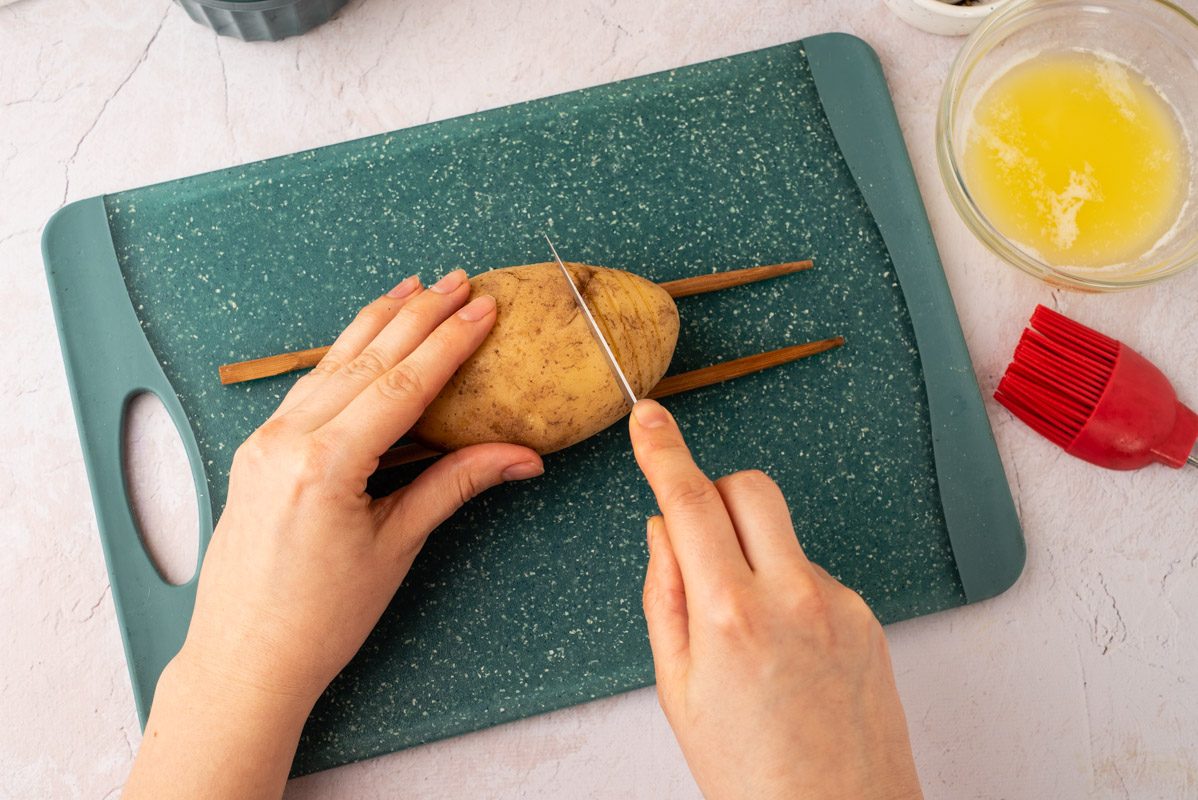 Combine the olive oil, butter, salt, and pepper in a small bowl.

Slice the potatoes 1/4-inch down horizontally without cutting all the way through them.

Brush the mixture generously over the potatoes, and in between the cuts. 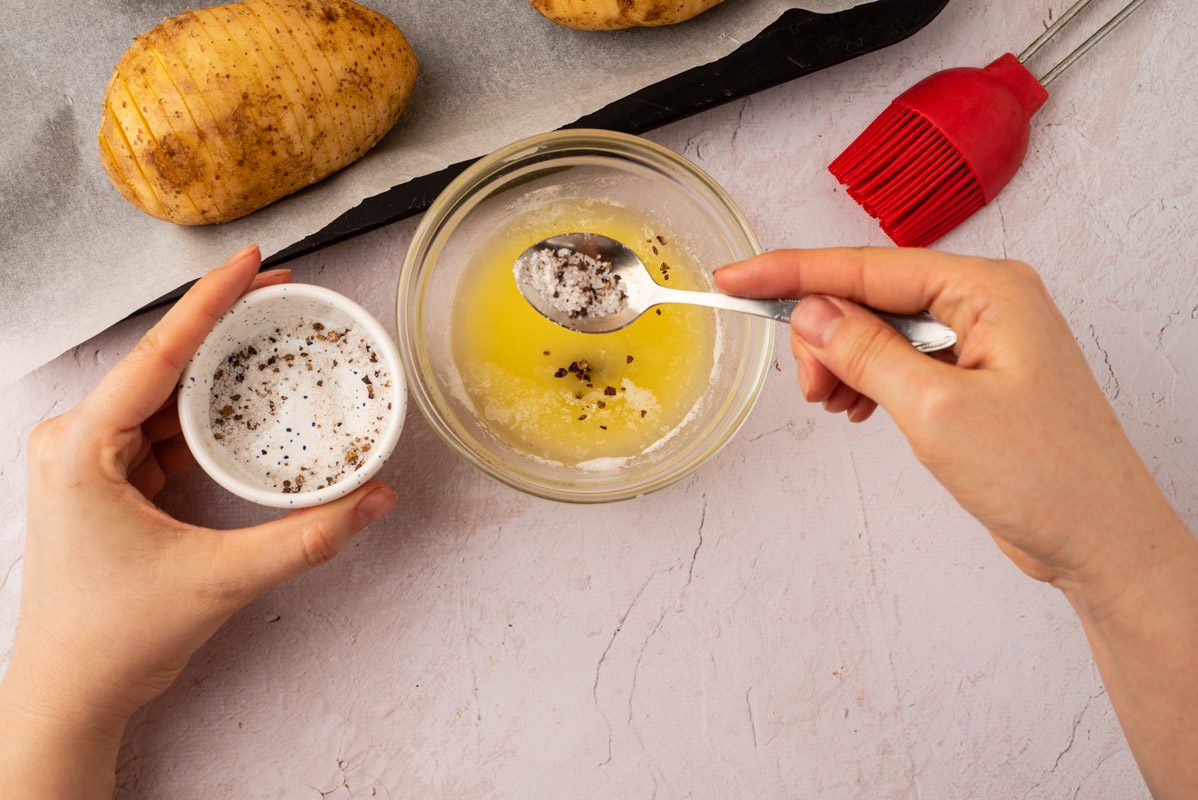 Spread it evenly on top.

Combine the olive oil, butter, salt, and pepper in a small bowl.

Bake for 50 to 60 minutes, or until tender. Take the potatoes out of the oven and cool for 5 minutes. 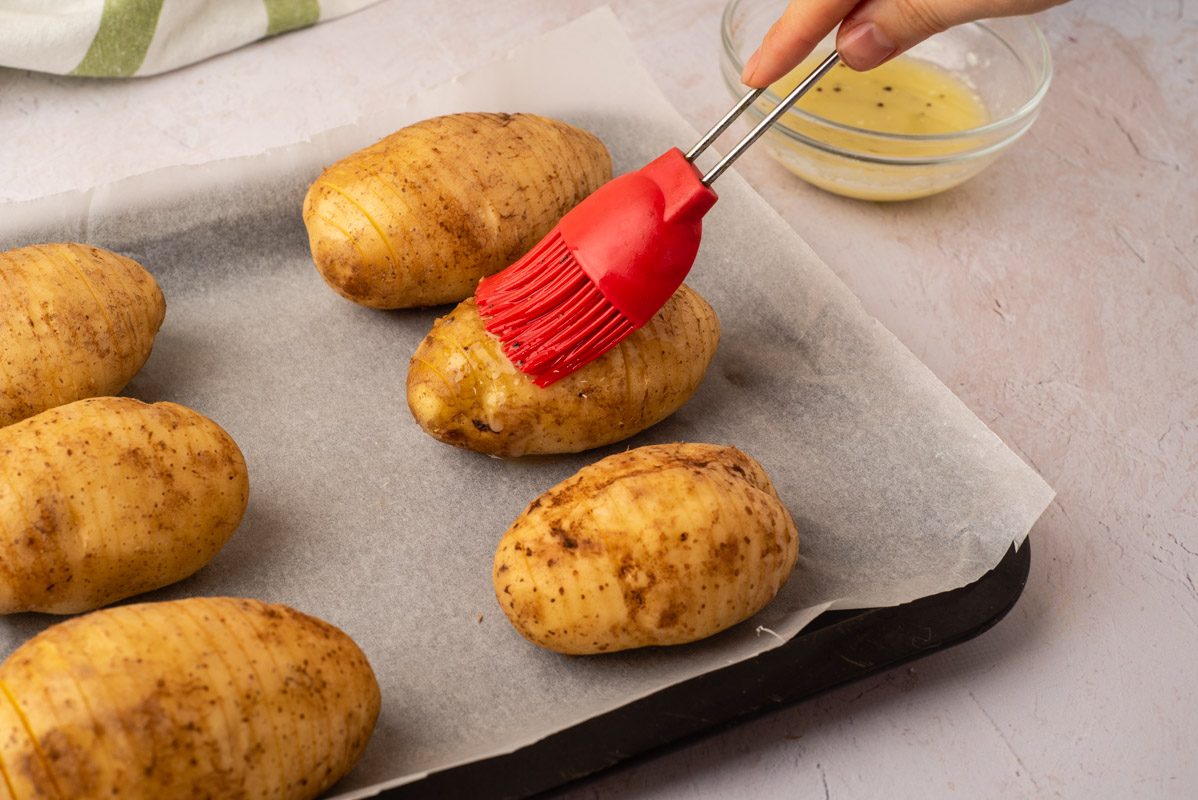 Cut the cheese into 1-inch squares.

Brush the mixture generously over the potatoes, and in between the cuts.

Place the cheese in between the cuts in the potatoes. 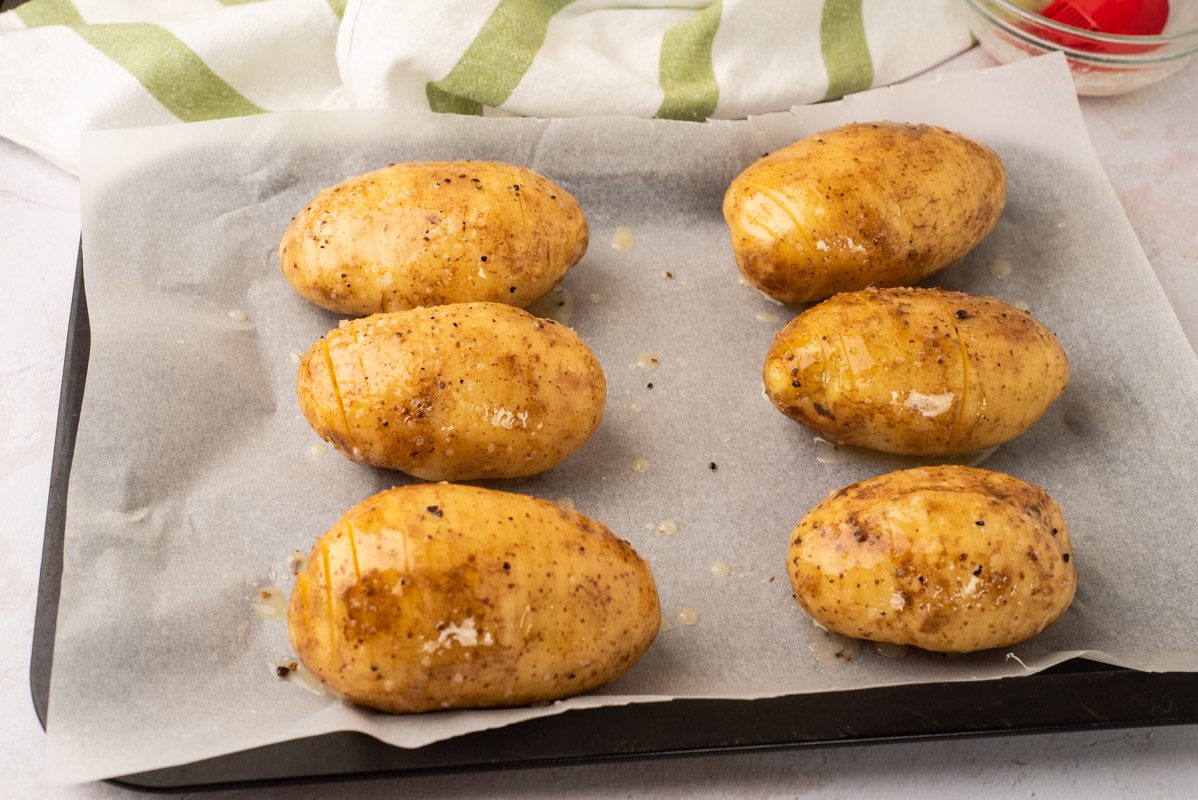 Bake for 3 to 5 minutes more, or until the cheese has melted.

Spread it evenly on top.

Garnish the potatoes with sour cream, bacon, and spring onions. 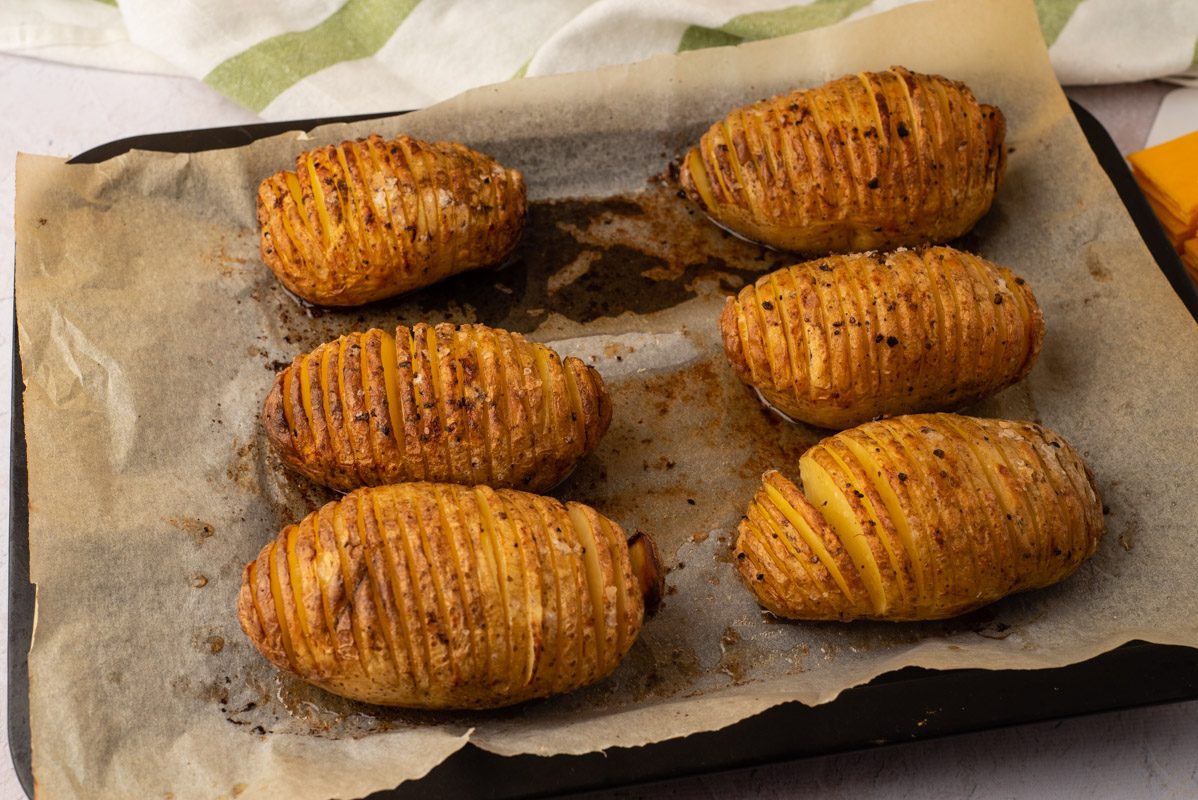 If you don't have sour cream, crème fraiche is a tasty substitute. 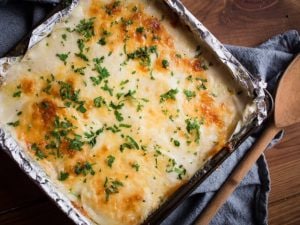 Scalloped Potatoes: the easy recipe for a classic, layered side dish
Another recipe you need to try 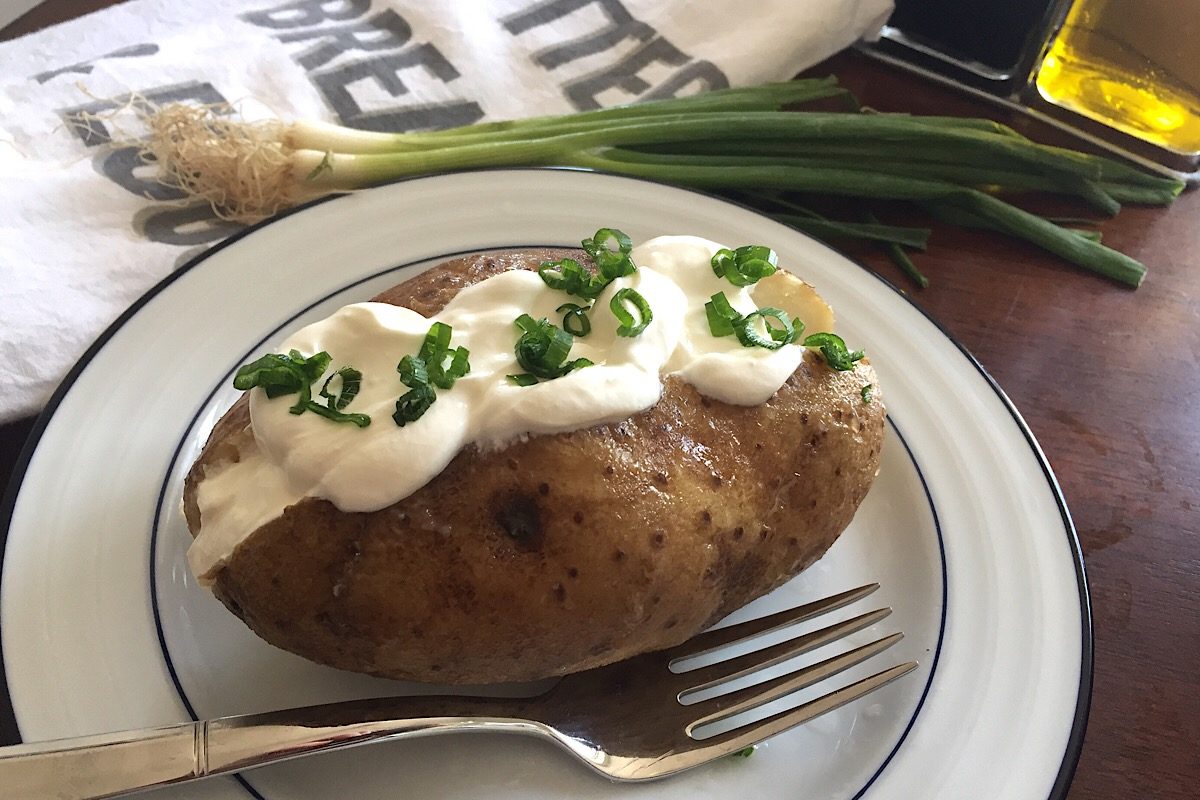 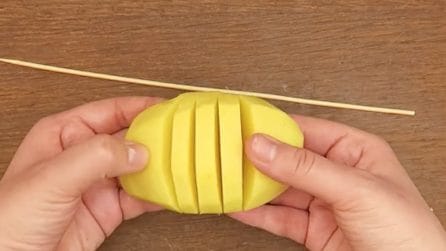 Stuffed Hasselback potatoes: a great idea for preparing a unique and tasty side dish!
Views
124.276 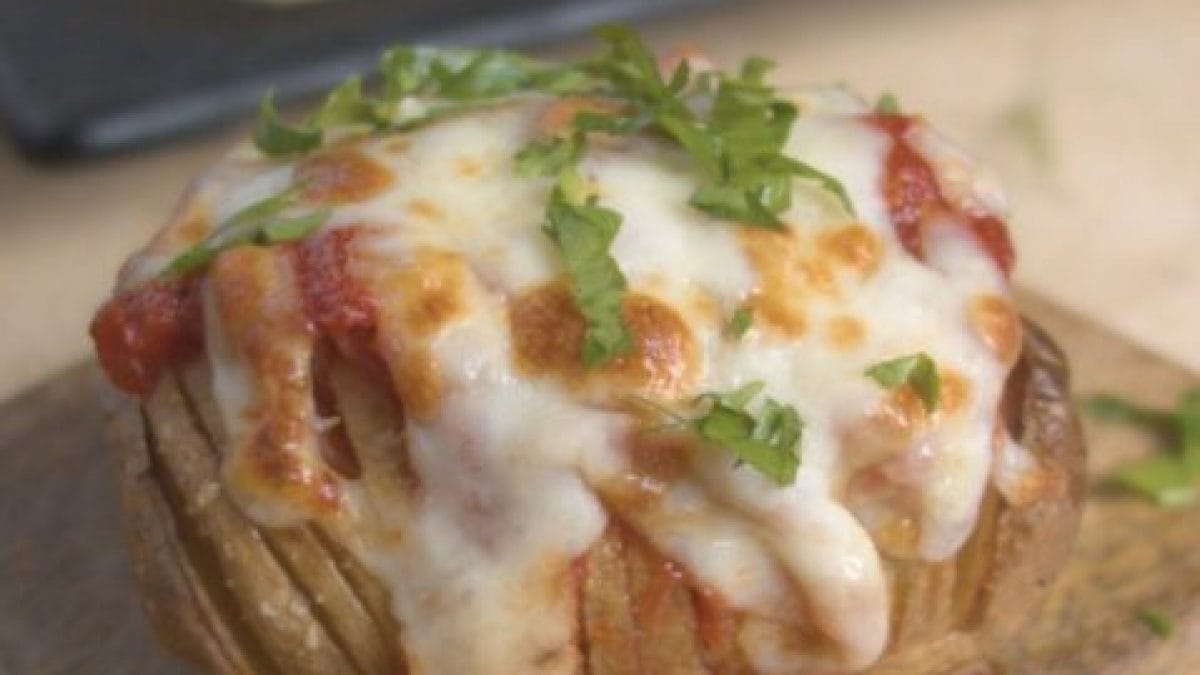 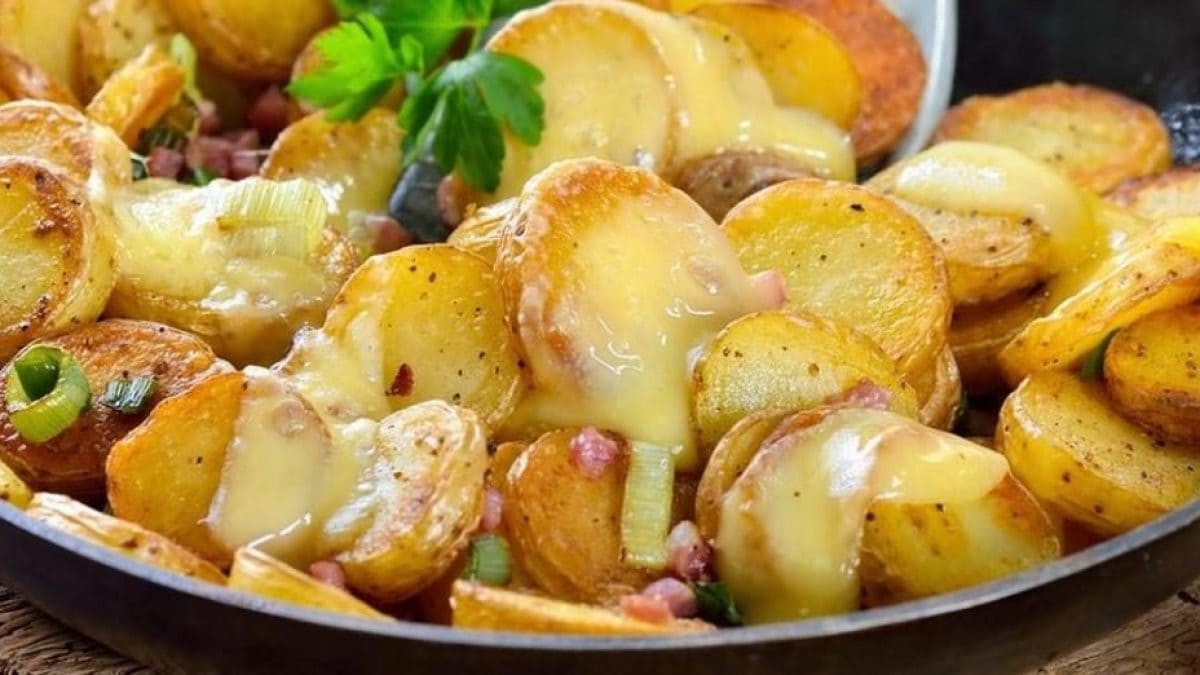