It’s summer and that means it’s officially popsicle time! Popsicles are great for cooling you down on a hot summer’s day, and there’s an endless variety of popsicles you can—try a new one each weekend. These Homemade Watermelon Popsicles are easy to make and are also super refreshing. The name comes not only from the watermelon as the main ingredient, the popsicles are also creatively made to look like watermelon slices. They even have chocolate chip “seeds”. Using a food processor, or blender, it’s quick to make. Simply fill your popsicle maker, and wait to freeze. Each bite is a pop of fruity flavor—it might just be your new favorite!

How to make Watermelon Popsicles

The first watermelon layer is made by adding the watermelon cubes, sugar, and lemon juice to a food processor. The mixture is blended until smooth and added to the popsicle molds. Chocolate chips are then added to resemble the watermelon “seeds”. The molds are placed in the freezer until frozen solid.

The next white layer is made by mixing coconut milk and sugar. This is poured over the frozen watermelon layer and placed in the freezer for about 45 minutes. Because the layer is thin, it doesn’t need a long time in the freezer.

For the final kiwi layer, fresh kiwi is pureed with the sugar until smooth. Before the kiwi puree is poured into the molds, it’s first strained through a mesh sieve to remove the seeds. After adding this layer, the popsicles are frozen for another 3 hours.

– If you’re struggling to remove the popsicles, you can run a bit of warm water around the mold. Not too much though, otherwise the popsicles will melt!

– You can make these for toddlers, but leave out the sugar and chocolate chips. The fruits are sweet enough on their own, and you don’t want to risk a choking hazard with the chocolate chips.

– If you want to make a variation for your dogs, then follow the recipe, but omit the chocolate chips and kiwi which can be toxic to dogs.

– How to pick the perfect watermelon. When choosing watermelons, look for the heaviest you can find—the heavier the watermelon, the tastier. You also want to look for a watermelon with a pale-yellow spot, this indicates that it spent some time ripening, and will therefore be sweeter.If you don’t have watermelons, you can use strawberries as a substitute.

How to store Watermelon Popsicles

These Homemade Watermelon Popsicles can be stored in the freezer for up to 3 months. Simply keep them in the popsicle molds and take out as you want.

In a blender, add watermelon, 2 Tbsp granulated sugar and lemon juice and puree.

Pour watermelon mixture into popsicle molds filling each about 2/3.

Sprinkle the chocolate chips over the tops and mix. Freeze 3 1/2 hours.

Mix together coconut milk with 1 1/2 Tbsp sugar until sugar has dissolved. Pour a tablespoon of the coconut milk over watermelon layer.

Insert a popsicle stick in each mold, then freeze for 45 minutes.

If you don’t have popsicle molds, use small paper cups, and when the popsicles are frozen, you simply remove the paper cups and discard. 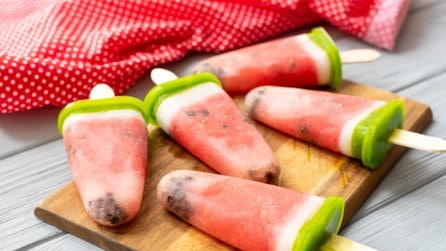 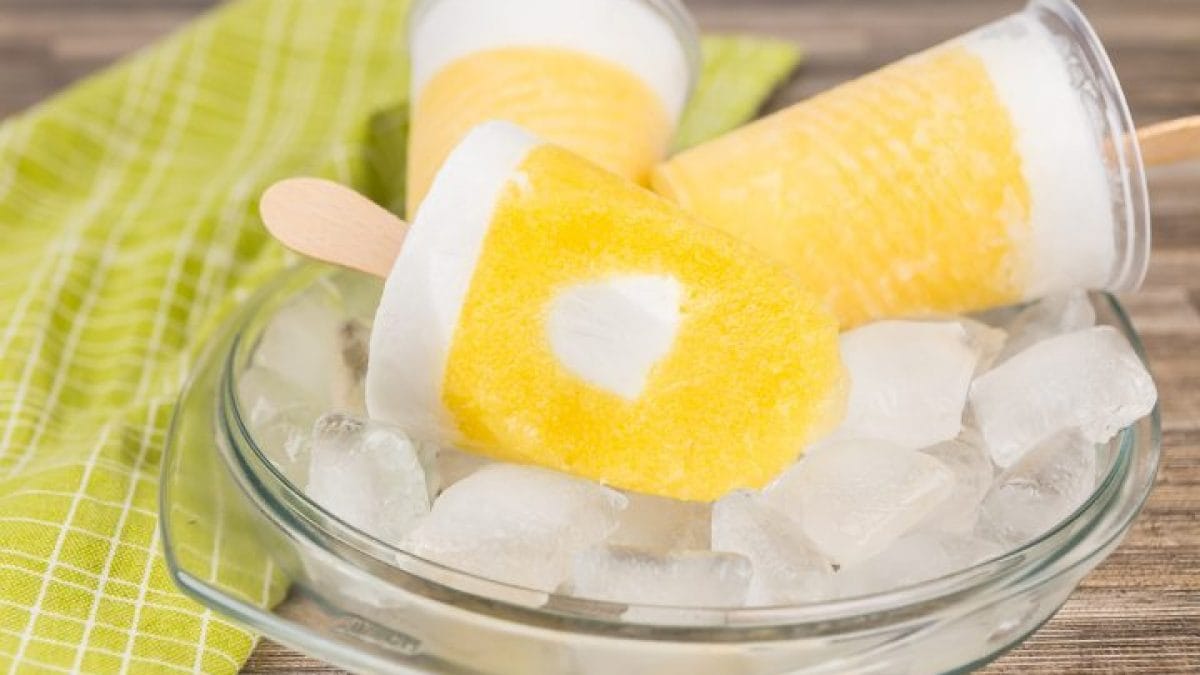 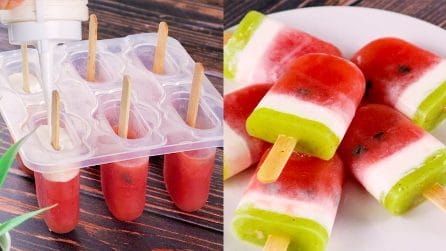 Watermelon popsicles: the perfect ice cream for your summer!
Views
17.671